The term “Deconstructivism” refers primarily to two inspirations. The first—deconstruction—is a form of philosophical and literary analysis created in the 1960s, which questions and dismantles traditional modes of thought. In its suspicion of objectivity, this particular strain of critical thinking encourages one to think not just of what a text says, but what it does – and what the relationship between the two may be.[3] The latter inspiration is Constructivism, the artistic and architectural movement which began in the twilight years of Tsarist Russia and, once rejected by the Soviet society it initially embraced, dispersed throughout Europe and North America. Although its creators’ admiration for new technologies drove them to design structures of plastic, steel, and glass, they were not bound to pure functionalism; this apparent juxtaposition is perhaps best expressed in their preferred title of “artist-engineers.”[4]

As a mode of design, Deconstructivism is far more difficult to define than many of its predecessors and contemporaries. In the same vein as Postmodernism, Deconstructivism is a reaction to, and rejection of, Modernist architecture; its radically irregular geometry and dynamic forms serve to protest the scientific rationalism that defined and dictated much of architectural practice from the end of the First World War to the 1970s.[5] Despite a similar reactionary basis, Deconstructivism distinguishes itself from the greater body of Postmodernist architecture by its rejection of the latter’s more whimsically ornamental approach, an ironic similarity to the Modernist aesthetic it otherwise seeks to subvert. The end result is something between Modernism and Postmodernism – a destination reached by the seven exhibitors outside the context of a cohesive design movement.[6]

Despite originating from different architects with varying design methodologies, the ten projects displayed in the exhibition in question each celebrated the irregular and the unstable. Eisenman’s featured project, the Biozentrum (Biocenter) for the University of Frankfurt, starts from a rationally ordered series of block units with shapes derived from the protein sequences which compose DNA, all placed along a thin, transparent spine. The basic forms of the blocks are then distorted, with some expressed as solids and others as voids penetrating the ground. As positive and negative volumes intersect in wildly varying manners, the orderly Modernist template is fractured, resulting in the dynamic instability which characterized each exhibited project.[7]

Frank Gehry’s two contributions, his own home and the Familian Home, appear as architecture in the midst of transformation. Both projects are characterized by volumes which appear to be bursting from within more traditional structures, with both the emergent elements and the interstitial spaces realized in wood framing, sheets of glass, and—in his own home—obliquely angled planes of chain-link. While the Familian House was a new construction, his work on his own Santa Monica home was as much a work in progress as its dynamic spatial narrative seemed to suggest, as he gradually converted a typical suburban home into his personal statement on the relationships between, and within, forms.[8]

The Peak, Zaha Hadid’s chosen work, was a 1983 competition entry for a club in the hills above Hong Kong. Its four long volumes read as a collection of Hong Kong highrises tipped onto their sides and woven into the mountainous topography to which they are anchored. Its design, drafted in the days before computer modeling could truly begin to assist architects in realizing complex geometries, relied heavily on Hadid’s elaborately expressive concept paintings and diagrams, which presented distorted perspectival views not easily translated into built form.[9]

As he had once been a tutor of Hadid’s at the Architectural Association in London, it is unsurprising that Rem Koolhaas’ Rotterdam Building and Observation Tower was based on a similar painted axonometric concept study.[10] Where The Peak was emphatically horizontal, the Rotterdam Building was defined by what could either appear to be a row of stone slabs set against glass backing, or a stone slab with a row of glass towers attached. The latter is closer to the truth, as four glazed towers protrude from, or recede into, a stone-clad spine at varying angles. At one end of the building, an orthogonal glass tower stands almost detached from its counterparts, a symbol of Modernism connected only tenuously to its disorderly counterparts by a narrow skybridge. On the opposite end, an angled steel tower takes on the appearance of a Constructivist monument, the tension between the Constructivist and the Modernist apparently resulting in the span of Deconstructivism between them.[11]

The end of the Cold War and the reunification of East and West Germany meant that Daniel Libeskind’s exhibition project, his winning entry to the City Edge Competition, never progressed beyond drawings and models.[12] The project, standing within view of the Berlin Wall, was a commentary on the manner in which it cut apart and fragmented the old city. Formally, Libeskind’s design was the simplest project in the exhibition: a long rectangular slab which cut through West Berlin like the wall it was responding to. However, rather than truly divide the neighborhood, Libeskind tilted the slab along its length, with one end rising a full ten stories above the ground to create an open public space below while overlooking the Berlin Wall. Within the otherwise orthogonal slab is a jumble of tilted structural members, angled against one another and performing their mundane responsibility of supporting the building with Constructivist flair.[13]

In winning the competition to design Paris’ Parc de La Villette in 1982, Bernard Tschumi later noted that he had not been competing with fellow finalist Rem Koolhaas; rather, Deconstructivism itself had triumphed over Postmodernism, which was championed in this case by architect Leon Krier.[14] Tschumi’s design superimposed three systems: a grid of red metal cubes, a set of classical axes, and surfaces rendered in geometric figures. The interplay of the three systems causes warping and distortion in each, recognizable for what they are and yet irrevocably altered into something in tension with its neighbors. As a whole, the park is a study in the deviation from pure architectural form.[15]

The sole multi-architect firm to be chosen for the exhibition, Coop Himmelblau also presented the most projects. Two were set in the firm’s native Vienna and, like Gehry’s examples, one was a renovation and the other a new construction. The Rooftop Remodeling of a traditional Viennese apartment building saw its structure extrapolated into an apparent chaos of beams which, in its visual tension, appeared like the wing of a giant organism which had engulfed the building. Their Apartment Building, with its tilted rectangular volume peeled open with obliquely protruding beams and peeled metal skin, could almost be a marriage of Libeskind and Gehry’s projects in the exhibition. Coop Himmelblau’s third project, a skyscraper along the Elbe River in Hamburg, distorts and subverts the traditional expectations of a skyscraper: it is fractured rather than monolithic, held together by irregularly angled ligaments which give the impression that the tower is on the verge of falling to pieces.[16]

In his preface for the publication released with the exhibition, Johnson freely admitted that the willfully irregular, even anarchic forms found in Deconstructivist architecture “shock the eye of an old modernist like [him]self.”[17] Whatever one’s response to what Johnson termed ‘violated perfection,’ it cannot be denied that the seven architects in the exhibition, along with their contemporaries, collectively defined the path of architectural practice in the following decades; and although most have since moved on from Deconstructivism, its central goal of questioning, dismantling, and reconstituting architectural standards remains. 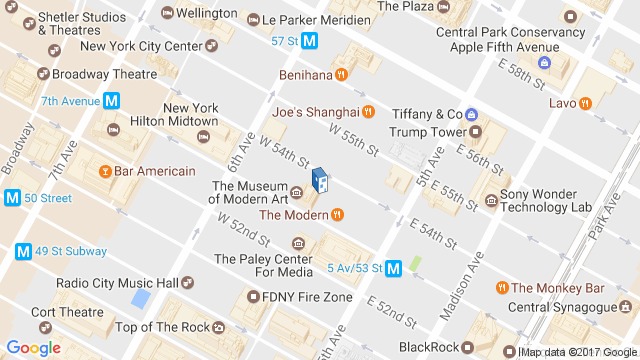 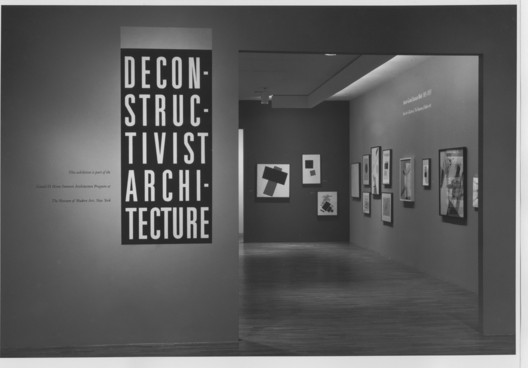