A team of architects and engineers at the Politecnico di Milano in Italy have unveiled Atropos, a six-axis robotic arm capable of printing continuous fiber composites. The one of a kind robot was developed by +Lab, the 3D printing laboratory at the Politecnico, who have taken inspiration from fibres found in the natural world. Through a technology known as Continuous Fiber Composites Smart Manufacturing, Atropos has the potential to create large, complex structures to aid the design and construction process. 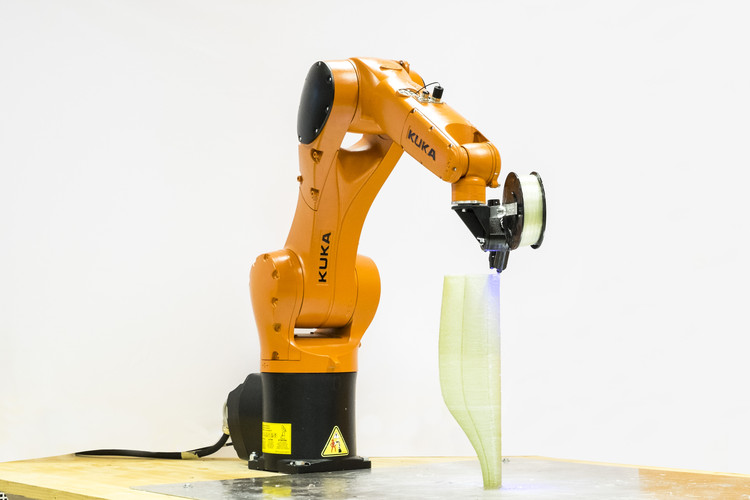 While developing Atropos, the Politecnico team drew inspiration from the natural world, studying the fiber-based behavior of spiders and silkworms. Consideration was also given to the fibrous workings of human muscles and tendons, resulting in a six-axis robotic arm with versatile movement, free from excessive mechanisms.

The journey towards an Atropos-made object begins with a computer model generated through the 3D modeling software Rhinoceros. Using the algorithms editor Grasshopper, the path and motion of Atropos are calculated, allowing the robotic arm to begin the 3D printing process. The material itself uses thermosetting plastic - not the thermoplastic more commonly found in 3D printing operations - with fiber embedded into th print. Currently, the process uses fiberglass, however the team is working on introducing other fibers such as carbon fiber.

As Atropos dispenses the print, the resin is hardened by a UV light source near the print head, in many cases removing the need for temporary supports. The Politecnico di Milano team have also envisaged ways to make the process scalable, enabling the production of everything from extremely small and precise structures, to large complex products for use by architects and engineers.

"Based on the results obtained and optimum implementation, we are confident of the possibility to effectively use this technology for additive manufacturing of high performance, lightweight products for markets where those characteristics are essential," explain the +Lab team in a press release. "These characteristics, combined with the ease of scaling, makes this technology unique and enables opening up new, unimaginable productive scenarios to the implementation of composites in the world of building construction."

The team behind Atropos are confident in its potential for use in architecture and construction. Continuous Fiber Composites Smart Manufacturing can create 3D objects from a CAD file without the need for a mold, enabling the quick, cost-efficient creation of complex shapes. If upscaled, the technology could generate components covering several meters, such as façade systems complete with internal trusses and cores.

Robots fascinate us. Their ability to move and act autonomously is visually and intellectually seductive. We write about them, put them in movies, and watch them elevate menial tasks like turning a doorknob into an act of technological genius. For years, they have been employed by industrial manufacturers, but until recently, never quite considered seriously by architects. 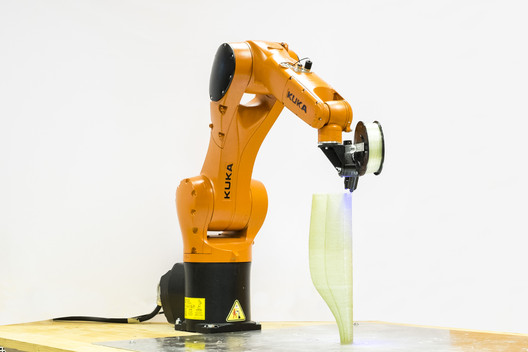