Robots fascinate us. Their ability to move and act autonomously is visually and intellectually seductive. We write about them, put them in movies, and watch them elevate menial tasks like turning a doorknob into an act of technological genius. For years, they have been employed by industrial manufacturers, but until recently, never quite considered seriously by architects. Sure, some architects might have let their imaginations wander, like Archigram did for their "Walking City", but not many thought to actually make architecture with robots. Now, in our age of digitalization, virtualization, and automation, the relationship between architects and robots seems to be blooming...check it out. 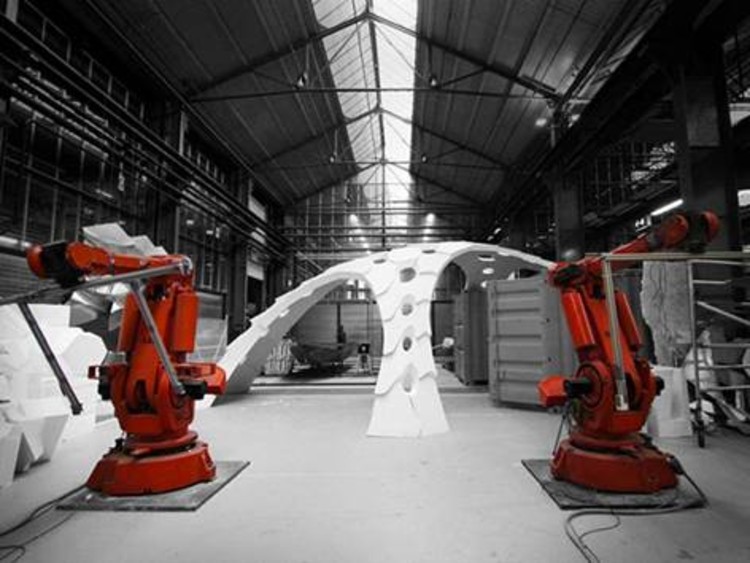 The architectural interest in robotics is well represented by the recent Rob/Arch 2012 conference in Vienna. The conference attempted “to create a platform that shows the innovative uses of robotic fabrication in the creative industry, and brings together members of industry and academia, as well as architects, artists and designers,” according to founders Sigrid Brell-Cokcan and Johannes Braumann. It also provided architects with “not only the possibility to present their research and projects to a wide audience consisting of both members of academia and industry, but also to take part in robot workshops distributed at partner workshops all over Europe.”

The technologies for controlling robotic machines, robot arms in particular, are especially adaptable for a transition into architecture and design. Out of a collaboration between KUKA (a robot manufacturer), Rhinocerous (NURBS modeling program), and Grasshopper (Rhino Plugin), KUKA/prc allows designers to not only control robots with a program already widespread in the architectural profession, but to simulate the actual fabrication process digitally. This visual interface and real time simulation allowed an artist with no previous computer modeling experience to digitally design and robotically fabricate a 17mx23m steel arch structure, titled the "Red Bull Arch".

At ETH Zurich, Gramazio & Kohler, an architectural partnership that is especially known for its contribution to digital fabrication and robotic construction, taught at class using a robot arm to lay bricks. This is the course as they describe it:

“If the basic manufacturing conditions of architecture shift from manual work to digital fabrication, what design potential is there for one of the oldest and most widespread architectural elements -- the brick? Students investigated this question in a four-week workshop, designing brick walls to be fabricated by an industrial robot. Unlike a mason, the robot has the ability to position each individual brick in a different way without optical reference or measurement, i.e. without extra effort. To exploit this potential, the students developed algorithmic design tools that informed the bricks of their spatial disposition according to procedural logics. Positioning this way it was possible to draft a brick wall in which each of over 400 bricks took up a specific position and rotation in space. The students defined not the geometry of the wall, but the constructive logic according to which the material was organised in a particular temporal order, and which thus produced an architectonic form.”


Though robot arms are currently the most prevalent form of robotics in architecture, architects and designers have begun to employ other, and sometimes more radical, robotic strategies for design. Gramazio & Kohler, in collaboration with Raffaello d'Andrea recently put together an exhibition titled ‘Flight Assembled Architecture’ for which small quad-rotor helicopter bots assembled a 6m-tall and 3.5m wide tower out of 1500 polystyrene foam blocks in Orléans, France.

Stephen A. Gage and Will Thorne explore the potential of robotics in automated building facades. In an article in Technoetic Arts last year, they explained what they call “edge monkeys”, a proposed system of small robots that would regulate building facades, including energy usage and indoor conditions, by checking thermostats, closing windows, adjusting blinds, etc. They would even communicate with building users who they identify as wasting energy.


Peter Testa and Devyn Weiser, partners at Testa/Weiser and faculty of Sci/Arc believe that the potential of the robot arm is in coordinated groups working together. With the construction of Sci/Arc's new "Robot House", which is equipped with five new robot arms, they intend to teach students to explore the collaborative movement of robots working in parallel, which provides a process different from the typically linear sequence of design, program, fabricate. They see robot arms as not just fabricators or laborers, but as a medium fully involved in the design and construction process. They call it a “real-time…platform” that can be advantageously unpredictable. Ultimately, they plan to begin developing these robotic groups for experiments in designing with emergent and agent-based AI systems, which rely on unpredictable outcomes through strictly defined logics and presets. Additionally, they expect that robot arms will become sophisticated enough to work in tight and complex spatial conditions, enabling them to work directly on the construction site.