The strength of Dutch Design Week (DDW), held annually at the end of October, lies primarily in product design. Although the event has expanded over the past five years to incorporate more fashion, graphics and architecture, small-scale industrial design has retained its preeminence. Many of the designers on show in this year's edition, however, have embraced the challenges of other design disciplines and allowed them to feed into their work. But where does product design meet architecture? Building materials and, most notably at the 2016 event, some really nice bricks. Rotterdam-based architect Alison Killing guides us through her top installations.

A number of designers across DDW have been working on ways to put industrial waste to constructive use. Often the result of their research is to have the relevant waste product—be it rotten fruit, broken glass, worn out leather or fragments of stone—crushed down and compressed into, you've guessed it, bricks. What may at first appear reductive nevertheless involves a complex research and design process in order to ensure that the material binds correctly, is able to bear the loads required for its use in construction, and is also aesthetically attractive.

Of the many projects which have travelled this track, two projects stand out. Thomas Missé's From Ash at the Design Academy Eindhoven graduation show takes a large number of the by-products from a coal power plant—fly and bottom ash, water vapour, heat, and the portion of electricity which is wasted without making it to the grid—to create a “geopolymer,” a hard, ceramic-like material, as well as a small number of bricks which incorporate a shiny, black, coal-like aggregate.

Tom van Soest is a graduate of the Design Academy and is showing at DDW as part of the Young Designer section of the Dutch Design Awards. His graduation work, from 2012, is also a study of transforming waste products into bricks – this time, waste from the construction industry. It is a strength of the Academy that many of their students go on to develop their thesis work into industrial products for sale and van Soest is far from the only designer at DDW showing professional work that was initially developed during their study days. In the past four years van Soest has worked with the industry in developing the bricks to meet the technical standards for new build construction in The Netherlands, and to create a company—"Stonecycling"—that can produce them at scale. On display is one of the company's designs, incorporating crushed glass to produce a wall with a shimmering, silvery surface.

Bricks of the Future

Over at the Klokgebouw, students from Amsterdam's Academie van Bouwkunst have displayed their designs for the bricks of the future. Producing bricks is both energy and material intensive, so the students have spent the past three months working with three brick manufacturers from across The Netherlands, experimenting with substitute materials and shapes that require less energy to make. The resulting forms—zigzags, crosses, and lozenges—also produce interesting textural effects as they are stacked into walls.

The best brick on show however, goes to Rotterdam-based practice MVRDV, and the solid glass block that they developed for Chanel's Amsterdam storefront together with the Technical University at Delft, ABT and Poesia. The brick is part of the Product section of the Dutch Design Awards, on show here as an object in its own right rather than simply one element, albeit a notable one, in a wider architecture project. They're displayed, unglued, in a low wall through which light can refract and where, since they're unfixed, they can be handled by visitors.

Heavier than they initially appear, smoothly polished, and with rounded corners they come across as an unlikely construction material – they lack the rough edges and appearance of toughness you would typically expect. They look instead like really expensive paperweights, and yet they are also able to meet the stringent demands of being the main structural element in a load bearing facade. MVRDV's larger claim for them—that creating buildings with transparent glass walls will transform architecture and our cities—didn't stack up in the early 20th Century, and almost certainly doesn't stack up now. That said the bricks that they have created are an impressive aesthetic and technical achievement.

The strength of Dutch Design Week lies in the close links between the work of design schools and the younger designers who are driven primarily by the exploration of concepts, alongside wider industry, whose main interest is in presenting goods for sale. 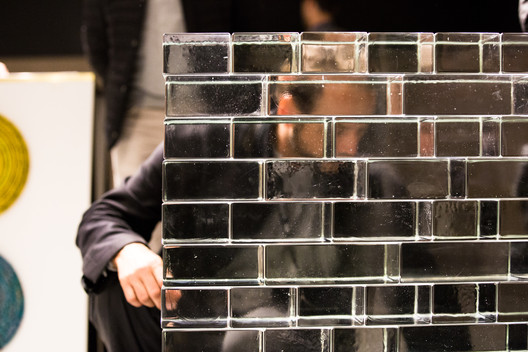