Save
The Strange Habits of Top Architects
Share
Or
Copy

Well-known architects are easy to admire or dismiss from afar, but up close, oddly humanizing habits often come to light. However, while we all have our quirks, most people's humanizing habits don't give an insight into how they became one of the most notable figures in their field of work. The following habits of several top architects reveal parts of their creative process, how they relax, or simply parts of their identity. Some are inspiring and some are surprising, but all give a small insight into the mental qualities that are required to be reach the peak of the architectural profession—from an exceptional work drive to an embrace of eccentricity (and a few more interesting qualities besides).

1. Playing With the Same Toy All Day (The Eameses)

Charles and Ray Eames were prolific in their work, producing over 900 multidisciplinary designs. The Musical Tower was one of these, a 5-meter high rearrangeable xylophone tower. For new staff members, the entire first day would be spent playing with this one toy. This creative initiation was important for the Eameses, who believed that spending a day listening to and observing someone’s musical experiments provided valuable insight to their personality.

“Architectural art cannot be created in an office-like environment”, Alvar Aalto once said. Taking this to extremes, Aalto was known to have “drank like a fish,” and boozing in the office was common—aiming, of course, for an artistic bohemian air rather than unproductive drunkenness. [1]

Architects have long been associated with unusual sleep patterns, with some more unusual than others. Leonardo da Vinci, Buckminster Fuller and Frank Lloyd Wright were all polyphasic sleepers, taking short naps every three or four hours instead of a long night’s sleep, while Louis Kahn would spend his daylight hours teaching, napping until 10:30pm, and then beginning a “day” of work at his office. [2]

Climbing a Norwegian mountain may be considered an odd team building exercise for architectural firms, unless your firm is Snøhetta. For Snøhetta, whose founding inspiration and namesake is a mountain said to house Norse gods, an annual trip to climb that very mountain makes a lot more sense. The purpose of the trip has changed as the firm has grown: “We use the time to talk about what we’re doing and where we want to go," says co-founder Craig Dykers. "We used to go just for the sake of climbing but now it’s got to have more meaning.”

There are many stories of Zaha Hadid that suggest the most important person in her life was herself. Examples include being several hours late for a Vogue photoshoot in her own home or only furnishing her apartment with objects she designed herself. While many of those in her inner circle have attested to her kind heart, this attitude of self-love was also also the heart of her headstrong philosophy; in her own words, "I never took no for an answer. I never sat back and said 'walk all over me, it's OK.'”

The inspirations behind Eileen Gray’s designs were often people she loved. The hallmark of this was perhaps the ill-fated E.1027, built originally for her then-lover Jean Badovici. Even the name itself was “code for an affair of the heart.” E stood for Eileen, while the numbers corresponded to letters in the alphabet for J, B and G, signifying Jean, Badovici and Gray—her name “holding his.”

7. Having Sex Several Times a Day, Even if You’re Eighty (Frank Lloyd Wright)

Frank Lloyd Wright was said to have an “inexhaustible supply of creative energy” that allowed him to maintain a habit of only beginning drawings for clients a few hours before they were due to present. His wife also reported a similar inexhaustible supply, but one of sexual energy. She claimed that even at eighty-five, he could go at it twice or thrice a day. She even sought medical advice and was offered potassium nitrate, thought to decrease a man’s sex drive, but decided against it in the end. [2]

When asked what part of her work brought her joy, Denise Scott Brown admitted to essentially creeping on people using her building. Visiting the Perelman Quadrangle at the University of Pennsylvania, she observed thirty or so students sitting on the rising steps “like bees in a hive,” just as she had envisioned. Taking her to be some “old lady in a skirt” who they did not know, they simply looked puzzled and could not understand why she was grinning broadly at them. [3]

I.M. Pei has noted how over his long career he has come to rely less on drawing on paper, and more on drawing in his mind. For Pei, much of his best thinking is done in bed at night with the lights out, sometimes with a trip to the bathroom to scribble ideas down. If it didn’t look as good on paper as in his mind, it would be back to bed to think some more. This nocturnal process meant that even for him it was hard to distinguish the sources of his ideas, which came to be increasingly dream-like.

You are what you eat, or so they say. So for an architect who championed color, it’s perhaps not surprising that Luis Barragán was known to order entirely pink-colored meals, such as sherry-drizzled melon halves.

11. Taking Your Porsche out for a Spin (Ricardo Scofidio)

We all have preferred ways to blow off steam and for Ricardo Scofidio, of Diller Scofidio + Renfro, that includes a 1963 vanilla Porsche. Having also owned a Saab 96, Alfa Romeo 2000 GTV and Jaguar XK150, Scofidio is a clear car enthusiast but also creatively credits the mind-clearing abilities of pure speed. 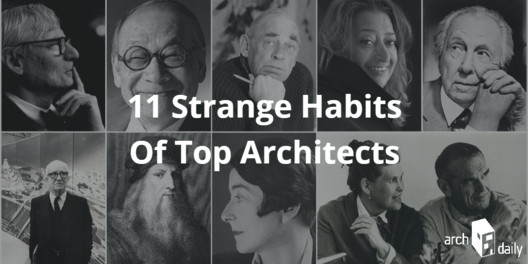