Save
When Droplets Create Space: A Look at Liquid Architecture
Share
Or
Copy

Throughout the past century, architecture's relationship with water has developed along a variety of different paths. With his “Fallingwater” house, for example, the American master Frank Lloyd Wright confronted the dramatic flow of water with strong horizontal lines to heighten the experience of nature. Since then, architecture's use of water has become more varied and complex. A space made almost purely of water emerged with Isamu Noguchi's design at the Osaka World Expo: glistening water appeared to fall from nowhere and glowed in the dark. Later with digitalization and fluid forms as design parameters, the focus shifted towards liquid architecture made of water and light. The interpretations have ranged from architectural forms modeled after literal drops of water, like Bernhard Franken´s visionary “Bubble” for BMW, to spectacular walk-in installations made of lines of water, transformed into pixels by light. 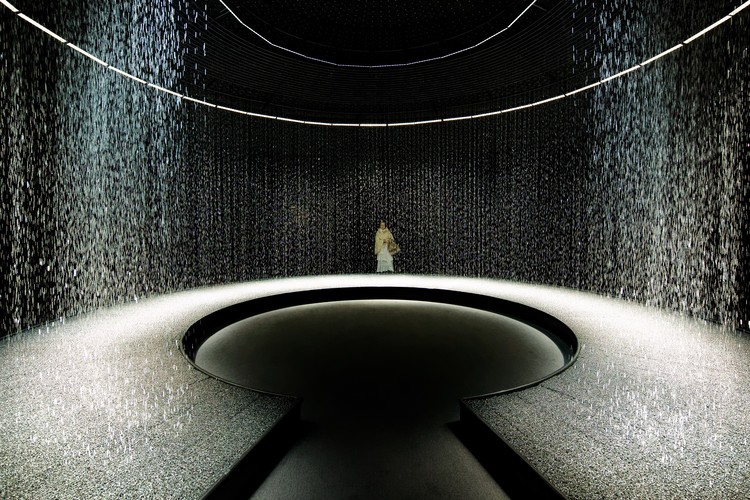 NOX fueled the discussion about the fluidity of water and light with their exhibition of real and virtual water at the Htwo0expo at Neeltje Jans, Netherlands, in 1997. Here, in a windowless and amorphous interior structure, Lars Spuybroek assigned the real water the role of being non-interactive, creating a sprayed mist that drained over the floors. As a counterpoint NOX introduced virtual water through interactive projections with sensors, which transformed wave patterns into ripples and blobs culminating in fascinating viewer experiences of water and light.

In contrast, the Iceland pavilion at Expo 2000 welcomed visitors with a water façade. Iceland, surrounded by water and boasting numerous spouting geysers on the island, presented a striking blue membrane cube in Hanover. A flowing film of water turned the pavilion into a cubic waterfall. With the sun shining on the cascading ripples and thereby reflecting the moving clouds, the façade generated a fresh and sparkling impression of the environment. In addition, the Icelandic pavilion revealed an artificial geyser in the interior, where guests could climb up a spiral ramp to admire the power of water. Thus the installation played with the a strong polarity of bright, brilliant falling water outside versus a dark geyser illuminated with stage lighting effects inside. After the Expo, the 28-meter-tall blue cube was recycled to present natural phenomena at the Universe amusement park in Nordborg, Denmark.

In comparison to the falling water theme at Hanover, the Swiss Expo in Yverdon-Les-Bains in 2002 gained international recognition with the remarkable “Blur Building” by Diller Scofidio + Renfro. Fine mist from 35,000 high-pressure nozzles created an artificial cloud, which changed with the strength and direction of the wind, altering where the tourists could walk in order to explore the effect of an optical white out. By opening their mouths, the visitors could actually drink the building. After ascending to the deck, a view opened softly into the blue sky. In that way the architects confronted the public with extreme interplays of light and water, from a diffuse white in the inside to brilliant fine water droplets in the sun and ultimately colorful rainbow effects. After sunset, another image appeared when the architecture turned into a powerful and mystical luminous cloud on Lake Neuchâtel.

However, several other architects and artists have also explored the effects of light and water in a strictly controlled interior environment. The Danish-Icelandic artist Olafur Eliasson tried to generate an image of freezing water drops in 2002. Deep down in the cellar of a former brewery, Eliasson benefited from a completely dark room as a black background at the Centre for International Light Art in Unna, Germany. Two parallel curtains of water frame a corridor made of water falling 5 meters to the ground. Due to bright strobe lights with a cold color temperature, the falling drops seem as if they are frozen. The mix of the loud sound of falling water droplets in the live space and the harsh contrast of white drops in a dark space definitely captivates the viewers.

Intrigued by digitalization, the MIT professor Carlo Ratti, together with his team at Carlo Ratti Associati and researchers from MIT Media Lab and MIT Senseable City Lab, created the “Digital Water Pavilion” for the Zaragoza Expo, Spain, in 2008. The digitally controlled water droplets enabled him to create two-dimensional patterns with water pixels, and to liquidate the traditional building wall. For visitors the curtain of water opened interactively, and the vertically moving curtain exposed a fascinating playful pattern. In the evening the illumination intensified the contrast of the bright falling curtain against the dark background.

Random International went beyond these two dimensional water curtains with their three-dimensional water installation “Rain Room” at the Barbican Centre in London in 2012. The visitor could actually walk through the falling water without getting wet, Thanks to a series of cameras which created a 3D-map of the presence and movement of visitors, a section of “dry pixels” was created in the Rain Room wherever there was a human presence. A bright spotlight at eye level at the end of the dark curving corridor attracted the viewers with a glaring light and sharply rendered all vertical lines of rain for an experiment that was rich in contrast.

When bringing the stroboscopic light effect, used by Eliasson in Unna, together with the constant illumination in the Rain Room by Random International, a new dimension of light experience emerges, where the water can transform from droplets into lines. DGT Architects used this approach in their rectangular installation “Luce Tempo Luogo” for the Toshiba Milano Salone in 2011. With an interval of seven microseconds they materialized a single point of light with water. However, over several minutes the viewers could follow the gradual transformation of water pixels into lines while the room changed from a dimly lit room to a space exclusively made of illuminated water. In 2015 DGT Architects adapted this concept to a circular layout for the “Light in Water” installation, as part of the exhibition “Lumière – The Play of Brilliants” in Paris. In addition, this project included a subtle light change regarding the color temperature, from a warm white to neutral white for the outer ring while the inner ring stayed constant in neutral white.

In comparison to the walk-in and self-contained installations by the artists and architects mentioned above, Shiro Takatani and the light artist Christian Partos regard the “3d Water Matrix” cube as a medium and not as a piece of art – comparable with the way a piano is a medium for the music it sends. The digitally controlled waterfall with a luminous ceiling enables numerous compositions in which the water pixels form lines, planes or amorphous volumes merging fluently from one graphical pattern to the next and thereby creating a dancing liquid sculpture. However, Takatani involved the frequency of light as another parameter for compiling patterns in his “ST/LL” work in 2015. Based on the light intervals of the field overhead he generated extraordinary images, where the liquid pixels seem to freeze in planes and volumes.

With the digitalization of falling water the element has relinquished its natural flow and ripples, and turned into sophisticated pixel patterns for liquid spaces. The response to the distinction of water pixels and non-pixel spaces has led to high-contrast installations of white droplets against black rooms. Consequently the fascination for digital process has extended to include light as well, with designers often preferring electrical light instead of natural daylight for its option of precise control. Due to the modulation of these droplets from pixels to falling vertical streams, attention has shifted from conventional light parameters like brightness or color temperature towards the timing and frequency of lighting. As the interplay of digital water pixels and digital light control has just started, we might therefore expect many more solutions for smart flying pixels which glow in the future.

Light matters, a monthly column on light and space, is written by Thomas Schielke. Based in Germany, he is fascinated by architectural lighting and works as an editor for the lighting company ERCO. He has published numerous articles and co-authored the books “Light Perspectives” and “SuperLux”. For more information check www.erco.com, www.arclighting.de or follow him @arcspaces.