Through Raise/Raze, the firm reused plastic balls from Snarkitecture’s “The Beach” at the National Building Museum to create an installation in DC’s Dupont Underground, a contemporary arts and culture space repurposed from an abandoned trolley station. Raise/Raze opened on April 30, and closed on June 1.

Located at the Socrates Sculpture Park in Queens, New York, Sticks is a multi-purpose pavilion space made of standard dimension lumber and accented with scrap wood found on-site. The pavilion opened on July 9, and will close December 31. 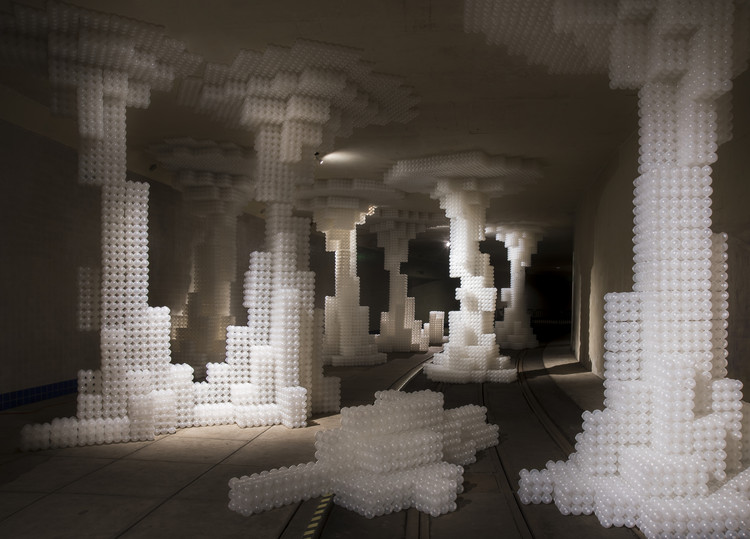 From the architect. The site is a long and narrow curved hallway. Expanding upon this particular site condition, the proposal divides the space into a series of zones that present visitors with unique situations and scenarios, while also reconfiguring how one circulates through the site. When accessing Dupont Underground from the main entrance at New Hampshire Ave, visitors are surrounded by the most compressed zone, a crystalline cave, which forks into two windy paths. The Southward path leads to a forest-like colonnade of twisted trunks and stumps for resting on. Beyond this grove lies a series of large spherical shells that define a meandering path while simultaneously enclosing small pockets of space. As one passes through this valley of domes, a group of scaled down buildings begins to appear; the White House, the Capitol Building, and the Supreme Court Building. Conversely, if at the cave’s foyer one forks towards the North, then the visitor encounters and passes through a space of massive letters and walls of text.

From the architect. Sticks is a straight-forward assembly of standard dimensional lumber interconnected to form a structural space-frame. The system has been molded to fit the existing conditions of the site, but these contextual adaptations extend beyond the realm of the purely functional, and although quite minimal, ornamentally illustrate the strategies being deployed. In addition to providing a sheltered space, Sticks also serves as a storage and display system. The webbing that binds the lumber together protrudes outwards at the facade so as to support an assortment of linear materials. By doing so, scrap material becomes a dynamic decorative element while also shingling away precipitation along the outer wall and diffusing light when placed within the roof trusses. The 18 inch thickness of the structural exoskeleton essentially acts as shelving and is capable of storing sculptural works in progress or serving as a display case for curated events. 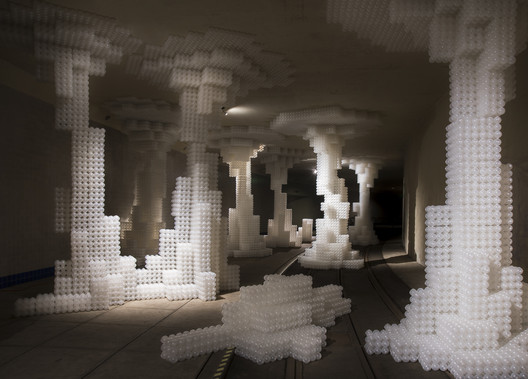