In his book We Have Never Been Modern, philosopher Bruno Latour concludes that an inability to make humanity and nature inherently separate is one of Modernism’s most misguided tropes. Thus, contemporary designers that hope to riff on or have continuity with modernism must understand that architecture, even at its most aestheticized, is not hermetically sealed off from the outside world - and that therefore modernism is not a plateau of design, but another base camp on the road to further refinement.

In Chicago, the city where Modernism reached both its metaphoric and physical peak, Atelier 2B, a team of Yewon Ji, Nicolas Lee, Ryan Otterson, recently shared the top-five prize of the Chicago Architecture Foundation's ChiDesign Competition (part of the Chicago Architecture Biennial) for their project Soft in the Middle: The Collaborative Core. Indebted to the legacy of Mies and the International Style, Atelier 2B proposed a Modernist-tower-redux that (externally at least) is composed of three stacked rectangular volumes bisected with terraces, set back from the street by a large public plaza. The project brief called for “a new center for architecture, design and education,” in a competition judged by critics including Stanley Tigerman, David Adjaye, Ned Cramer, Monica Ponce de Leon, and Billie Tsien. 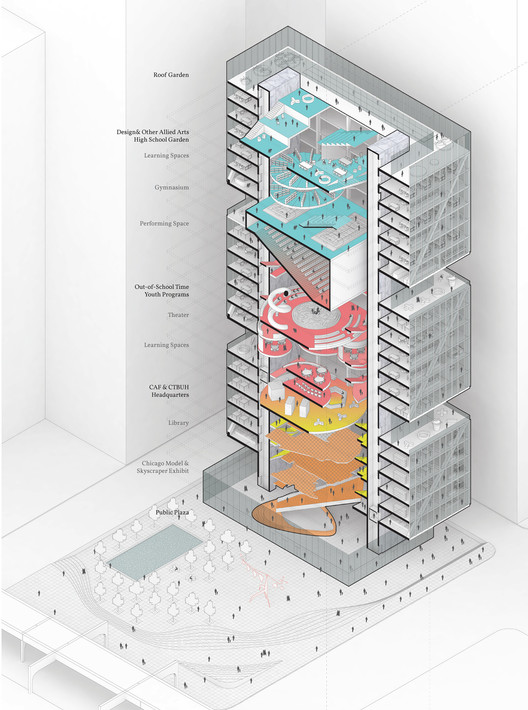 The Atelier 2B team was inspired by the “repetitive” and “mundane” qualities of Mies van der Rohe which emphasize “the plane of the city (the plinth), the dissolution of footprint (the glass lobby), and vertical movement (consolidated core as a centerpiece).” Their design for Soft in the Middle attempts to emulates the first and second principle, but seeks to redefine the third: by pushing circulation away from the core, the building’s center is freed to become far more than mere circulation. As described by Atelier 2B:

We propose the typical hard, consolidated core to be replaced with a soft one: an extension of the plinth where the core no longer resists the continuous plane of the city, but rather inhales public activity, bringing a new life to Mies’ dissolved public boundary which before only appeared in plan.

From the exterior, the building’s stacked boxes visually separate the inhabitants: the lower volume houses headquarters for the Chicago Architecture Foundation (CAF) and Council on Tall Buildings and Urban Habitat (CTBUH), the middle houses the Out-of-School-Time Youth Program, and the top is home to the Design and Allied Arts High School. While rigid from the outside, the picture is quite different inside: specifically programmed space is pushed to the sides, thereby establishing an expansive core that is collaborative and soft.

Describing this collaborative core as "the logical extension of Mies’ 'universal space,'" the project holds obvious similarities with two other structures that sought to subvert the legacy of modernism. Both almost thirty years old, Norman Foster’s HSBC Tower in Hong Kong and Richard Rogers' Lloyds of London Building both share the philosophy that pushing building systems away from the core allows for large atria that are flexible and social spaces.

While the two high-tech case studies are likely purer forms of a “universal space," Atelier 2B’s proposal takes greater leeway. Nestled in their “collaborative core” are learning spaces, a gymnasium, performance hall, theater, library and garden. The design seeks to find a balance between sovereignty of the building's occupants and intermixing:

The system of program distribution allows for the autonomy and individual identity of each organization, yet at the same time, instigating encounters and exchange of ideas between users. Furthermore, this also allows for flexibility in building operation, where different sections of the building could be open or closed to the public at different times.

We may never have been modern and may never be, but Modernism’s idealistic failures need not overshadow the practical success of ideas like "universal space." Atelier 2B’s design is a utopian home for architecture’s many faces, one that peppers an altered modernism with the shared and collaborative spaces that define today. Soft in the Middle may be idealistic, but Chicago has a history of flying in the face of convention; for over a century, the city has been a favorable breeding ground for formal experimentation in building, from Mies to Ma Yansong. Atelier 2B’s proposal is an extension of the city’s fabled lineage. 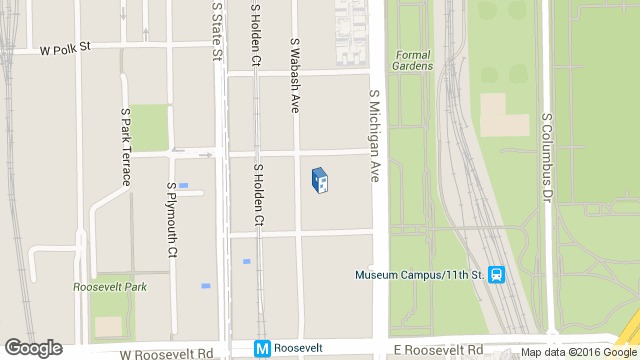 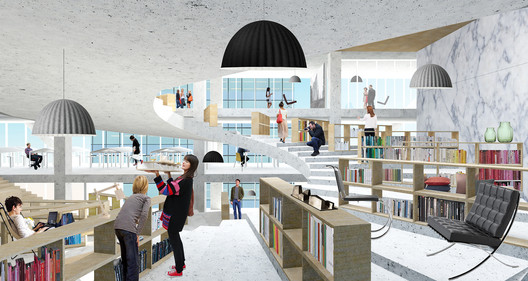