Save
Sustainability on Roosevelt Island: How Morphosis and Arup Are Making Cornell's Bloomberg Center Net Zero
Share
Or
Copy 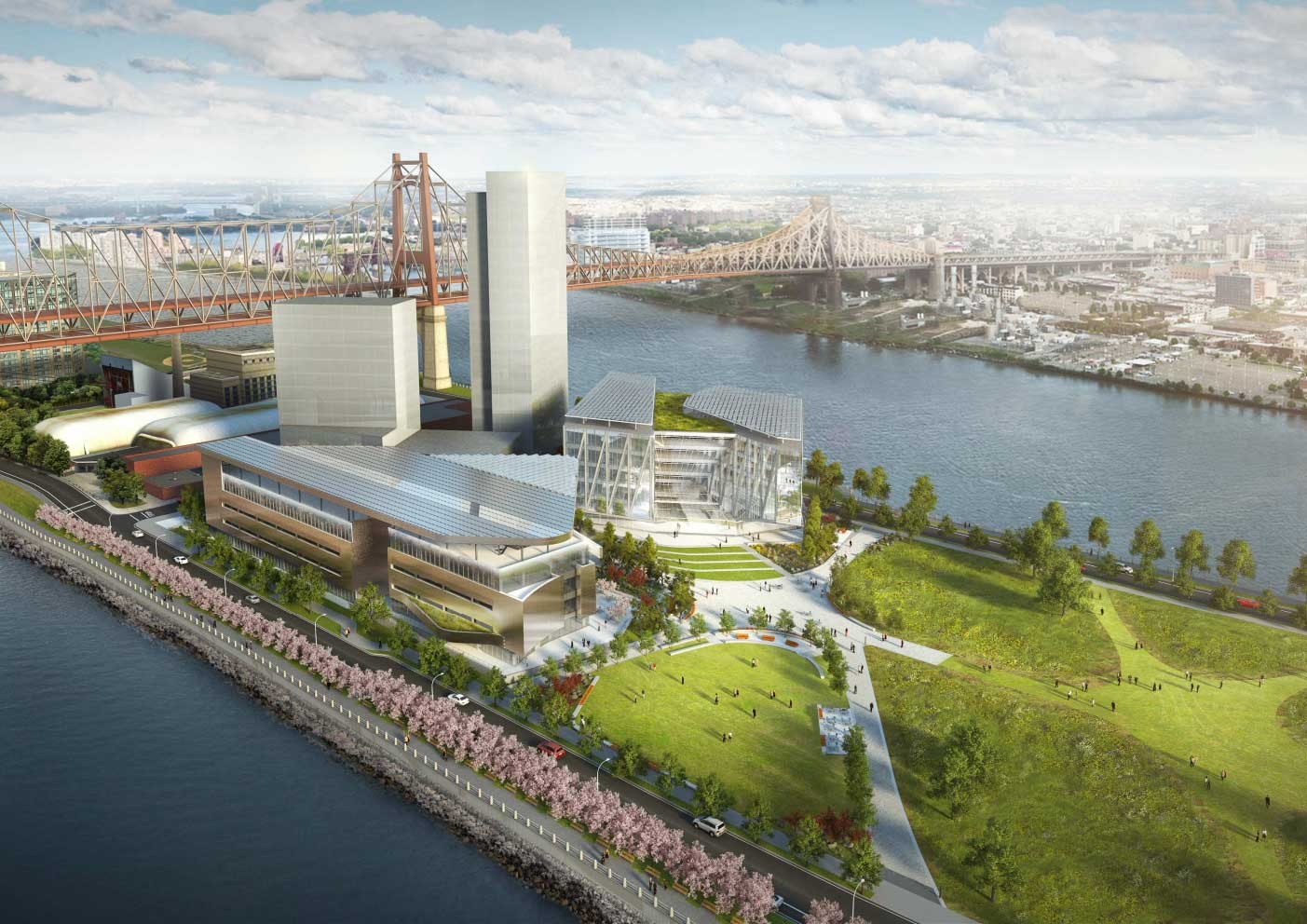 Sarah Wesseler: Why did Cornell choose to aim for net zero for The Bloomberg Center, and what were the design implications of that decision?

Ung Joo Scott Lee: Without getting into the technicalities of the exact definition of net zero energy — is it a measure of embedded energy? how do you calculate it? is it carbon neutral? — it’s a combination of many factors, with the broad goal of creating a healthier environment and a more efficient use of building materials and construction.

That dictated many things beyond just trying to save energy or using a certain type of low-VOC materials. It was a more integrated approach. When you think in those terms, it’s different than just a LEED checklist. A LEED checklist is exactly that — it’s a series of prescribed things that you try to hit to get to a point. Cornell’s intent was to go beyond that and understand a more cohesive approach towards the net zero energy goal.

Tom Rice: It’s a much harder target, and it’s also a particularly hard target in this climate.

Lee: Tom is absolutely right. You think about net zero and many of those buildings are in a field in the middle of Arizona. In the New York City area, with this climate, you need a much different approach.

Fortunately, we initially engaged with Cornell’s engineering group, who had familiarity in thinking outside of the box. As an example, Cornell University in Ithaca uses lake-source cooling for their campus, utilizing Cayuga Lake as heat exchange. So they understood the challenges of working towards a net zero building here in the northeast.

Allegretti: They also recently completed a two-megawatt photovoltaic (PV) array in Ithaca on 11 acres of land. But they have the space for that; they have a much bigger campus than the Roosevelt Island Cornell Tech campus.

Wesseler: What are the most important features of the design from a sustainability standpoint?

Lee: Because the project was so performance driven, we started with some basic questions that we thought needed to be asked to support that energy goal. We tried to make the building explicitly about that in its form and functions.

From the beginning, we knew that we had to tackle the PV surface area issue. PVs are becoming more efficient, but they’re reaching an efficiency plateau, so we have to deal with the horizontal surface. That translated into a building that had a particular form, a certain type of massing. In lieu of having a tower, it required a form factor that is lower and broader. That also allowed us to create a walking building, which reduces the number of elevators, which further reduces energy consumption. It gives the opportunity to lay down a larger field of PV solar panels. It’s all integrated. The PV canopy, in many ways, defines the building identity and the overall masterplan.

Rice: The sustainability discussion is wider than net zero. It’s an overlap between LEED Platinum and net zero, and there are other issues around all of that as well. We’re basically looking for every reasonable measure to achieve sustainability and/or net zero. Energy efficiency, really — net zero is just a term, but we’re really looking to make this a building that meets its purpose, with energy efficiency being one component which is balanced against all other functional requirements.

Allegretti: We have a geothermal field that provides heating and cooling for the building. Cornell University sought partnerships with the US Geological Society to fund three test wells as early analysis for the feasibility of the geothermal loop system.

Lee: Another impactful design feature that is understated but has huge consequences for energy use is the façade. The easiest path to getting a very high-performance building is twofold: first, consume less energy, and second, create a greater exterior insulation line. More than other projects throughout the city, this project has a very highly insulated and detailed exterior wall. We want a building that has a heavy and tight winter jacket. There was a lot of careful detailing, in conjunction with Arup’s façade team, to review thermal bridging and continuous insulation.

Rice: We agreed on some fairly tight limits on the amount of glazing early in the project, and Scott has worked within those. That’s not always an easy thing for an architect to do.

Lee: It’s a fine balance between glazing and daylight. In a more opaque building you have less opportunities for daylighting, and lighting is the biggest energy hog in the building. In a more transparent building, you have more daylighting but greater heat loss. We worked towards achieving a balance.

Allegretti: Right. It’s a 24/7 building basically, and you might have two students on the third floor at two in the morning. How do you address energy-use efficiencies without having the entire system on all the time?

Rice: The glazing thing is interesting as well because the building has fantastic views across the river. You want to benefit from those views, which means you need vast windows. There would be no great benefit in having a really energy-efficient building that doesn’t take advantage of that location. So there’s more glazing in certain areas, partly because of their location.

And another aspect of sustainability is resilience. The whole campus is considering future flood conditions and events like Sandy. Elevations of buildings and other design elements have been set to make the campus less susceptible to any future extreme flooding.

Allegretti: Yes, for the Bloomberg Center we essentially built a bathtub around the building perimeter to mitigate against any water infiltration should flooding occur.

I might mention that what existed on the site previously was an old hospital. It was quite large, like 800,000 square feet.

As a sustainable measure, we took the concrete floors and some walls and are crushing them to build up the substrate of the site. To Tom’s point, we want to create a spine. There’s a natural ridge to the island, and so at the high point we’re going to be building up even slightly higher.

And additionally, we’ll have all the entrances to buildings purposefully set off of what’s called the Tech Walk spine. This way it’s not off of the road system, which is in very close proximity to the East River.

Campus-wide, what’s also important is the rainwater runoff. The rainwater harvesting system is going to be used as a greywater system for the plumbing and toilets in the Bloomberg Center, but the excess water will also be used for irrigation of one of the lawns.

We also have biofiltration swales on site. Rainwater is collected and put through natural boulders and rocks and plantings. It will come out at the other end as clean water discharging into the river.

Wesseler: What has the design process been like for this building? Was the team coordination any different than it would have been for a less ambitious project?

Lee: There were a lot more phone calls than usual! A lot more reviews.

Sometimes when you get into a project, not everyone has the same end goal in mind. The net zero goal was a mission that was well defined that the team understood. It was very intense, with many checks and a lot of balances.

Rice: We had a review of the energy use versus generation at every stage of the design to make sure we were still on track. And as Scott says, it was a collaborative process.

I would add that although the owner is involved in these kinds of discussions on every project, the owner here, i.e., Cornell, really needed to be part of that process for this project, because some of the decisions depended on the way they were planning to operate the building.

A couple of examples: there were discussions on electric plug loads which were based on the type of computers that would be used — desktops or laptops and monitors — and Cornell was willing to sign up to a certain level of use and not beyond that level. Lighting controls as well: Cornell was talking about restrictions on lighting and use of task lighting, and also temperature set points within the building which maybe are a little bit beyond what some owners would be comfortable with.

So it was architect and owner and engineer, all trying to figure this out together.

Allegretti: We even had some faculty and expert input outside of the facilities department. For example, we had some of those folks weigh in on the building control system selection which will control all these smart technologies — the electric plug loads, the lighting and shading controls, and temperature sets. As part of the academic curriculum, the faculty would like to data mine some of this information from the building system and utilize it for research and development, which is quite unique in a university setting.

Cornell has three core educational hubs: built environment, connective media, and healthier life. The institution hopes to create a more efficient, sustainable built environment, and this building is literally its actual lab for it.

Wesseler: How unique is this particular design? Is it similar to other net zero projects around the world, or is it a completely new kind of thing?

Lee: I think it’s a new thing, in the sense that as architects we work with different clients for buildings in different locations and different climates. In every project, there are a million decisions. Our job is to filter through those decisions, prioritize them, and ultimately implement them. So the building is about being energy efficient, but it’s also about urban planning, transportation, visibility, and accessibility, since it is located on an island.

We have discussions about how to get things into the island. What is the size of a façade panel that’s well insulated thermally? How big of a panel can that be? And how are we going to get it where it needs to go?

It’s also a particular academic program, only for graduate students and no undergraduates. It’s an engineering school, geared towards business entry and entrepreneurship. What are the qualities of spaces that you need in order to teach this curriculum?

This is not intended to be the recipe for a net zero building that you can put anywhere. These are integrated decisions implemented for a particular set of conditions.