Maggie's, the UK charity famed for its cancer care centers designed by world-renowned architects, has released a proposal for a new building designed by Heatherwick Studio. The new center is planned to be built on the grounds of the St James' University Hospital in Leeds, and was submitted for planning permission this morning.

The design consists of a series of stepped "planters" which aim to harness the therapeutic effect of plants for the benefit of the center's users. The building's public and private interior spaces are woven both in between these elements, and into the interior space of the planters themselves.

"We’re delighted to be working with Maggie’s to bring a Centre to Yorkshire and to have the opportunity to create a positive environment for users and staff," said Thomas Heatherwick. "The site is a small patch of green surrounded by the huge volumes of the existing hospital buildings. Instead of taking away the open space we wanted to make a whole building out of a garden. The design developed as a collection of large planters defining the building by enclosing a series of shared and private spaces between them."

In addition to the gardens incorporated into Heatherwick Studio's design, the center will provide the setting for the surrounding gardens, which are to be designed by landscape designers Balston Agius. Maggie's Centre Leeds is scheduled to be completed in 2017, when it will join 18 other Maggie's structures across the UK and worldwide. 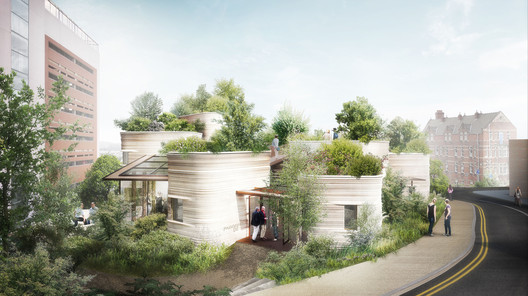