Exhibitions, much like publications and films, are one of the key contemporary methods for the communication of architectural concepts and ideas. They allow the practice, curator or educative body to edit and present information and visuals in a way which narrates a story, provokes new ideas, or feeds into a wider discourse. For many, exhibitions are an invaluable source of inspiration and an engaging way of gaining new, or reaffirming old, knowledge and design precedents. Intimately linked to the space or place in which they are displayed, the best exhibitions also remind us that the practice of architecture is both a profession and a discipline; a valuable way of understanding the built, and unbuilt, world we live in.

If you're traveling to, living or studying in Europe this summer then dive into our compilation of what we consider to be some of the most informative and exciting exhibitions on show in between June and October 2015. If you visit them, or any other exhibitions that you enjoy, share a photograph on Instagram or Twitter with the hashtag #archdailyexhibitions.

Check out our favourite exhibitions on architecture, urbanism and design, from Jyväskylä to Milano, after the break. 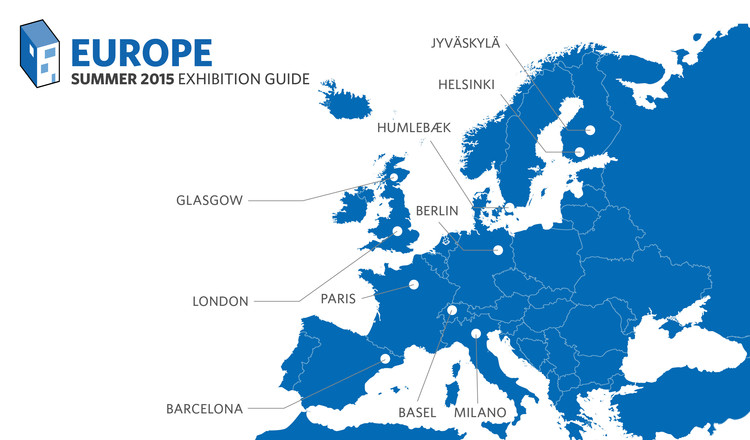 For the first time in the Turner Prize's history an architectural collective has made it to the prestigious shortlist. Some of the nominees for the prize, which is awarded to a British artist under the age of 50 for an outstanding exhibition or other presentation of their work in the preceding year, will be showing their work in Scotland for the first time.

With a comprehensive presentation of architecture projects, contemporary art and cultural history, a story of Africa on the rise is told. The exhibition shows that there are multiple alternative narratives about contemporary culture and history from the African continent’s many regions. These are necessary to refine our image of and view on Africa. They assert that "an architecture exhibition at Louisiana affects the life we live, the life that others live and the life we could live."

This year the RA will welcome Ai Weiwei, the major artist and cultural phenomenon. "His work is visionary, iconoclastic and increasingly political. When he speaks, the world listens." Curated in collaboration with Ai Weiwei from his studio in Beijing, they will present some of his most important works; from the time he returned to China from the US in 1993 right up to present day. Among new works created specifically for our galleries and courtyard, will be a number of large-scale installations.

"The Real vs the Unreal. Are we prepared to apply the advancements in virtual reality to visiting a gallery or buying a piece of art, or is this a step too far?" Here, for only a few weeks, you can don your virtual reality headset to "allow yourself a moment to be captivated by the complexities of the latest Unreal Engine technology in a select group of visualisations and environments from its creators, Epic Games alongside those of AVR London."

The Universal World Expo is now open near Milan. 140 participating countries ware showcasing the best of their technology that offers a concrete answer to a vital need: "being able to guarantee healthy, safe and sufficient food for everyone, while respecting the planet and its equilibrium." A trip to the Expo is also a chance to absorb incredible architectural structures, installations and spaces commissioned by nations to demonstrate the best of what they have to offer.

Drawing upon the Brutalist features of a number of London estates including Churchill Gardens, Pimlico; the Brunel Estate, Paddington and the Brownfield Estate in Poplar, this exhibition investigates childrens' playgrounds which were often made from concrete, cast into sculptural forms, presenting a distinct move away from previous playground design. "They were envisaged as a key aspect of the estate layout and design and as such reflect the preoccupations and social theories of society at that time."

In case you missed it, this exhibition is an adaptation of the first great European retrospective on Tschumi, which was first exhibited last year at the Centre Pompidou in Paris. Here, "numerous drawings, sketches and collages grant a comprehensive overview of his most important buildings and projects. Supplemented by numerous items from the archives and by film documents, the exhibition showcases in equal measure his theoretical and his practical works. It casts light, in particular, on the processes that accompany the transfer of his ideas and concepts into architectonic projects."

"Architecture and urban design from the sixties still set their stamp on the Berlin townscape. Many key planning decisions were made in the sixties and some striking buildings were constructed during that period." This will be the first ever comprehensive overview of this architectural heritage in both East and West Berlin. Historical documents, some familiar and others of more recent origin, illustrate political, social and technical visions for developing a city that had suffered severe destruction in previous decades and was then divided by the Wall.

This exhibition showcases the ideas of some of the finest women practitioners based in, or working in, the UK today. "Each is a role model for their peers and those entering the profession, showing incredible ingenuity and resourcefulness as they tackle societal needs through their designs for urban living." The five exhibitors are Irena Bauman, Alison Brooks, Alessandra Cianchetta, Liza Fior and Katherine Clarke, and Johanna Gibbons.

Through the medium of villas, cottages and summer huts this exhibition takes a look at "a much-loved, traditional Finnish way of spending the summer." For the first time, the exhibition gathers together Aalto’s standard villa types and his one-off summer designs into a single collection exhibited under the same theme, including many which were competition proposals.

11. Cergy-Pontoise: Forms and Fictions of a New City / Paris, France

Five decades after the adoption of the new cities program, the Pavillon de l’Arsenal recounts the history of Cergy-Pontoise - emblematic of this unique urban and human adventure. "How can we build a landscape city in the 20th century? Who are the founding fathers and the pioneers of this planning policy? What transports for the satellite city? What urban strategies shall be adopted to invent a city of 200,000? How can we encourage citizen participation from the start? How do we continue developing urban planning, with the environmental ambitions of today? What are the conurbation’s future challenges?" Through unpublished documents, original plans, period photographs, models, films, an enormous relief map, and great actors’ letters and testimonies, this exhibition seeks to elucidate answers to these questions.

This exhibition presents a critical look at contemporary European architecture projects. "Visitors will find the programme, use and relationship with the environment of the projects; their atmosphere, scale and tectonics; the contextualisation and relations between the works; and the creative processes of their authors." Models, 1:1 scale pieces of buildings, construction materials, interviews, graphics, texts, life-sized photos and videos filmed specifically for the show will be on display.

On show at the MHUBA Oliva Artés Centre in Barcelona before "traveling to Milan, Brussels, Warsaw, Vienna, Leuven, Shanghai, Hong Kong and many other places with the aim of disseminating the quality of contemporary architecture in Europe." Find out more here.