Wang Shu and Lu Wenyu of Amateur Architecture Studio are known for their distinctly contextual attitudes towards design which prize tradition and timelessness above anything else. In many cases, their use of materials is governed by local availability of salvaged building elements. Tiles, in particular, represent a material used repeatedly by Amateur Architecture studio and for Wang Shu, who won the 2012 Pritzker Prize, they offer a political as well as an architectural message.

In a sense, tiles are one of the many ways in which Shu and Wenyu attempt to bring nature and heritage into their designs. Clay tiles in particular are inherently tied to the earth and their local origins, while their history evokes the designs of ancient Chinese structures. By incorporating elements such as salvaged tiles into their architecture, Shu and Wenyu are making a statement against China’s rapid modernization and relatively faceless architectural character. In many ways, the narratives created in their architecture and the particularity of materials used point towards a desire to follow the traditional Chinese concept of uniting humans and nature. [1]

These attitudes towards tradition and nature are reflected in Amateur Architecture studio’s famous phrase, “a house instead of a building.” This quote similarly embodies the importance of the differentiation between architecture as a professional practice and architecture as a craft. To Wenyu, “Making a house means making it for the people, making it more tranquil, or closer to nature, more humanized,” while architecture is understood as an abstract concept that is often separated from its material reality. These attitudes toward the literal aspects of architecture form the basis of why tile is so important to Shu and Wenyu’s material palette. [2]

Wang Shu famously spent eight years (1990-98) in construction in order to detach himself from the traditional practice of architecture. Through these years Wang Shu was able to gain a tactile knowledge of the craft of buildings and came to understand first-hand how designs are assembled. This knowledge is evident in the characteristic details of his architecture, with forms that are made richer through the complex layering of a material as simple as clay tiles. Only by working as a craftsman, however, would Shu understand the infinite possibilities that tiles offer in creating unique works of architecture. [3]

Shu and Wenyu’s use of tile has gained them international recognition, and their Ningbo History Museum is one of the best examples of a structure employing clay tiles in radically different ways. Here the wa pian qiang or clay-tile wall is a key element in the design which successfully anchors the building to its context. Initially used as a vernacular building technique, the actual tiles used in the wall were taken directly from the ruins of the villages that once occupied the site. This not only reflects a desire to reinstate traditional materials in their architecture, but also has the additional benefit of making the structure inherently sustainable for its use of recycled materials.

In other projects, tiles represent an opportunity to create a kind of artificially built landscape. Their Tiled Garden installation for the 2006 Venice Biennale is an extreme example of this very idea, wherein a sea of tens of thousands of recycled tiles from the local area were carefully laid in rows and accessed by pedestrian bamboo bridges. A similar concept is revisited in the Wa Shan Guesthouse and combined with the wa pian qiang wall featuring rows of recycled tiles. Just as in the Tiled Garden, the roof of the Wa Shan Guesthose is made accessible through a series of pedestrian bridges and stairways over the landscape of the roof. Here the undulating peaks and valleys of the tile roof mimic the topography of the surrounding landscape and form a meditative environment on the roof of the primary structure.

Perhaps as a result of their material properties and natural origins, tiles often appear to soften the otherwise regular forms of Shu and Wenyu’s architecture. Through their layering in facades, an intricate density is created which has the effect of drawing one’s attention to minute textures and patterns within the walls. Unlike the solid concrete found in other modernist works, Shu and Wenyu’s tile walls lose their massive and monolithic qualities in favor of a more refined material quality. When layered horizontally as on a tile roof, individual clay tiles create a striking landscape and one that is rarely seen on the ground. By adding pedestrian bridges to the roof of the Wa Shan Guesthouse, Shu and Wenyu force the visitor to experience this affect that may otherwise go unnoticed and draw attention to the tile as a unique material element. In witnessing the intricacy of Amateur Architecture studios works, one can see opportunities for the great care and attention to detail that tile offers architects.

Read our other entries in the Material Masters series here. 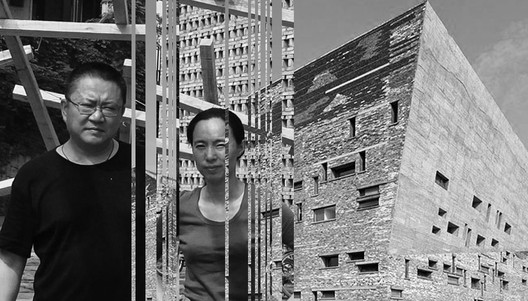