Save
An Interview with Lu Wenyu, Amateur Architecture Studio
Share
Or
Copy

“Every couple of years a new manifesto appears, but how long can it last? We need more people doing instead of talking. [At Amateur Architecture Studio] we spend an enormous amount of time experimenting, trying to resurrect the craftsmanship that is almost lost. We use a method that is passed on, hand-to-hand, to re-establish tradition instead of talking about abstract but empty concepts.”
- Lu Wenyu, Hangzhou, 2013

Pier Alessio Rizzardi: “A house instead of a building” is a really famous phrase of Amateur Architecture Studio. What is the meaning behind this concept?

Lu Wenyu: Once, Wang Shu said: “we only make houses, we don’t make architecture.” The house and architecture here have their own meanings. Making a house means making it for the people, making it more tranquil, or closer to nature, more humanized. Instead, architecture is an abstract concept, so many designs nowadays are actually architecture. So this sentence, from almost 20 years ago, “making houses, not architecture”, is about not making that abstract concept, but to make something really concrete and tangible, something that you can touch or that is made with your own hands… so when you see this house, you feel differently. 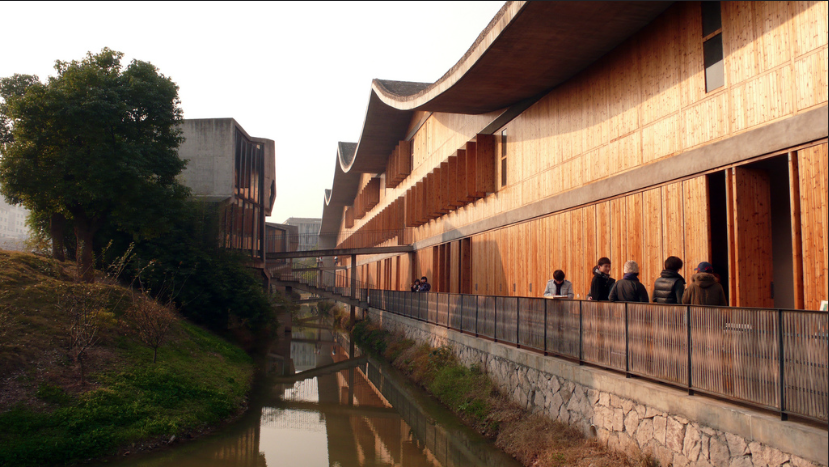 PAR: What would be the relationship between nature and these “houses,” and how does this affect the users?

LWY: This house, that we want to make, should first of all respect nature. The house itself is not the most important; we should first lower our position and respectfully try to be in harmony with nature. As a result, many of our houses are not in their best condition the exact instant after they’re made, but they will grow naturally throughout their lifespan so that many years later, they blend into the environment. It is necessary to experience them on site; it is explained without any words. Just pictures or videos are not able to explain this feeling.

PAR: How does this relate to the traditional relationship between nature and building, and how can it be translated into the new urban environment?

LWY: In fact, our concept today is still a traditional Chinese concept; it is the harmony between human and nature. It’s impossible to go back in time to make ancient houses, because the dimensions have changed, the population has grown, so what we are making now is still new - new houses with much bigger dimensions. When we are making them, we try our best to break down the big volume of many houses in order to achieve a human scale. Our Xiangshan Campus project in Zhuantang, Hangzhou is over 800 hectares, very big; for this reason it is designed with the concept of a city. The first and second stages of construction add up to over 200,000 square meters, so basically it works like a small town.

We made really big houses, but inside this bigness, we also focused on the landscape, we dealt with the landscape and architecture at the same time. In this situation, the relation between each house is defined by a free pattern. This free system is not just about architectural forms, but is a sensitive response to the site and nature.

This whole project is surrounded by mountains and illustrates a natural mountainous shape. The mountain is steep on the north side, so it seems higher; and the south side slopes gently, so we diminished the dimension accordingly. The first stage and the second stage show completely different designs. The first stage is a huge sequence of houses like Siheyuan, which matches the power and grandness of the north side; on the south side, it has the sense of a village. We created a kind of Utopian city here, which is distinguished from the outside world, with a specific architectural design treatment, in relation with nature and the city.

PAR: Your architecture is strongly related to nature and a historical legacy. How do we deal with the missing contexts in contemporary urban China?

LWY: The difference between us and other architects is that we are really prudent in choosing projects; we don’t take every one of them. We choose the ones worthy of putting effort into.

Like our historical museum in Ningbo; by the time we made it, it seemed to be without any context. There was only half of a village left when we first visited the site, but originally there used to be 20. So we chose a method of memory in the design. That’s the reason why people from all around love to go there, to remember now it’s built. Though they see a new house, they find close memories. We also went back to the site and communicated with some elderly people over there; they went there repeatedly because they felt at home. There was an experience of reliving their memories inside. All the huge amount of materials we used were recycled from demolished constructions nearby, it was all different materials from different ages, ranging from over 100 years ago until now. It was brought back here after demolition, which is equivalent to being reborn; this was our consideration about leaving this area with some memories.

Another thing was during the construction all the traditional craftsmen were nowhere to be found. In the past they used to have typhoons tearing down houses, so they rapidly rebuilt the houses without categorizing the materials, thus recycling them again and again. This accumulation of materials led to decades of history in each house. They used to build really low houses, lower than 3 meters. When they rose up, the old techniques became inadequate. So we did a lot of experiments, and found craftsmen to teach them in revitalizing these techniques. In the beginning it was hard; we had to do tons of samples and choose among them, bit by bit. It was extremely difficult; however we found it very interesting and fascinating.

PAR: What should the common values and common goals for architecture and architects in China be?

LWY: It wasn’t until now that this manifesto idea has been proposed. Every couple of years a new manifesto appears, but how long can it last? We need more people doing instead of talking.

We spend an enormous amount of time experimenting, trying to resurrect the craftsmanship that is almost lost. So we are using the ancient techniques that were fading away when they were supposed to be preserved in new architecture, to re-establish this capability. We use a method that is passed on, hand-to-hand, to re-establish tradition instead of talking about an abstract but empty concept.

PAR: What about when we come across the big demand for housing and a short design process?

LWY: For us, we would carefully choose our projects - if we feel that we are not able to finish in such a limited time, we won’t take it. This is about design; about architects, it is a matter of how you decide to proceed. So our decision is not to take such a project, which would never turn out to be good under any circumstances. Usually we just reject it. Even though the amount of time we spend designing compared to the west is still so short, our studio’s control over the whole process is still extremely strict. We spend time controlling the procedure and the result - maybe more than the amount of time we spend designing - to have good results, because it is possible that at any step, they could construct in a different way, which is so normal. And even the quality… If you don’t have really strong control the whole time, it won’t reach your expectations.

LWY: We are basically fighting, which makes it possible to move forward, in the direction that we have imagined, step by step. This is extremely exhausting. You can take care of the design part, but the construction part is completely out of control. A normal studio that takes many projects, all together, wouldn’t be able to spend so much energy on this process; that is the difference between us.

“An Interview with Lu Wenyu, Amateur Architecture Studio” is part of the book: “The Condition of Chinese Architecture” published by Chinese Architectural & Building Press. The research is in collaboration with Venice Biennale Fundamentals, l’ARCA International Magazine,STUDIO Architecture and Urbanism Magazine and patronaged by Polytechnic University of Milan.

Pier Alessio Rizzardi is an architect, researcher and theoretician, founder of TCA Think Tank, an international research group founded in Shanghai in 2011.