Save
Kumbh Mela: A Temporary (But Not Instant) City for 2 Million
Share
Or
Copy

Among the many complex interactions between humans and water in the Ganges river basin, perhaps none is more awe-inspiring than the religious festival of Kumbh Mela, which every twelve years hosts the largest single-purpose gathering of people on the planet, with an estimated 2 million temporary residents and 100 million total visitors in 2013. In the following excerpt from his book "Ganges Water Machine: Designing New India's Ancient River," Anthony Acciavatti recounts the history of this spectacular event, as well as the smaller annual Magh Mela - and explains why even though it is temporary, the huge tent settlement that supports these festivals is not the "instant city" it is often described as, but instead a microcosm of settlement patterns across the whole Ganges.

Dangling at the tip of the Ganga-Jamuna Doab, where the Lower Ganges Canal system terminates, the city of Allahabad overlooks the confluence of the Ganges and Jamuna rivers. While the Jamuna, to the south of the city, runs deep and narrow, the Ganges, to the north and east of the city, runs shallow and wide. Where these two rivers meet (and a third mythical river, the Saraswati), is known as the Triveni or Sangam, the most sacred site within Hinduism.

Every twelfth year, the sleepy university city of Allahabad is transformed into a colossal tent city populated by millions of pilgrims for the Kumbh Mela (literally Pitcher Celebration). And it all seems to happen so fast. After the deluge of the southwest monsoon (June-August), the waters of the Ganges and Jamuna slowly start to recede. A city grid is tattooed into the banks and shoals of the Ganges. Tents and temples pop up in October. Pontoon bridges stretch from one bank of the river to the other and pilgrims begin to arrive in January. Then come reporters and camera crews from all over the world, who come to document the life of what must at first appear to be the world’s largest Instant-Mega-City: a temporary tent city with the major infrastructure of a metropolis.

Yet how can an instant city possibly provide a constant flow of running water and electricity, a coherent layout of avenues and roads defining 14 sectors, 18 pontoon bridges, 38 hospitals, 30 police stations, 30 fire stations and 35,000 toilets? Given the months or years of planning involved to make the Kumbh happen, it is anything but an instant city or a permanent metropolis. It is impossible to standardize the plan of the city as the waters of the Ganges recede differently each year, depositing a different configuration of sandbars and edges. It is a methodically planned ephemeral city. To make this happen, government officials collaborate with public health workers and akharas (religious orders, sects) to organize the physical layout of the temporary city. While at first glance it might have the ephemeral qualities of a pop-up city, its deep structure is that of a carefully planned metropolis in an ephemeral and dynamic landscape. It is ephemeral and dynamic, but it is not instant.

A similar cyclical process takes place every year with the bathing festival Magh Mela at the Sangam, which, like the Kumbh, is held during the month of Magh (January-February). There, too, a gridded city plan is laid out. Plumbing is buried in the sandbars dotting the Ganges. And an electrical grid provides power for millions of pilgrims and news crews. The Kumbh and Magh Melas are so regularly timed that they just seem part of the annual cycle of the Ganges to residents of Allahabad.

While establishing the exact date and traditions of the Kumbh Mela at Allahabad is debatable, the sanctity of the confluence and the occasion of Magh Mela date back well over ten centuries. Hieun Tsiang, a Buddhist monk from China traveling throughout north India during the seventh century CE, witnessed a yearly festival at the sacred confluence. He not only recorded bathing at the Sangam in great numbers and alms giving to Brahmans, but also the Akshyabat tree, noted in the Matsya Purana for its profound sanctity and its timeless state of green. By the late-sixteenth century, the site of the Akshyabat tree was enclosed within Allahabad Fort. A portal with controlled access to the tree and temple was constructed for pilgrims.

Since Hieun Tsiang, numerous travelers visited Allahabad and recorded their experiences of Magh Mela. Touring the British Empire in 1895, Mark Twain visited Allahabad and described the festival: “Two millions of natives arrive at this fair every year. How many start, and die on the road, from age and fatigue and disease and scanty nourishment, and how many die on the return, from the same causes, no one knows; but the tale is great, one may say enormous. Every twelfth year is held to be a year of peculiar grace; a greatly augmented volume of pilgrims results then.” The year of grace Twain described is the modern day Kumbh Mela. By the late-nineteenth century, the Kumbh rotated every three years between Allahabad, Haridwar, Nasik, and Ujain.

A decade after, standing atop the ramparts of Allahabad Fort in 1906, Sidney Low described a sprawling human settlement of two million souls at the Sangam. For Low, “the camp, indeed, should not be called by that name. It is a town—a temporary town, it is true, but while it lasts one of the great cities of the world, more populous than Peking or Vienna.” Describing the avenues and crossroads laid out by the government, Low observed trade and commerce taking place like in any city. His account is similar to many foreign travelers who were amazed and appalled by the deluge of pomp and color of the gleaming palanquins, beggars, sadhus (holy men), bathers, and banners of silk and gold rustling above the crowds. Since the second half of the nineteenth century, the British government, followed by the Government of India, has played a marshal role in the layout and design of the provisional city. In an effort to thwart stampedes and maintain social order, the movement of pilgrims and the spaces designated for their lodging are closely monitored.

But what is more spectacular than the planning for millions of pilgrims, and the reliable delivery of water and electricity—no doubt feats unto themselves—is the inherent ephemeral nature of the Sangam and its place in the larger system of the Ganges once the bathing festivals end in March. After the tents and temples are dismantled and the cameras are gone, the gridded city remains etched into the banks of the Ganges. Footprints of tents endure in the grey silt. Farmers use these residual lines from the once sprawling metropolis to cultivate wheat and rice. Herds of cows and goats graze while water buffalo plunge into the river. The ephemeral metropolis is transformed into an agropolis. This process occurs every year: transitioning from a pastoral landscape to a densely populated tent city to islands of wheat and rice paddies to a monsoonal deluge of gelatinous silt. This process is not instantaneous; it happens in slow motion.

This process of slow motion change that takes place at the Sangam in Allahabad is a microcosm of the changes that take place all along the Ganges. Seasonal farmers throughout the basin divide the silt deposited after the monsoon into fields. They build temporary thatch homes and dig shallow wells to take advantage of the high water table level. Desolate dirt paths that terminate in the river, when connected by pontoon bridges, turn into bustling corridors and marketplaces. Stalls open and children swim in the river and play cricket on the shoals. The entire Ganges corridor is transformed into a continuous quilt of agropoleis.

Such changes are impossible to capture in a single snapshot. They must be measured and drawn in maps that account for dynamic change. What makes the Kumbh Mela so spectacular, besides its density of population and infrastructure, is just how the Sangam offers a dynamic model of urban space in northern India. The choreography of people and water at this site offers a view into a microcosm—an ecosystem—at the scale of a small city. Even though its intensity is definitely unparalleled, the slow motion changes that take place here may proffer insights into how to better integrate change and temporality in the design and life of cities throughout the basin. It offers another way to think about how infrastructure might be used to better organize space and integrate different communities and environmental change.

Portions of this text on the ephemeral nature of the Triveni Sangam were published in “Pop up City,” an Op-Ed by Anthony Acciavatti in The Indian Express (March 11, 2013). 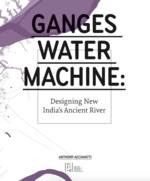