If asked to name buildings by German architect and designer Peter Behrens (14 April 1868 – 27 February 1940), few people would be able to answer with anything other than his AEG Turbine Factory in Berlin. His style was not one that lends itself easily to canonization; indeed, even the Turbine Factory itself is difficult to appreciate without an understanding of its historical context. Despite this, Behrens' achievements are not to be underestimated, and his importance to the development of architecture might best be understood by looking at three young architects who worked in his studio around 1910: Le Corbusier, Mies van der Rohe, and Walter Gropius.

Born in Hamburg, Behrens moved to Munich in 1890 where he began his career as a painter, illustrator and bookbinder. In these years, he was part of Munich's art scene, and generally worked in the popular style of the time, Jugendstil (Art Nouveau). In 1899, Behrens was invited by the Grand-duke Ernst-Ludwig of Hesse to Darmstadt Artists' Colony, where he was offered the opportunity to build his own house.

The resulting building—Behrens' first work of architecture—is indebted to Art Nouveau in some of its features, but it is more remarkable for the way in which it deviates from Art Nouveau norms. Many consider its more austere, stripped-down style to be Behrens' first step away from decorative styles and towards the modernism that he eventually helped to inspire.

In 1907, Behrens teamed with ten other artists and designers and a group of twelve companies to create the Deutscher Werkbund, an organization that was deliberately designed to compete with the English Arts and Crafts movement, and to improve the status of German design and industry. As a result of this organization, Behrens was employed by AEG as an artistic consultant and called upon to design everything from the company's logos and typefaces to its product design, effectively making Behrens the world's first industrial designer.

From this alliance in 1909 came the AEG Turbine Factory. Once again, the design does not entirely eschew traditional architecture, with solid gable ends and corner walls recalling an abstracted classical temple. However, the building's industrial nature required a significantly different approach, in both its spatial and functional requirements, to anything that established architectural styles had to offer. As a result, steel and glass predominate in the building's 123-meter long shell.

From the AEG Turbine Factory, it is not difficult to trace a lineage to Walter Gropius' design for the Fagus Factory four years later, and then onward to the rest of the modern movement. Still relatively young, Behrens went on to teach at the Academy of Fine Arts Vienna and the Prussian Academy of Arts. Though he never replicated the success of some of his protégés, his style also continued to evolve—ironically, 19 years after he created the Deutscher Werkbund to compete with English designers, Behrens designed the "New Ways" house in Northampton, considered by some to be the UK's first Modernist house.

Find out more about the three architects who began their careers working for Behrens here:

Gropius was the founder of the Bauhaus, the German "School of Building" that embraced elements of art, architecture, graphic design, interior design, industrial design, and typography in its design, development and production (learn more in our infographic here). 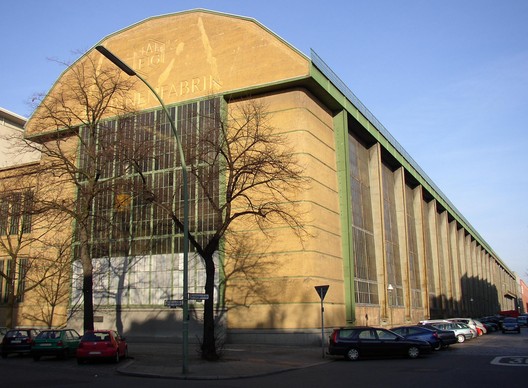