Once again, Chinese company WinSun Decoration Design Engineering Co has expanded the capabilities of 3D printing. After constructing ten houses in under twenty-four hours last year, now they are back with both the world's tallest 3D printed building - a five-story apartment block - and a 1,100 square meter mansion with internal and external decoration to boot.

On display in Suzhou Industrial Park in Jiangsu province, the two buildings represent new frontiers for 3D printed construction, finally demonstrating its potential for creating more traditional building typologies and therefore its suitability for use by mainstream developers. 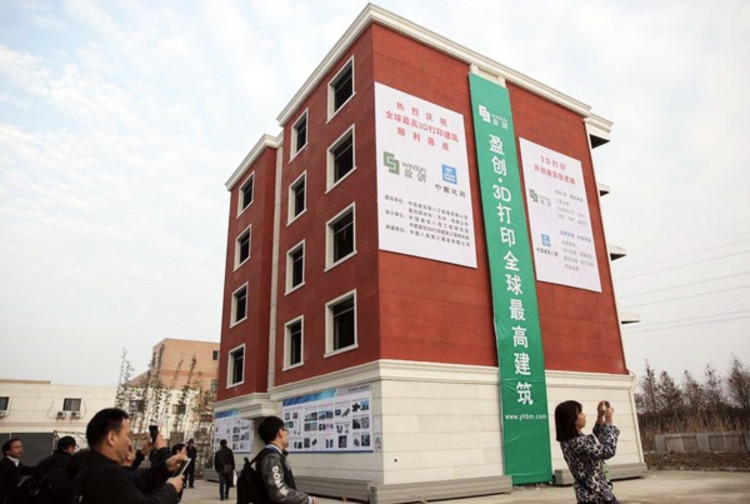 The buildings were created using the same 6.6 by 10 meter tall printer which builds up layers of an "ink" made from a mixture of glass fibre, steel, cement, hardening agents and recycled construction waste. With this technology, WinSun is able to print out large sections of a building, which are then assembled together much like prefabricated concrete designs to create the final building.

In a press conference attended by online 3D printing newspaper 3Ders.org, the Chief engineer of China Construction No.8 Engineering Bureau Ma Rongquan explained: "These two houses are in full compliance with the relevant national standards. It is safe, reliable, and features a good integration of architecture and decoration. But as there is no specific national standard for 3D printing architecture, we need to revise and improve such a standard for the future."

The company also announced a raft of signed contracts and future plans that will expand 3D printed buildings beyond the realm of construction experiments: the $160,000 mansion is the prototype for a set of ten that has been ordered by Taiwanese real estate company Tomson Group; a third house on display at Suzhou Industrial Park was just one of 20,000 ordered by the Egyptian Government; they also announced the creation of Winsun Global, a collaboration with an American firm that will seek to expand into countries around the world with the aim of providing cheap and efficient homes for low-income families, particularly in Africa and the Middle East.