Henry Hobson Richardson (29 September 1838 – 27 April 1886) was known across North America as the father of the Romanesque Revival. Although he only lived to age 47, Richardson is revered across the northeast United States for his appreciation of classic architecture and is the namesake for Richardsonian Romanesque, a movement he pioneered. Richardson studied engineering at Harvard University, a discipline he abandoned in favor of his interest in architecture.

In 1860, Richardson moved to Paris to pursue a degree architecture at the École des Beaux-Arts as universities in the United States did not offer yet offer studies in architecture. By 1862, Richardson had become one of the most qualified and successful architects in the United States, receiving commissions immediately after graduating university. He married Julia Gorham Hayden and established a practice in New York where he remained for eleven years. During his time in New York, he designed many of his famous projects including Boston's Trinity Church, one of the most significant Episcopal Churches in the United States.

Richardsonian Romanesque describes the revival and alteration of Romanesque architecture by Henry Hobson Richardson in the United States. The style is characterized by its fusion of French, Spanish and Italian Romanesque features. Rounded arches atop short, squat columns carved out of varying shades of rusticated stone typify the style, diverging from the less decorated Romanesque style. Richardson's new style surpassed Romanesque in popularity in New England, with most of his buildings still in use today.

Richardson is credited with laying the groundwork for the careers of architects Louis Sullivan and Frank Lloyd Wright who ultimately became his successors. Upon his death in 1886, Richardson was at the peak of his career with significant buildings in progress in Boston, Cincinnati, St. Louis, Pittsburgh, and Chicago. 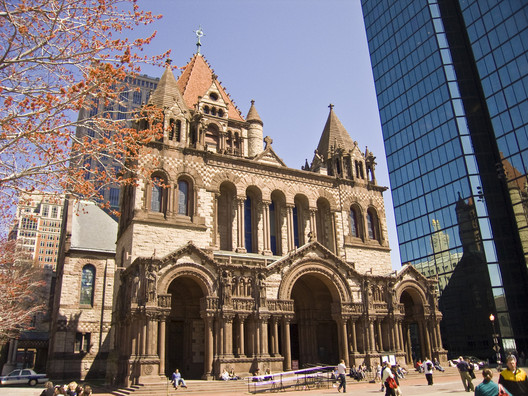