Known as Chicago's "Father of Skyscrapers," Louis Sullivan (September 3, 1856 – April 14, 1924) foreshadowed modernism with his famous phrase "form follows function." Sullivan was an architectural prodigy even as a young man, graduating high school and beginning his studies at MIT when he was just 16. After just a year of study he dropped out of MIT, and by the time he was just 24 he had joined forces with Dankmar Adler as a full partner of Adler and Sullivan.

Sullivan is arguably best known for his influence on the modernists that followed him, including his protegé Frank Lloyd Wright. Though he is known for his beautiful use of ornament, his true innovation came in the way he adapted previous ornamental styles to the newly-emerging tall buildings of the late 19th century, using it to emphasize a building's verticality. It is this principle that led to his famous tenet of "form follows function," although Sullivan himself always credited the inspiration for this phrase to a much older source: Vitruvius.

For these innovations in building tall, Sullivan is often credited as being a part of the first "Chicago School" of architecture, which employed steel framed buildings clad in ornamental masonry. Among the buildings for which Sullivan is known are the Wainwright Building in St Louis, Missouri, the Guaranty Building in Buffalo, New York and the Carson Pirie Scott Building in Chicago.

In this essay, written in March 1896, Louis H. Sullivan (1856-1924) discusses the construction of high-rise office buildings. 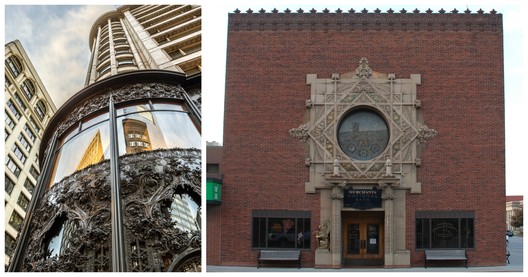