Save
From Derelict Structure to Urban Cinema
Share
Or
Copy

The Cineroleum, a self-initiated project built in 2010 by London based practice Assemble Studio, transformed a derelict petrol station into a "hand-built" cinema on one of capital's busiest roads. Aimed at raising awareness to the wider potential for reusing the 4,000 empty petrol stations across the UK for public use, the adapted structure on Clerkenwell Road was "enclosed by an ornate curtain" strung from the "roof of the petrol station's forecourt. Described as an "improvisation of the decadent interiors that greeted audiences during cinema’s golden age," classic infusions of cinematic iconography were integrated into a space built from only cheap, reclaimed or donated materials. 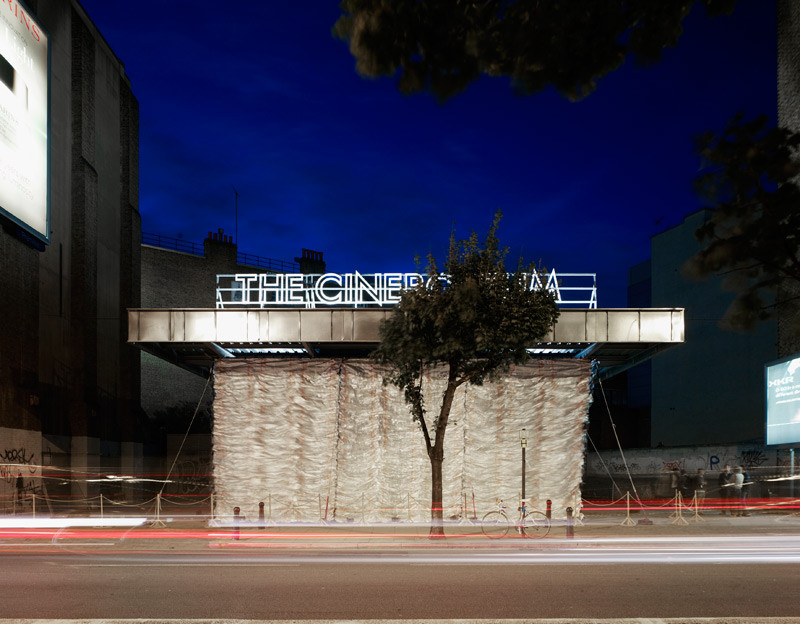 According to the designers, "flip-up seats were remade from scaffolding boards and the curtain out of roofing material." These motifs of old-style picture houses were built by over a hundred volunteers through a process of collective learning and trial and error. Most interestingly for them, it "uncovered the social experience of watching the big screen."

The cinema, separated from the busiest single-lane road in Europe by only the thickness of a curtain, simultaneously contained "a private experience within the auditorium" whilst becoming "a spectacle on the street to passers by." As was noted by the designers, "at the end of the film the curtain would rise, ending the audience’s suspension of disbelief," extending their spatial perception from the "room" into the public realm as the interventional experience amalgamated into the urban fabric of the city.