The American Institute of Architects (AIA) has selected ten recipients for their 2014 Small Projects Awards, which recognizes design excellence in projects with a budget of up to $1.5 million and with a floor area less than 5,000 square feet. The award "strives to raise public awareness of the value and design excellence that architects bring to all project types, including renovations and additions, no matter the limits of size and budget."

This year's awards include 5 houses, 2 pavilions, 2 installations and a cafe. See all 10 awarded projects after the break. 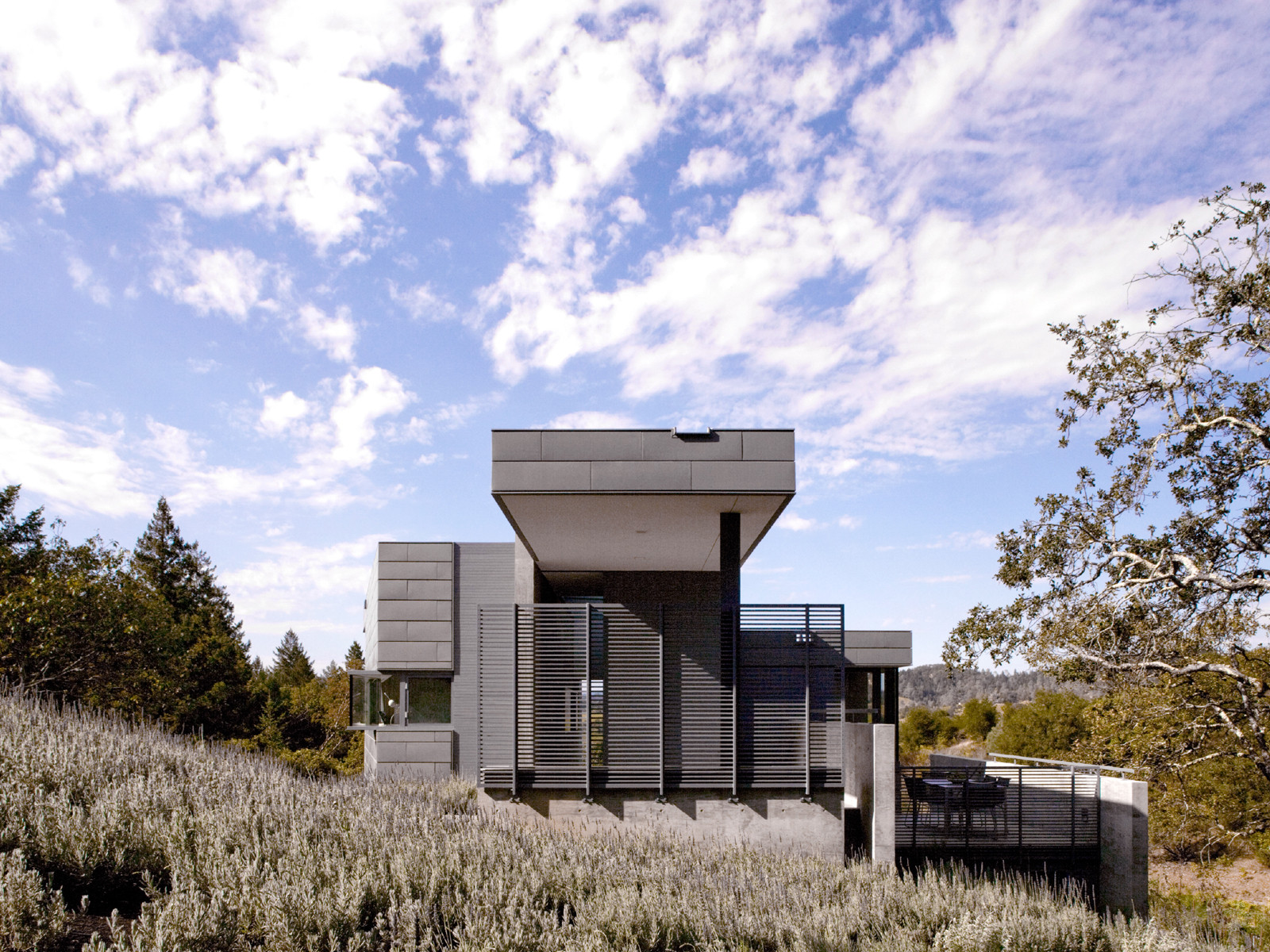 The long, thin volume conforms and deforms to the natural contours of the land and the geometries of the bluff, much like the banana slug native to the region’s seaside forests. In this way, the complex structural system applies and defies natural forms to accommodate the siting. The house is cantilevered 12 feet back from the bluff, both to protect the cliff’s delicate ecosystem and to ensure the structure’s integrity and safety. The interior is a shelter, a refuge in contrast with the roughness and immense scale of the ocean and cliff.

We do not create sculptural form for the sake of it, but instead look to everyday objects. These objects, although simple, can be truly extraordinary when arrayed by the thousands. Paper-covered wire hangers, associated with the clothing and thus the human body, are no exception. When arrayed, the object itself falls away in favor of an ethereal collective whole. Upon closer inspection, however, there remains the mundane everyday structural component of the fashion industry: the wire hanger; even the plainest of objects can be celebrated. The architectural design of the fashion show runway backdrop incorporates rigid and fluid layers, establishing a tension between a grid system and an amorphous organic form.

Like many San Francisco homes, this one poorly integrated its many levels with each other and with its sloping topography and solar orientation. Reversing its reading, we recast the back of the house as its primary façade with a faceted, custom-built glass wall. Divided into three vertical panels that push in and out, this dynamic prism brings animating light and spectacular views to the communal living spaces, now placed at the rear. Bedrooms were flipped to the front.

In our design of the new 'Ground' cafe, in the Marcel Breuer-designed Becton Center at Yale University's School of Engineering and Applied Sciences ('SEAS'), we engaged the unadorned poured-concrete volume of a former seminar room by layering a palette of walnut planks, perforated aluminum, and cleft bluestone over the walls, floor, and ceiling of the space. Our design supports creative collaborations between different constituencies by virtue of a state-of-the-art LED 'digital canvas', nicknamed LuxED, which any member of the Yale community can employ for their scientific or creative work.

Head in the Clouds Pavilion / STUDIOKCA

The Head in the Clouds pavilion is the main gathering space for FIGMENT’s 2013 summer-long exhibition on New York’s Governors Island. Our winning proposal for the City of Dreams Pavilion competition comes out of the desire to create a "place to dream in the city of dreams". Made from 53,780 recycled bottles - the amount, thrown away in NYC in 1 hour - it is a space where visitors can enter into and contemplate the light and color filtering through the "cloud' from the inside, out. A series of "pillows" made from one gallon jugs form the exterior, while 16 and 24 ounce bottles line the interior. Sand, water, and a curved aluminum frame provide structural integrity and create a small seating/dreaming area for 50 people at the base.

The pavilion’s form is more than just visual gymnastics. 252 flexible photovoltaic vinyl tiles sweep the surface of the mesh in order to optimize their exposure to the sun, based on annual sun paths in Italy. Power generated from each cell travels via the mesh and into a battery that charges the vehicle. The collapsable mesh structure suggests a future in which vehicular mobility is no longer dependent on gas or charging stations to refuel but rather from self-generated solar energy.

The Redaction House sits on a narrow sliver of land on a small suburban lake, surrounded by prosaic spec homes crowding the shoreline. The building, a simple wood cube on a stepped brick podium carved into the sloping site, is deliberately introvert, functioning as an optic filter that frames the limited lake vista while strategically editing out views of the built-up context.

At a mere 850-square foot, the house is situated at the top of an olive orchard where breezes and shade are maximized. We also made sure to exploit the open area so that no hardwood trees were removed. The goal was to emphasize outdoor living areas that would be intimate for two people but accommodate larger groups for entertaining. Anchored into the steep hillside with a series of concrete retaining walls and cascading exterior decks, the structure has a much grander presence than one would assume from its size. A site strategy of cascading spaces embracing the slope and relating the inside and outside at every level is an ambitious concept, yet one least intrusive to the natural topography.

As a result of a long-standing relationship with the Museum of the City of New York, the museum asked us to provide a new look for the central entry space of their historic building.  Our proposal included three main elements: a seating area, a temporary café on the 2nd floor and a light installation. Starlight replaces a 19th century chandelier, with the intention of not just providing light, but as part of a greater ideal of making the entry lobby the core experience for public gathering and to encourage visitors to use the monumental circular stair as primary circulation instead of elevators. But beyond these practical notions, the light sculpture symbolizes the museum’s engagement with modern life in the city.

Echoing the dramatic surface deformations that occur when wind blows over the crops and grasses of the surrounding prairie, the building skin, a high-performance ventilated rainscreen system with concrete fiber panels, is organized by 190 individually shaped, black-anodized aluminum fins of interrelated contracting and expanding shapes. Depending on the time of the day and the angle from which they are viewed, the fins create a constantly changing veil whose shifting geometry subverts the volumetric simplicity of the house itself. The house is built around a palette of sustainable and highly durable materials and features an envelope that is designed to endure the continuous onslaught of the Midwest’s severe weather conditions and extreme temperature fluctuations.