Before agriculture, permanent settlements did not and could not exist. Architect Carolyn Steel discusses how food has shaped the cities we live in, urging watchers to realize that our world is made from what we eat. Estimating that the population of cities will double by 2050, she frames food as a powerful tool to positively shape our future urban environments. For more on the dangers of how we currently produce and distribute food, check out Urban Agriculture Part I: What Cuba Can Teach Us - which also features Steel's TED Talk.

2. Alastair Parvin: Architecture for the People by the People

When Alastair Parvin graduated from architecture school a few years ago, many European architects were out of work. He stopped fixating on what he was "supposed" to produce – buildings – and instead, embraced the resourceful and strategic thinking he had learned in school to make himself more useful. Parvin began to ruminate about the people who never could afford architects and how they could benefit from design thinking. Out of this WikiHouse was born – an open source construction system that enables anyone, anywhere to build a house.

Tim Brown calls upon designers to move beyond their professions and "focus less on the object and more on design thinking as an approach." He advocates design thinking as the answer to many of the world's problems, whatever they may be, calling upon watchers to start thinking about those problems and what we can do about them.

Iwan Baan lives out of a suitcase 365 days a year, famously traveling and documenting architecture around the world. In this TED Talk, Baan speaks about his experience behind the lens and specifically, his fascination with what happens after architects and planners come and go from a place. Over and over again, Baan has come across settlements in seemingly uninhabitable places and spaces, made possible by the ingenuity of people with absolutely no design training. To find out how 3,000 Venezuelans made a 45-story, unfinished skyscraper – with no elevator – livable, check out this publication featuring photographs of the vertical dwelling known as Torre David

What makes Le Corbusier's Ronchamp, Tadao Ando's Church of Light, and Peter Zumthor's Therme Vals so special? According to lighting architect Rogier van der Heide, it's how they incorporate both light and dark. Using the history of lighting design and real-world examples to build his argument, van der Heide explains how and why the interplay between dark and light creates interesting environments.

6. Skylar Tibbits: Can We Make Things That Make Themselves?

Can you imagine a world in which buildings are self-assembling, replicating, and repairing? Skylar Tibbits – a trained architect, designer, computer scientist, and teacher at MIT – can. Tibbits focuses specifically on the idea of self-assembly, suggesting the betterment of our current manufacturing capabilities lies in understanding how natural systems work. Using MIT projects he's involved with to illustrate the possibilities, Tibbits invites watchers to see the future through his eyes.

7. Jessica Green: We're Covered in Germs, Let's Design for That

Different programmatic spaces are host to different microbial environments. Some microbes are good for us, while others are bad – so why don’t we start designing for healthy microbial environments? Engineer and biodiversity scientist Jessica Green advocates the possibility, using a case study to demonstrate how our bodies and buildings are constantly in contact with microbes, influencing everything from the freshness of the air to our breath.

"Looking back over a long career, architect Moshe Safdie digs deep into four extraordinary projects to talk about the unique choices he made on each building – choosing where to build, pulling information from the client, and balancing the needs and the vision behind each project. Sketches, plans and models show how these grand public buildings, museums and memorials, slowly take form."

Housing for Health uses the built environment to stop people from getting sick. Architect Paul Pholeros was one of the people involved with the initiative when it was created for a small indigenous community in Australia nearly thirty years ago. The goals outlined at the onset were deceivingly basic – like providing people with the ability to shower every day, something only 35% of people in the community could do at the time. Pholeros talks about the project in detail, as well as the ones that followed and their positive influence.

10. Diébédo Francis Kéré: How to Build with Clay... and Community

"Diébédo Francis Kéré knew exactly what he wanted to do when he got his degree in architecture. He wanted to go home to Gando in Burkina Faso, to help his neighbors reap the benefit of his education. In this charming talk, Kéré shows off some of the beautiful structures he's helped build in his small village in the years since then, including an award-winning primary school made from clay by the entire community."

From Last Year's: "The 10 Most Inspirational TED Talks for Architects."

16. Julian Treasure: Why Architects Need to Use Their Ears

18. Frank Gehry as a Young Rebel 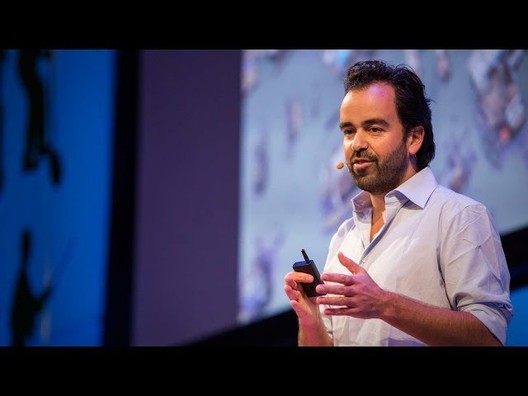