The Munson-Williams-Proctor Arts Institute is a Modern masterpiece and revolutionary precedent of American museum design. Located in Utica, New York, it was the first of many influential cultural facilities designed by Philip Johnson. Also known as the Museum of Art, the structure represents a stylistic turning point in Johnson’s career, marking the end of his loyalty to the International Style and the beginning of his experimentation with Neo-Classicism. 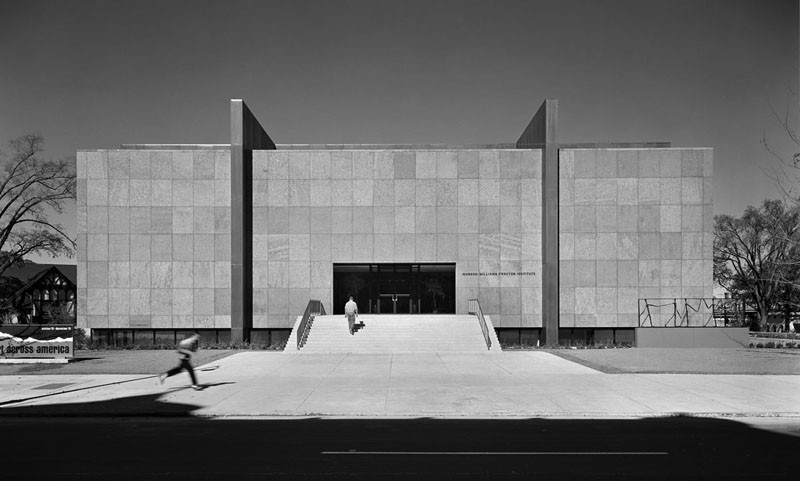 The MWPAI was established in 1919 and housed in several 19th Century Victorian mansions until the Board of Trustees decided in 1957 to commission a new facility on the same property. Under the advisement of notable architectural historian and critic Henry-Russell Hitchcock, the Institute considered several architects: Pietro Belluschi, Paul Rudolph, Eero Saarinen, Edward Durell Stone, and Philip Johnson. Despite the fact that this project would be Johnson’s first opportunity to design a freestanding art museum, his previous experience as the Director of the Department of Architecture and Design at the Museum of Modern Art provided him with valuable insights and sensitivities to the typology.

The new museum program included art galleries and spaces for film screenings, musical performances, art classes, and lectures. Due to the diverse program, Johnson focused his initial design on resolving issues of circulation, lighting, and adaptability. The preliminary design model was displayed in the US Pavilion at the 1958 Brussels World’s Fair, where it received much praise.

The Museum of Art stands as a three-story symmetrical structure, embedded into a site that slopes down towards its rear.  The exterior is visually striking. A monolithic cubic mass wrapped in dark grey Canadian granite floats above a continuous curtain wall.  The unique structural concept—two extruded bronze-clad ferroconcrete pillars attached to each façade—is particularly prominent.  The roof is supported by intersecting girders above, which rest on the pillars below.

The main entry on Genesse Street is approached via a small bridge spanning a dry moat, connecting visitors to the middle level.  The museum layout is arranged around a central, double-height sculpture gallery that receives daylight from deep box skylights above.  Surrounding the open gallery are smaller exhibition spaces of varying shapes and sizes that utilize incandescent lighting. Above, the upper floor is suspended from the roof and wraps around the central court.  Mirrored, cantilevered scissor stairs provide access from below. The basement level mimics the overall spatial layout.  Against the curtain wall, offices surround a central 271-seat auditorium.  The rear of this level meets the sloped grade and offers access to the parking lot.  The interior finishes—travertine floors and dark teak walls—show Johnson’s preference for extravagant, rich materials.

The Museum of Art was completed at a final cost was five million dollars, well above the original one million dollar budget.  Despite its overall reference of the International Style, the MWPAI was primarily inspired by the Berlin Altes Museum, a Neo-Classical work of Karl Friedrich Schinkel that was completed in 1830.   Though separated by 130 years, both structures share common attributes, such as the central and sky-lit sculpture court surrounded by symmetrically-arranged galleries.  Johnson’s admiration for Schinkel became more evident when he gave a lecture in Berlin commemorating Schinkel’s 180th birthday, suggesting that he and other Modernists could learn from his Neo-Classicist designs.1

The renovation of Fountain Elms, a Victorian mansion on the site which used to house the Decorative Arts collection of the MWPAI, occurred simultaneous to the construction of the Museum of Art.  In 1995, the two buildings were connected and in 2010 the project was added to the National Register of Historic Places.

The MWPAI Museum of Art was a particularly meaningful project for Johnson, prompting him to produce a 1960 manifesto on museum design.  His manifesto emphasized characteristics that would later become key elements of his architectural style: aesthetic experience and luxurious use of light and space.  Johnson followed the Museum of Art with similar projects, such as the Amon Carter Museum in 1961 and the Sheldon Memorial Art Gallery in 1963—each design becoming slightly more Neo-Classical in character than its predecessor.  These projects served as the foundation for Johnson’s reputation as an international leader in the design of cultural facilities.

The museum in Utica exemplifies a time when Johnson was fascinated by Ludwig Mies Van Der Rohe. Johnson had previously curated an exhibit of Mies’ work at the Museum of Modern Art and found himself working together with Mies on the Seagram Building at the same time he designed of the Museum of Art. Yet shortly afterwards, Johnson expressed his desire to break free from his dedication to Miesian values. Johnson continued a prolific and eclectic career, and the MWPAI Museum of Art served as an influential exemplar for the future of American museum architecture. 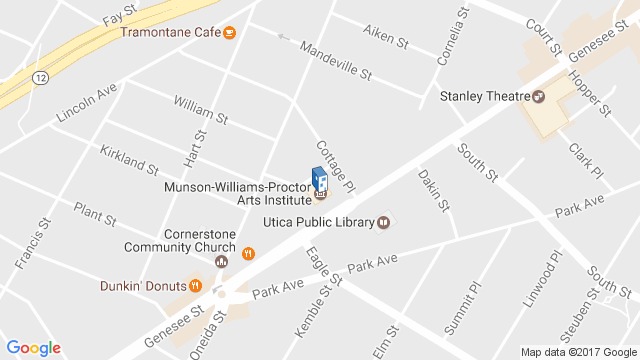 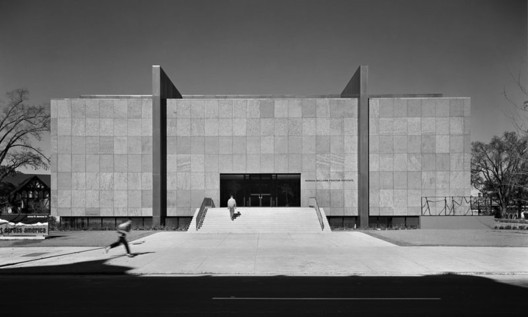