Commissioned by PPG Industries, formerly the Pittsburgh Plate Glass Company, the headquarters occupies a 5.5 acre site in the central business district and was part of an urban revitalization effort after the demise of the steel industry.

PPG Place is a cluster of 6 volumes: a 40 story tower, a 14 story volume, and four 6 story buildings. The composition of lower volumes negotiates the verticality of the main tower and the lower surrounding context, yet all buildings are materially integrated and organized around a central plaza. The buildings house office space, retail shops, restaurants, and a publicly accessible wintergarden.

Philip Johnson, "at once the elder statesman and the enfant terrible of American architecture," (2) was an influential educator, critic and architect throughout the six decades of his career. Frequent trips to Europe to see important artworks during his child established an early appreciation for history, which was particularly influential on his designs around the time of PPG Place. Educated at Harvard in both classics and architecture, he rose to prominence in the architectural world through his position as the first director of The Museum of Modern Art's Department of Architecture and his seminal work The Glass House. A prolific 20th century architect, his career and design approach embodied his chosen philosophical mantra that “the only constant is change.” (3) From a staunch modernist, to a playful postmodern designer, to a deconstructivist form maker, Johnson continually reinvented himself. His professional practice changed as much his stylistic leanings; he entered partnerships with several other architects throughout his career.

Johnson’s partnership with John Burgee led to a dramatic increase in the scale of his projects. Burgee, who was previously a partner in the large Chicago firm C.F. Murphy Associates, acted as the liaison to larger corporate clients. The partnership led to a number of notable tower complexes such as The Crystal Cathedral, Penzoil Place in Houston, and the Puerta de Europa.

These works challenged prevailing thoughts on architecture, rejecting modernism’s emphasis on complete abstraction, the necessity of a social agenda and the focus on economy and function.  To Burgee and Johnson,  architecture was a perceptual experience and could be sculptural as well as referential.

In response to queries regarding the choice of historical references, Johnson replied "It really started with the development of the wall and the articulation of the wall, and I'm not surprised it turned out Gothic. I don't think we sat down to look at Gothic." (4) Overtly Gothic imagery manifests as a crown of spires and pinnacles atop the crenellated curtain wall. While the tower bears a resemblance to Victoria Tower at the House of Parliament in London, the architects cited more local precedents such as the University of Pittsburgh campus and H.H. Richardson’s Romanesque courthouse. While Gothic-inspired skyscrapers such as the Woolworth Building stand as precursors, PPG Place was the first to construct such a building entirely out of glass.

Because PPG Industries manufactures architectural glass, a glazed curtain wall system became a natural choice for the fenestration and the most innovative aspect of the design. Using almost one million square feet of PPG Solarban 550 reflective glass and 175 unique extrusions, Johnson and Burgee explored the phenomenological qualities of glazed facades. Instead of exploiting the inherent translucency of glass, they investigated the sculptural nature of mirrored glass. By repeatedly pleating the each plane, the façade simultaneously reflects ambient light from various angles and dynamically bounces color and image between adjacent facets. Closely spaced piers support bays that alternate between square and diamond shape in plan.

The resultant mercurial surface of alternating dark and light striations is both ethereal and monumental. Silver colored aluminum mullions contrast with the glazing,  giving definition to the articulations akin to a lines of a wireframe drawing. At the base of the building, pointed archways define entrances.

Three types of glass are used on the exterior: double-glazed vision glass with reflective coating at office floors, spandrel glass backed with fiberglass between levels and at mechanical areas, and clear, double-glazed units at the wintergarden and storefronts.  An interior lobby space features red glass wall panels.

Steel columns and reinforced concrete slabs were erected four stories at a time,  with the curtain wall installation following. PPG’s commercial construction group installed the curtain wall. Since the manufacturer, fabricator and installer were the same, quality control was optimized.  Additionally, the reflective and thermal attributes of the glass resulted in a two thirds reduction in energy use from PPG's former headquarters. Both digital modeling and physical mock-ups were used to resolve aesthetic issues and the complex mullion details.

The negative space left by the buildings defines an ample plaza paved with various colors of granite. A pink granite obelisk accentuates the formality of the plaza.  Arcades line the perimeter of the plaza and are home to shops and restaurants.  The wintergarden is located at grade to the west of the main tower.

While these programs were part of the original attempt to enliven the street level, the plaza was criticized for being austere and devoid of life, which in turn hurt the performance of adjacent retail spaces.  A renovation in 2003 by SWA group introduced a skating rink used during the winter and a fountain around the obelisk for warmer months.  Movable furniture and landscape elements add human scale.

For more information, see the official site and view the live webcam of PPG Plaza. 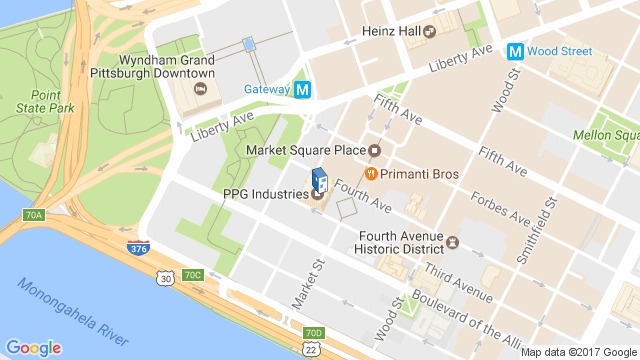