Save
Reconnecting the Subway with the Sky
Share
Or
Copy 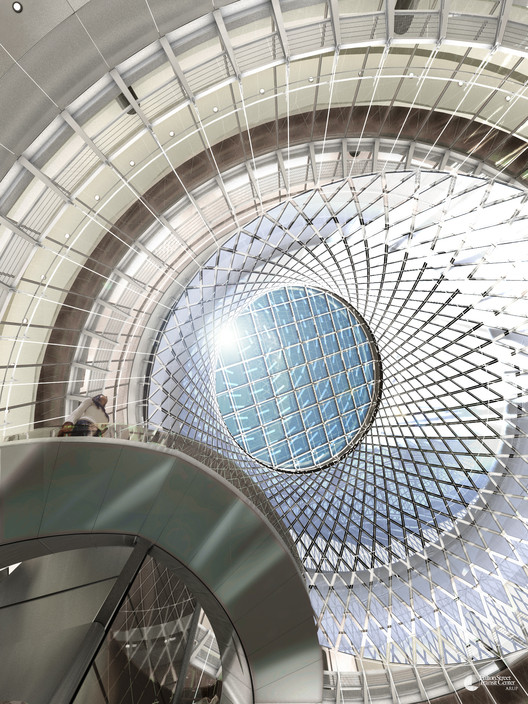 Central to this effort is an entry and retail pavilion containing an eight-story dome capped with a glass oculus. The dome's interior surface is lined with a cable net whose nearly 1,000 anodized aluminum panels redirect sunlight into the subway system below.The cable net and cladding system was based on a concept by James Carpenter Design Associates.

The dome is located within a central atrium space, visible from the exterior of the transit center pavilion.The project is currently under construction.

The net itself is a form-found structure, meaning that it assumes a specific shape as a result of the forces applied to and within it. (Fabric roofs are another example of this type of structure.) Stretching between the oculus ring and the two floors below it, the net terminates one and a half stories above street level.

At the outset of the project, the architect provided guidelines as to what the overall shape should look like and how it should fit in relation to the space as a whole.As a form-found system, the net is designed to move throughout the day. We therefore worked to understand how factors such as air pressures, interior temperatures, and building movements would act upon it in order to predict the extent and range of the motion.

Our mechanical engineers used computational fluid dynamics (CFD) software to trace how air would flow throughout the space under both normal and emergency (i.e., fire) conditions.The CFD analysis for normal conditions showed that large air exhaust ducts would be required in the atrium due to the space’s size. These ducts (the two bright blue dots near the center of either side of the net) were positioned immediately behind the net, meaning that the cable net segments at this position would need to be able to withstand higher-than-normal air speeds.

The emergency conditions analysis showed that air from within the central atrium would pass through the perforated panels during a fire, imposing additional air pressure loads.

Based on these and additional studies, Arup developed 815 unique scenarios based on the possible permutations of air pressure, indoor temperature, and building movement within the Fulton Center dome.Each scenario produced a slightly different cable net shape. The net will assume these shapes over the course of its lifetime as the environmental conditions within the space change.

A flattened view of the structural model provides a clearer view of the strength of the forces acting upon each individual cable segment in one of these scenarios.

Throughout the design process, it was critical to keep in mind that although the net itself is a malleable, form-found structure, the panels themselves are rigid. If subjected to too much stress, they could buckle or break.

We therefore needed to ensure that the connections between the cable net and the panels could accommodate all predicated movements while holding all panels in the correct position so that they would not be strained. We studied panel motion in each of the 815 possible scenarios in order to confirm our design.

Once the form was established, Arup's lighting designers performed a detailed analysis to ascertain the intensity and distribution of light, both electric and natural, that would filter into the transit system below.

We conducted lighting studies from multiple viewpoints to assess the uniformity of the electric lighting on the cable net.

Here, a rendering shows how electric lighting will filter through the cable net into the transit center during periods when there is no sunlight.

Once the design was complete, the construction team provided a mock-up of a small section at the contractor’s Westfield, Massachussetts office in order to confirm the configuration of the net as well as the method of fabrication and assembly. (The general contractor was Plaza Schiavone Joint Venture. Cable net installation was led by Enclos, with fabrication and material provided by Tripyramid Structures.)

The mock-up gave the entire project team an opportunity to examine the behavior of the complex, lightweight system and identify any opportunities to enhance the design in advance of final fabrication and installation. The test showed that the custom-designed connectors provided only the amount of restraint required for each panel, allowing for as much freedom of movement as possible. The mock-up clearly demonstrated the capacity of the cable net system to provide a connection to the sky through the use of natural light.

The Fulton Center will open to the public in summer 2014.

This article comes courtesy of Arup Connect, the online magazine of Arup in the Americas, each week exploring the people and ideas shaping the built environment throughout North and South America.