Save
In Progress: The Biomuseo / Frank Gehry
Share
Or
Copy

The Puente de Vida Museum, more commonly referred to as The Biomuseo, will be Frank Gehry's first design in all of Latin America. It is located in Panama in the area called Amador, which sits only a few blocks from the country's principal cruise port and is adjacent to Panama City. The mission of the Biomuseo is to "offer an impressing and educational experience about the biodiversity and emergence of the isthmus in Panama in order to motivate all Panamanians to get to know and to value this natural component of their identity, as well as to generate in all its visitors the need to protect the environment" (Biomuseo Website). The Biomuseo intends to explore the importance of Panama's biological systems and its emergence as a geological link between North and South America, both of which have had global impacts many are unaware of.

With these goals in mind, it quickly became clear that the museum design needed to be something very special to attract the international attention its founders desired. They wanted the museum to be a never-before-seen kind of design and to serve as a new architectural icon for Panama, much like the Eiffel Tower does for France or the Tower of Pisa for Italy. With the participation of Gehry Partners as well as the world-renowned landscape architect Edwina von Gal & Company, the Biomuseo began to take form: an extremely unique, Gehry-esque structure surrounded by an open botanical park that complements the exhibits within. 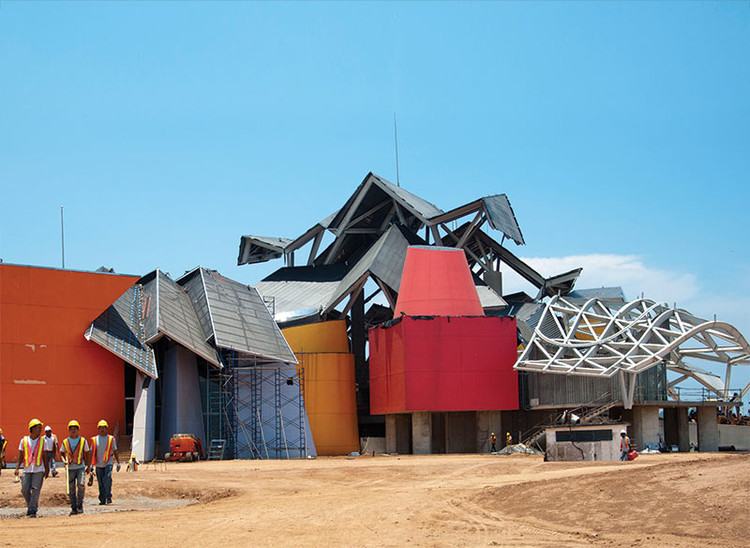 The museum is composed of pavilions that contain interactive exhibits, developed by Bruce Mau Design, on of the most important design companies in the world. These pavilions are covered by brightly colored roofs which will be visible from a great distance by visitors arriving by cruise at the nearby port. Collectively, the roofs create an irregular silhouette that represent the spontaneity of the natural forces that give shape to our world. Darien Montañes, one of the exhibit coordinators at the museum, described it as a "very loud and visible building, appropriate for Panama's loud and visible culture" in this Crane.tv video we featured earlier.

In an interview with The Architects' Newspaper, Anand Devarajan, a partner at Gehry Partners, explained that for each and every project, their firm "delves deeply into the local culture in order to find inspiring and innovative ways to respond to a place" - and in this case, the response was a rich use of color. Although the geometry is characteristic of Frank Gehry, Devarajan goes on to say that exterior finishes - plaster over a concrete substrate - are what is commonly expected in Panama, blending the aesthetics of an internationally celebrated architect with the craft of the local culture. Even the rain screen system developed by Gehry Partners was inspired by the shed-like structures found throughout Panama City, protecting the interior from wind-driven rain while allowing for cross-ventilation.

The greatest challenge, of course, was designing an architectural narrative to explain the natural Panamanian identity. With the help of Bruce Mau Design, the museum developed into a structure with a central atrium, open to the air and accessible, with eight galleries branching off of it. Each gallery has its own architectural identity and embodies its exhibit's contents. Museum director Margot López explained that one of the most interesting and successful things about the Biomuseo is this ongoing conversation between architecture and story and that Gehry has merged them into one. In her words, visitors will be "learning about Panama's geological origins, and the building [will be] taking [them] along for the ride."