Save
Museum of the Moving Image / Leeser Architecture 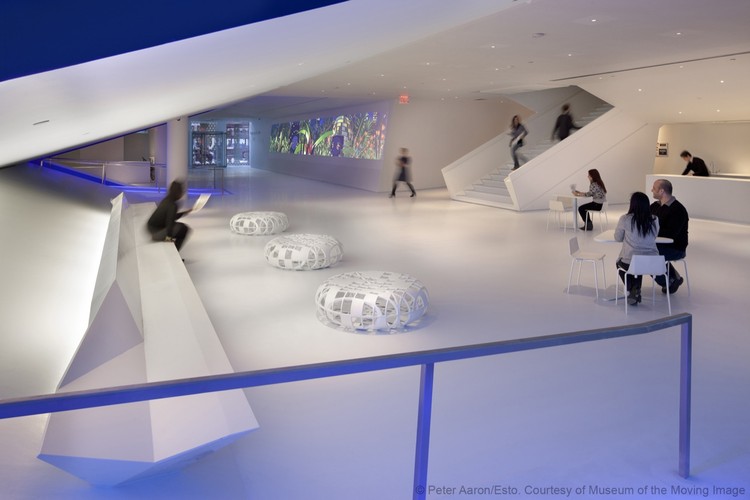 Text description provided by the architects. The Museum of the Moving Image opened its doors this past weekend sharing with the public its expansion and addition of a 264-seat theater, 68-seat screen room, Video Screening Amphitheater and gallery for changing exhibitions.  The complete redesign of the ground floor plus construction of a three-story addition and Courtyard Garden, has doubled the size of the existing building, enabling growth and innovation in the Museum’s uniquely comprehensive presentation of screen culture in all its forms (film, television, and digital media) and welcoming visitors into an experience in which architecture is seamlessly fused with the moving image. Designed by Leeser Architecture, the Museum of the Moving Image is hoping to achieve LEED Silver certification.

A relocated and redesigned entrance on 35 Avenue now presents visitors with a portal of mir- rored and transparent glass with the words “Museum of the Moving Image” in letters three and a half feet tall. With its teasing play of light merging direct vision and reflection within a single plane the entrance is itself the first screen that visitors encounter at the Museum.

As visitors move into the new lobby, across a polyester floor in a cool light blue, they pass along a 50-foot-long wall coated with screen paint, used as the surface for a seamless panorama of projected video, with works selected on a changing basis by the curatorial team. Lending a sense of dynamism to the visitor’s progression through the lobby, the projection wall is canted at an 83-degree angle. Toward the far end of the lobby, a new café is located opposite a gathering space carved out beneath a sloping ceiling, whose angle follows the underside of the main theater.

Visitors may turn to the right from the lobby and step up through either of two tunnels in Yves Klein blue into the new 264-seat theater: a space designed as a capsule for the imaginary voyage of movie going. The ceiling and walls are a woven felt surface of sensuous, vibrant Yves Klein blue, which slips under the stadium-rake seating to give the audience a sensation of floating. This wraparound surface is made of 1,136 triangular panels, fitted together with open joints with the lighting integrated within. Outfitted with an ample screen of classic proportions and projection equipment for formats from 16mm to 70mm and highdefinition digital 3-D, the theater will provide an unsurpassed filmgoing experience. A stage accommodates the Museum’s ongoing series of discussions and other live events, while a miniorchestra pit provides space for musical accompaniment of silent films.

On the left side of the lobby, across from the entrance to the theater, stands the grand staircase. At the first landing, the staircase widens into a 1,700 sqf Video Screening Amphitheater. The seats are an abstract landscape of built-in benches, while the wall above the staircase serves as the screen for changing exhibitions of moving-image works. Passing up the staircase to the second floor, visitors will find a small exhibition gallery, a secondary entrance to the main theater and an entrance to one of the two floors of the 15,000 sqf core exhibition Behind the Screen, which has been completely refurbished with new monitors, computers, interactive software and lighting.

At the top of the grand staircase, the new gallery for changing exhibitions on the third floor provides the Museum with its first completely flexible space for presenting cutting edge new projects. With 4,100 sqf of unencumbered space, the gallery is designed to allow the Museum to present exhibition materials of every variety, from screen culture artifacts to digital media installations.

Incorporated into the Education Center, but regularly used for public programs, is the new 68- seat film and digital Celeste and Armand Bartos Screening Room. Equal in excellence to the 264-seat main theater but presenting a striking design contrast, this secondary screening room has a hot pink entrance and features exposed loudspeakers and a grey, perforated acoustical wall surface, making it more of an exposed machine for the moving image. The space is ideal for more intimate screenings and presentations, as well as classroom and symposium use.

The new Ann and Andrew Tisch Education Center occupies the entire west side of the ground floor in both the addition and the existing building, as well as spaces on the third floor and the lower level. Enabling the Museum to accommodate twice as many school groups as in the past, to serve 60,000 students a year, the Education Center provides a dedicated group entry, the William Fox Amphitheater for student orientation, a flexible Digital Learning Suite with specially designed mobile computer workstations (divisible into two discrete media labs, or able to function as an open auditorium for up to 100 students), and the Nam June Paik Experimental Production Studio where students can record their own hightech video works, finish them in a postproduction bay and distribute them to a world-wide audience via the Internet.

The new on site space for collection storage, located on the third floor, serves an international community of researchers and scholars, offering unprecedented access to much of the Museum’s unparalleled collection of more than 130,000 objects. The Courtyard Garden, 10,370 sqf, incorporates the dedicated entrance for school groups. During summer months, it will provide space for an outdoor café, and a large temporary screen may be installed for open air movie showings.

The new rear façade of the Museum is comprised of a surfacepattern of triangles like those in the main theater, but made in this case out of 1,067 thin aluminum panels, which are mounted on the support structure with open joints, so that every joint is a rain grate. Light blue in color, the panels look razorsharp but create the impression of a super light floating skin dematerialized against the sky: another visual reference in the architecture to the infinite thinness of the moving image. In their pattern, the panels also bring to mind the lines of wireframe computer drawings. Because the triangular panels must fit together precisely to form the skin, the entire rear façade, which is approximately 200 feet long, is built to a tolerance of 3/16 of an inch. 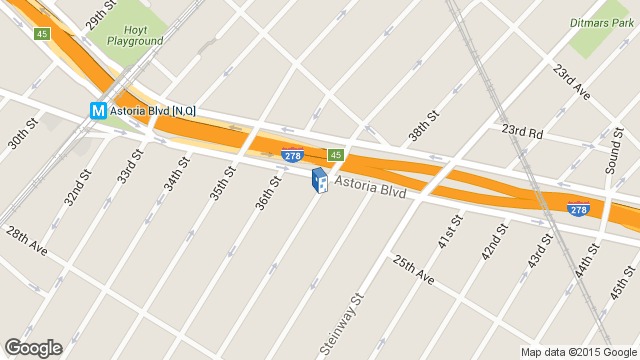 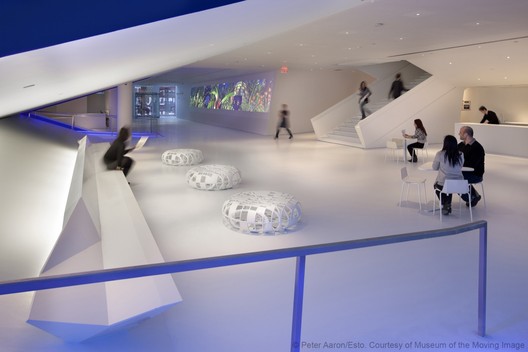