Michigan: The Latest Architecture and News

Twenty postcards depicting Detroit have been selected for “My Detroit,” part of The Architectural Imagination,” the exhibition for the US Pavilion at the 2016 Venice Biennale. Selected from among 463 entries by curator Cynthia Davidson and sociologist Camilo José Vergara, the 20 winning postcards --- taken by 18 different individuals -- were selected as a group, for helping to tell the story of Detroit today. Ten of the 18 winners are Detroit-area residents. 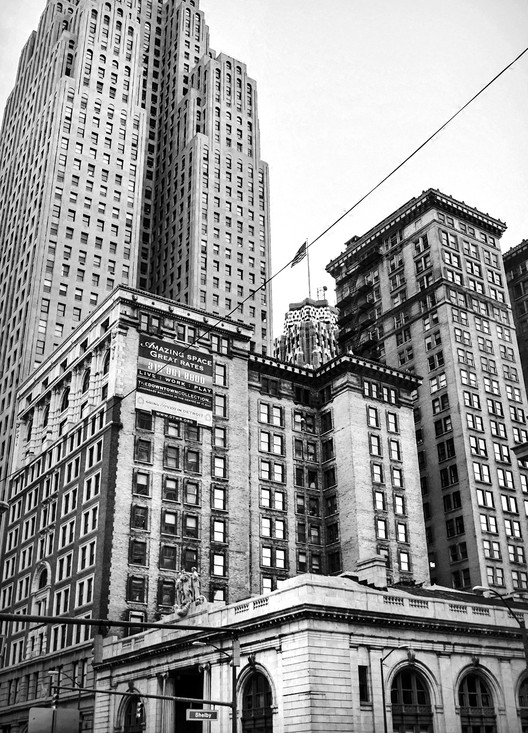 Five US firms - Lorcan O’Herlihy Architects (LOHA), Hamilton Anderson Associates (HAA), Merge Architects, Studio Dwell, and Christian Hurttienne Architects - have been commissioned to design a new walkable community in Detroit's historic Brush Park neighborhood. The project is being referred to as "Detroit's largest residential development in decades." It will include the construction of up to 400 new residential units, ranging in size from apartments to townhomes, and the renovation of four historic mansions, all within a dense four-block community that aims to be a "catalytic" development for the city.

Curatorial Team Selected for US Pavilion at 2016 Venice Biennale

This fall, the teams will travel to Detroit for site visits and community meetings, as well as to meet with faculty and students at the University of Michigan’s Taubman College of Architecture and Urban Planning. Curators Cynthia Davidson and Monica Ponce de Leon hope to have selected a team that produces creative and resourceful work to address the social and environmental issues of the 21st century.

See all of the selected teams after the break.

One of the first and most successful examples of urban renewal, Detroit's 78-acre Lafayette Park is known for being the world's largest collection of works by Mies van der Rohe. Now, the mid-century modern "masterpiece" is the first urban renewal project to be declared a National Historic Landmark. This is partially due to the fact that, as Ruth Mills, architectural historian for Quinn Evans Architects told the Detroit Free Press, "Lafayette Park was one of the few urban renewal projects that's done it successfully." It is now Michigan's 41st landmark.

University of Detroit Mercy's Dichotomy Journal has issued an open call for submissions to its 21st edition on the theme of "Odds," inviting discussion on projects that "defy the status quo and aim for greater fortune." Risk takers rejoice: Dichotomy 21 will shine a spotlight on architectural anomalies and the "implications of defying the odds and embracing the strange." The journal aims to stimulate a new discourse on extraordinary and unconventional designs that push the architectural envelope. Submissions are invited to discuss ideas defying the odds in design, architecture, urbanism and community development.

LSC technology is nothing new, but the transparent aspect is. Previous attempts yielded inefficient results with brightly colored materials, and as researcher Richard Lunt, an assistant professor of chemical engineering and materials science at MSU, puts it, “No one wants to sit behind colored glass.” To learn how Lunt and the rest of the research team achieved transparency, keep reading after the break.

The University of Michigan (UM) has commissioned Preston Scott Cohen and Integrated Design Solutions to design a $28 million expansion for its 40-year-old design building. Primarily planned to be used by the school’s architecture program, the new addition will include classrooms, studios and offices, as well as the renovation of existing studios. The news comes five years after schematic designs for the original expansion were abandoned. More information, here.

From November 22 through March 2, 2014, the Eli and Edythe Broad Art Museum at Michigan State University presents Lebbeus Woods, Architect, bringing together over 100 works from the past 35 years by one of the most influential architects working in the field. Recognized beyond architecture, Lebbeus Woods (1940–2012), who was born in Lansing, Michigan, has been hailed by leading designers, filmmakers, writers, and artists alike as a significant voice in recent decades. Notably, Zaha Hadid, architect of the Broad’s newly inaugurated building, cities Woods as a key influence.

The mission in the proposal, titled ‘The Grand Opening,’ for the Redesigning Detroit: A New Vision for an Iconic Site competition is to create a vision for a 24/7 timeless, vibrant and walk-able urban neighborhood in downtown Detroit with a catalytic impact on the retail activities of Woodward Avenue Corridor. Designed by Chung Whan Park, Terry Park, Jeong Jun Song, Hyuntek Yoon and Kyung Jae Yu, The Grand Opening will connect the different contexts of the existing urban settings and bring every hour of excitement, crowd and memorable identity to the street life of downtown Detroit. More images and architects’ description after the break.

An Opportunity for Revitalization in Detroit

Young entrepreneurs gravitate to places where they can become the founders of a revitalized culture; where land is cheap and available and innovation is uninhibited by a status quo. Detroit, Michigan has become one of those places. The media gives us a portrayal of a wasteland, a post apocalyptic landscape of dilapidated homes and infrastructure. But there is plenty opportunity for start-ups to redefine Detroit's future. That it why young innovators and risk-takers are needed to bring new energy and awaken new markets within the city. A recent article by Chuck Salter for Fast Company identifies six entrepreneurs who have started businesses in Detroit. They vary from grassroots campaigns to inform people of opportunities within the city to small scale enterprises that bring retail and infrastructure to the downtown area and surrounding neighborhoods.

Update: Our friends at Two Islands have launched a Kickstarter campaing so you could also be part of the project. By pledging £5, you can have your own photo used in the ceiling of Mark's House (or £20 for a bigger one). You can send a photo, a sign, a collage or even a QR code, so get creative! Click here for all the information.

Occupying no more than eight parking spaces on Flint, Michigan’s central downtown parking lot, this temporary summer pavilion designed as an abstract, reflective and floating representation of a Michigander, Tudor-style home has been chosen as the winning scheme in the inaugural Flat Lot competition presented by Flint Public Art Project and the Flint Chapter of the American Institute of Architects.

More information on the winning scheme after the break...

Aiming to create a riverfront like none other in the world, landscape architect Matthew Edward Getch and architect Maciej Woroniecki shared with us their proposal in the Detroit by Design 2012 competition where they received the 2nd overall prize and the first prize for the People’s Choice Award. The goals of their proposal were born from Detroit’s apparent weakness. They established linear interventions which recognized the severed parks and green networks and utilized them to reconnect the citizens of Detroit back to the riverfront through pedestrian friendly portals. More images and architects’ description after the break.

Brad Feinknopf, a nationally recognized architectural photographer, kindly shared with us his recent photographic work on Zaha Hadid‘s Eli & Edythe Broad Art Museum at Michigan State University. Known for his traditional, yet cutting edge approach to photography, his quality work here emphasizes the unique exterior and interior spaces of the building created by Hadid’s investigation into the lines of circulation and visual connections. Photographed during the day and night, he also captures its interface between city and campus. Additional images by Feinknopf can be viewed after the break.

Hyuntek Yoon and Soobum You of Team Atelier Why shared with us their first prize winning proposal in the Detroit Riverfront competition. Their ‘Forest’ concept, which aims at being a fairy tale between the city and the forest by ‘filling’, is the focus of the urban development. Currently, the site is filled with voids, such as trees and the knoll, but the forest creates rich stories with the city. Providing spaces that are more secure and for smaller activities, people will have the chance to experience nature. More images and architects’ description after the break.

The main objective for the Detroit River Front proposal is to create a new image of the city, an exclusive and unique landmark that glances to a future Detroit involved in its nature that it forgot for a long time. Designed by Architetto Matteo Ascani (AMA), the project for the redevelopment of Hart Plaza is divided in major guide lines: water, nature, history. They provide a new landscape system, where water enters inside the plaza by canals that redesign the cost line, as the river comes closer to the downtown. More images and architects’ description after the break.

The Dynamism of Zaha's Eli and Edythe Broad Museum

As you approach Zaha Hadid’s new Eli and Edythe Broad Museum in East Lansing, Michigan, it is the complex, light-catching carapace that first reels in the eye — a fine shock after the brick, neo-Gothic buildings that define the rest of the Michigan State University campus. Draw closer and its undulating fins, opening and closing in rhythmic asymmetries, begin to seduce the mind. In some places scrunched up into sharp angles and in others allowed to breathe for longer stretches across the low-slung facade, the fins seem to be the expression of some higher, grid-bending equation.

In a half-conscious attempt to solve the math, you begin to circle the building. At certain points, the fins spread wide enough for generous glimpses inside, but as you move keep moving, the inner secrets vanish again behind the metal lattice. In the same way, the relentlessly kinetic carapace tantalizes with, but ultimately eludes, any logical or definitive summing up. What is certain, though, is that, by the time you’ve come full circle, you’ll have grown quite curious to see what is going on inside.

More after the break…

Studio Gang Architects and Kalamazoo College have announced plans to break ground October 9, at 4PM, on a new campus building to house the Arcus Center for Social Justice Leadership in southwest Michigan. The 10,000 square foot, wood masonry center will be the world’s first purpose-built structure for social justice leadership development, integrating a study, meeting, and event space where students, faculty, visiting scholars, social justice leaders, and members of the public will come together to engage in conversation and activities aimed at creating a more just world.

Set to be completed in Fall 2013, the Arcus Center is targeting LEED Gold certification. Continue after the break to learn more.

General Manifold is an immersive architectural environment installed in the abandoned Federal Screw Works factory complex in Chelsea, Michigan. This installation was the centerpiece of a collective exhibition organized by the architectural collaborative Spatial Ops and students from their Meta Friche research seminar at Taubman College of Architecture and Urban Planning.

Continue after the break for images and the architect’ project description.