Following an international design competition win in 2018, Snøhetta and ECADI have been commissioned to design a new sub-center library in Beijing, offering visitors a contemporary space for learning and sharing knowledge while celebrating the rich cultural China and its capital. The library sets new standards for traditional library designs, featuring technology-driven designs and locally-sourced materials, as well as a glass enclosure of up to 16 meters, which will be China’s first self-supporting glass facade project. 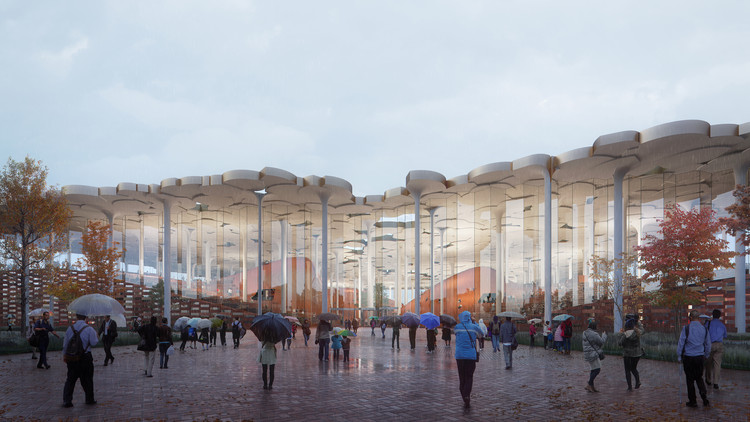 Using openness and inclusion as spatial concepts, the library was designed to ensure learning, information exchange, and open discussions in a space that celebrates the country's rich history of science, art, and performance. These concepts were emphasized by a large common space as the center of the library, highlighted by a grand forest-inspired canopy that covers and permeates throughout the whole library. Because of the transparent building façade, the interactions taking place inside the library are visible to passers-by, inviting them into the amphitheater-like open space.

The project's prominent feature, the ginkgo forest-like canopy, extends from the sculpted reading landscape upwards to support the roof. Under the roof is a stepped landscape area which serves as an informal resting zone, where people can sit down "under a tree" and read. As for the inside of the building, a central valley forms the backbone of the library, serving as the main circulation from the north side to the south side of the building and guiding people towards all relevant spaces on top of and under the reading landscape.

Each tree column is also a building technology component, containing a distributed technology system that controls the interior climate, lighting, acoustic comfort, and rainwater disposal. The roof includes integrated photovoltaic (BIPV) construction elements which use prime sun exposure for renewable energy production, and an overhang to reduce solar gain. The glass has been lowered on the eastern and western walls, and complimented with an active sun-shading device on the southern and western façades. The project used modular components with a rationalized structural grid to reduce the need for customization for both the columns and the roof.

Construction was inaugurated in 2018 and is set to be complete towards the end of 2022. 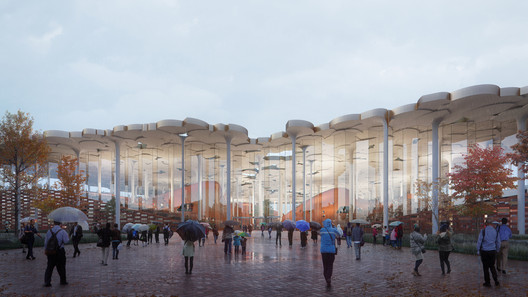