The Tchoban Foundation was initiated in 2009 to celebrate the art of drawing through exhibitions and publications. The Foundation’s Museum for Architectural Drawing was built in Berlin in 2013 around the architect’s life-long passion of drawing architecture. Tchoban’s architecture is guided by urban mise-en-scène settings that he enjoys and captures on paper in his frequent travels. Explaining his preferences Tchoban has a straightforward attitude; he says, “I always ask one simple question—would I want to draw one of my own projects or my colleagues’ projects?” In the following interview conducted over Zoom we discussed drawings that Sergei Tchoban sees as the key tool to understand architecture, his design process achieved through “a thinking hand,” the role of materiality and details, understanding architecture of a city as its historical chronicle and, therefore the need for cities to maintain a strong relationship with both history and modernity.

Vladimir Belogolovsky: I am intrigued by your phrase "My architecture arises from my drawings." Let's talk about your drawings and how they influence your architecture.

Sergei Tchoban: Drawings always serve as a starting point for me to think about a project. I come up with my projects not so much analytically as directly, while drawing. I think with my hand. It is by drawing that I try to understand and feel the logic of the space that can arise in one place or another. This mode of work is intuitive. For some, this approach may not seem conceptual enough. But I came into architecture through drawing and this is how I think. It's natural for me to perceive a city as a play, in which each building plays a role. This raises the following question—is it possible to direct the development of a city? There are cities that grow quite spontaneously, like Shanghai, Hong Kong, New York, or London. Each is like a wild, even if amazingly beautiful forest. These cities have changed beyond recognition in a very short while and turned into picturesque man-made jungles. Are these cities beautiful? Yes, they are beautiful without following any intentional scenario. But I was born in Leningrad [now Saint Petersburg], where city-planning depended on the creation of a series of interrelated mise-en-scenes; that’s how it was from day one. Therefore, I am also interested in compositional ensembles.

For example, a building can be like a diamond in a neckless, i.e. an iconic object surrounded by background buildings. By this analogy, Shanghai consists of diamonds of different sizes, while in Saint Petersburg, as a rule, there is one diamond, around which a worthy neckless is formed. Berlin is similarly planned. In such a city, it is important not to follow regulations too tightly to leave opportunities for emotional outbursts.

VB: Many of these ideas are illustrated by your drawings, which herald similar collisions in various cities. And in this regard, I am interested in the very technique of drawing as a design tool. As you noted, "Drawings are the key to understanding architecture."

ST: This is how I try to understand my own architecture, and the key to understanding any architecture is explored through drawing. That is why I founded the Architectural Drawing Foundation. It seems to me that people will be interested in looking at the drawings to understand how the architects came up with this or that building. The distance from the viewer to the finished building is immeasurably greater than the distance through a thinking hand, so to speak.

VB: Can you say about your Berlin museum that this is a concept building? Can we say that this museum is a drawing that comes alive?

ST: Yes, this building is a journey through drawings. On the one hand, it is a sculptural form. On the other hand, it is a speaking form since the drawings are applied to the surfaces of the facades. This form arose from the process of drawing. And entering the volume of this building and going up the stairs or by elevator, you live through this building, live through the layers of different patterns that form it. Architecture is a captivating journey through the revived world of drawing. Well, this building demonstrates the transition from the brutal form of the architecture of the lower floors to the ephemeral, devoid of visible materiality, upper volume. We rise from heavy, brutal forms and textures to more refined and perfect lines and details. This is how architecture in different times passed from one of these states to another. This change in trends has always existed in architecture, and it is represented in the building itself. And the relationship of the Museum with the surrounding residential buildings of the early 20th century and the proximity to the former brewery of the 19th century create very unusual contrasting composition.

VB: There is a lot of attention devoted to details in your projects. You even noted: "There can be no architecture without details."

ST: That’s correct—details can be scarce or minimalistic, but you cannot avoid thinking about details. Especially if we are not talking about sculptural forms, but about ordinary buildings, where you need to think over everything to the last cornice profile as thoroughly as possible. The simpler the building, the greater the need to accompany it with details. Sculptural buildings are perceived very differently. For example, Zuev Club in Moscow [Ilya Golosov, 1929] is mainly perceived by its form. So, almost random arrangement of some of its windows or the negligence of some details does not harm it at all, because the main thing in this object is its formal innovation, its fundamental novelty. Golosov took a combination of a cylinder and a cube from the 12th century, put them on top of each other, and this produced something completely new. Of course, all buildings should be precise in their details, but this is especially true for ordinary buildings. Therefore, I am fighting very hard for every detail. And there is a lot of resistance from clients and those who would prefer to simplify solutions. Buildings’ surfaces must be precise in detail. Our eye does not forgive inaccuracies.

VB: You said: "The combination of different layers—both historical and modern—is the central theme in architecture today." When did you first notice this? After all, this topic manifested itself quite profoundly relatively recently.

ST: Contrasting combinations of buildings from different eras have always existed. And it would be sad if similar buildings appeared in different times. Then there would be a feeling that our life hasn’t been changing. But this is not so: it is enough to compare the rhythm and way of life of the 19th century to the modern one. I must say that in Leningrad [Saint Petersburg], in the years of my youth, the feeling that life was not changing would come to mind quite often. And only rare inserts, uncompromisingly modernist buildings of the 1970s, clearly demonstrated that each time brings something of its own. But in Berlin, this interconnection of different eras is very clear. Walking through Berlin, you can read the history of the late 19th century, before the war, postwar, and identify the city that emerged after the unification. All this reads very clearly. This is not just a story, but a story of intense clashes, disputes, and it is incredibly interesting. It was in Berlin that I understood architecture of any city as its historical chronicle. And that is so fundamental that in comparison the idea of whether a building is perceived to be beautiful or ugly is of no importance, since ideas about beauty change, and, consequently, the perception of individual buildings also changes.

Another city in which different eras interact vividly is, of course, Moscow: there are churches of the 16th-17th centuries, buildings of all eras and styles are present— classicism, neo-gothic, eclecticism, avant-garde, constructivism, neoclassicism, Soviet modernism, Post-Modernism, contemporary architecture. All this is very valuable. Therefore, it is rational not to demolish buildings, not only from the point of view of saving resources, but also to preserve the historical chronicle of the city. Usefulness and sustainability are very important, but these concepts do not exhaust the meaning of architecture. It is important to understand that the language of architecture is constantly changing, and all variations of this change have the right to exist. It is in the polyphony of the city, in all its incarnations, that its great value lies.

VB: I agree and just want to add that today's architecture shows an incredible degree of tolerance towards earlier layers and, in recent years, such layering can often be found within the same building, which is even more interesting. Take, for example, the reconstruction of Berlin’s Reichstag by Norman Foster. Or, Garage Museum of Contemporary Art by Rem Koolhaas in Moscow. The roots of this phenomenon can be traced back to reconstructions by Carlo Scarpa. However, today this direction has turned into a trend. And if you deal with an existing building on your site, even if it is not valuable, chances are, you will want to preserve it in one way or another.

ST: That’s right. The most important value of any building is that it witnessed its time. Preserving the imprints of time and supplementing them with traces of the present time seems to me very interesting. It is important that the city maintains its relationship with both history and modernity.

VB: It should be added that the value of older structures also lies in the fact that today, either because of the high cost, or because of the loss of technology, we can no longer reproduce it.

ST: Of course. Maybe we can build better, but not the way we could in the past. Techniques change, structures are created differently, the attitudes towards the craft change, the attitude towards working conditions change as well, and so on.

VB: The following words are often used when you describe your work: context, urban mise-en-scènes, beautiful aging, hierarchy of roles, contrasting harmony, harmonization, richness of details, refinement of the surface, and a doorknob. What other words or phrases can describe your buildings or the architecture you are striving to achieve?

ST: The main thing is a conscious attitude toward materiality. It is materiality that effects a building’s volume, surface relief, texture, the ratio of open versus opaque surfaces, and so on. Material is the most important component of a building. It is not always possible to achieve very interesting spaces, since architects are often limited by the most rigid framework, although we must try to overcome them. It happens that even making a double-height space is impossible. But materiality is always with you. Therefore, a caring attitude toward materiality is the most important thing. And all of the above fits into this concept—right down to the doorknob. Architecture is the most material of the arts. It directly depends on the materials used by the architect. Conscious and declared attitude towards materials is the most important thing. In this regard, I would pay special attention to the buildings and details of three architects— Otto Wagner, Louis Kahn and Paul Rudolph. 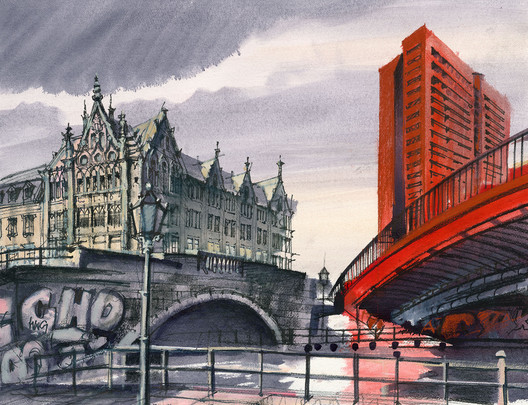