Save
The Evolution of the House Plan in the United States: Post-war Era
Share
Or
Copy

Following the Second World War, United States veterans and citizens were seeking a fresh start, a rightful place to live out their modern American dream. With a significant housing shortage looming around and fast-growing families, solutions had to be found to provide equitable living means for all. The development of new construction techniques and propagation of easy building materials promised an age of prosperity. 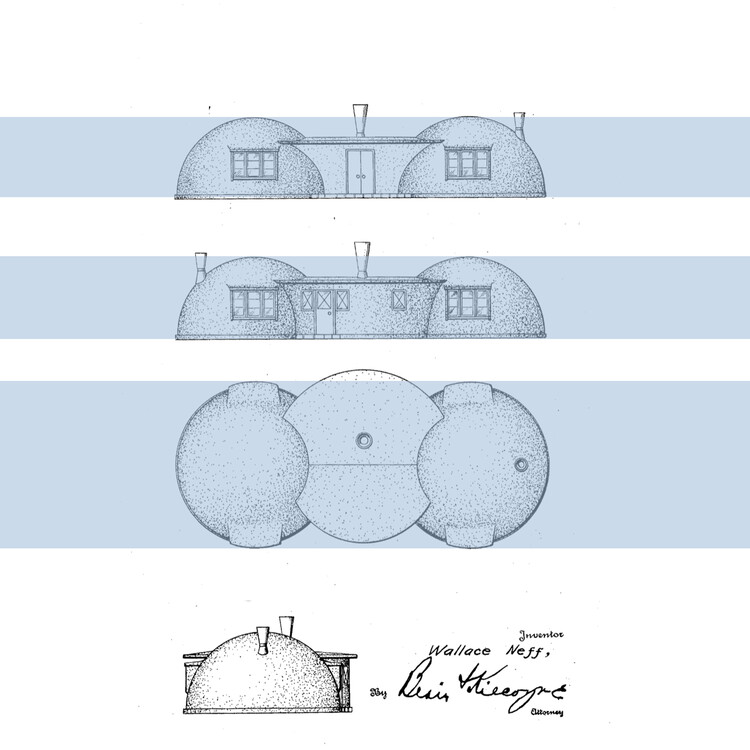 This feature of the Evolution of the House Plan focuses on a few select examples that reconsidered people's way of life through a more utilitarian filter, providing the same basic luxuries and responding to the housing need. While not as directly relevant or similar to today's ideal house plan, the suggested case studies highlight failed attempts at envisioned utopias. Located in the United States, the plans include Wallace Neff's famous bubble houses in Virginia, the typical houses of Levittown, and the Pruitt-Igoe social housing project in St. Louis, Missouri.

Wallace Neff, an architect who up until that point had focused his architectural practice on building houses for celebrities, wanted to come up with a solution that would not only address the tremendous post-war housing shortage but also the world’s constant demand for low-cost housing. He developed a revolutionary system consisting of portable building equipment, no special tools, plentiful materials, modern design, low cost, and rapid construction.

Neff developed Airform construction, a type of pneumatic architecture that used an inflated balloon to give form and structure, and allowed each house to be built in less than 48 hours. This fast pace system enabled the first community of Bubble Houses to be completed in 1942 in Falls Church, Virginia. The project consisted of ten double bubble units and two single bubble houses. It was the first experiment to determine the potential for building more, paid for by the federal government and used to house government workers.

The larger houses were approximately 100 sqm, and the smaller ones were 45 sqm. On the first ones, one bubble acted as a living room while the other one, less than 2m apart, held the rooms. Both bubbles were connected by a flat roof structure, where the kitchen, bathroom, and entryway were located. The ceiling height for each bubble was 3.35m. After that, Neff was hired to build bubble houses in Litchfield, AZ, a linen supply building, and a dormitory at Loyola Marymount University. Bubble Houses were built all around the world: from the Caribbean to Senegal.

According to the comments of former occupants, living in Fall Church's Bubble Houses was extremely isolating. The site was on a very dark road in the middle of the woods, cut off from the rest of the town, so a lot of people ignored its existence. They recognize the stigma about living in Igloo Village, as it was contemptuously called, where all domes looked the same: white paint was mixed with the gunite for the exterior finishes, and window shutters were all painted in the same dark green color.

Apart from this aspect, daily life turned out to be quite problematic for its inhabitants: Round rooms with concave walls were difficult to furnish and it was not possible to hang a picture, damp interiors allowed mold to be formed, and some walls that separated rooms did not go all the way to the ceiling, so privacy was an issue. Eventually, this architecture that looked and functioned exactly the same everywhere, disregarding the context and not varying by region, climate, or even culture, ended up failing. All of Neff’s Bubble Houses in the US were demolished, with the exception of the bubble house where he lived with his brother.

It was in the previously described post-war context, with a serious housing shortage that William J. Levitt (Levitt & Sons) started developing a new project which is nowadays recognized as a prime and almost perfected example of American suburbs and most importantly as the instigator of mass-housing. From 1947 until the late 60s, the company was responsible for eight housing developments around the United States, the first being in New York (1947-1951), then Pennsylvania (1952-1958), New Jersey (1958), Puerto Rico (1963), Maryland (1963 /1964/1970) and Virginia (1968). All of these were known as Levittown(s). The idea was to offer pre-planned, fast-built, housing units at relatively affordable costs.

The first development in New York saw the completion of 17,000 similar-looking housing units only with a few subtle variations of color, roofline, or window treatment. There were only six house models in Levittown, each in a slightly different style depending on the model year. This allowed for a streamlined production process with separated worker tasks, leading Bill Levitt to famously say "We are not builders. We are manufacturers."

While looking at the Levittown plans, one can easily distinguish the familiar traits of what is now referred to as a midcentury-modern house layout that was slightly larger than earlier house plans and suggesting a more comfortable setting. The open plan was adopted, making the most of the limited living area that was oriented to focus on the main fireplace; not an ideal implementation seen as the heating and cooling methods were veering towards the electric. Also in the name of space-saving, the tiny modern kitchens were completely fitted with all built-in appliances and accessories. Just enough picture windows were placed to provide some natural light; well-positioned to maintain a bit of privacy from the neighboring dwelling.

The small pitched roof houses were decorated to hint at the beach-lodge or small ranch style with some use of natural-looking materials such as wood shiplap on the living room walls or ceiling and brick cladding fireplace. Carpet flooring went along the bedrooms, over the radiantly heated cement slabs. Cost-saving considerations also reflected on the finishing with Levitt substituting some conventional quality natural materials with cheaper alternative imported products.

However, all of these considerations did not ensure the promise the project held at providing affordable quality housing for All, most notably due to the blatant racial segregation practiced by the managers of Levittown. In fact, the project was contested for explicitly refusing to sell to certain demographics of different ethnicities. Along with other Levittown regulations that made it harder for inhabitants to have certain flexibilities in the way they led their day-to-day lives; the development became more limiting as the housing model explicitly suggested and influenced the way you had to behave in order to live there. While the models and regulations have changed since then, Levittown houses still reflect the expected post-war conformity through their identical plans.

The myth of guilt in Pruitt Igoe

The Pruitt-Igoe social housing project was originally built for low- and middle-income groups in the United States in the 1950s. It was born as a social tool in the years after World War II. Nonetheless, due to a public decision, it was demolished after 20 years for reasons of vandalism and assault. The article AD Classics: Pruitt-Igoe Housing Project reviews the history of the Minoru Yamasaki Associates project from its inception to the time of its demolition in 1972. A closer look at the project reveals further interpretations about the architectural design, beyond the initial bad press.

Pruitt-Igoe brought together a group of design features championed by modern architects: semi-detached laminar block buildings of various heights; wide access galleries in the apartment blocks that functioned as play areas, porches, laundry drying areas, and nurseries; duplex units with paternoster lifts; and a “river” of free space that winds through the site, a concept proposed by urban planner Harland Bartholomew. The chief architect, Yamasaki believed that a low-density row-house type was closer to a Human space than one that features crowded high-rise buildings. The different floors show the architect's desire to create variety in the blocks thanks to minimal variations in length and height. The basic building combines two units called the "end" and the "rib" (that contains the elevators). The larger buildings have a lengthened distance between the end units due to an added apartment at the center and larger ribs.

Unfortunately, this housing design proposal was not approved by the Public Housing Administration (PHA) due to a limited budget. Hence, some changes occurred such as the reduction of the site area, along with a decrease in blocks construction and the total number of housing units. In addition to that, some of the important services such as bathrooms and play areas located on the ground floors were eliminated. Upon the project's completion, many technical details were missing, including proper landscaping, painting of the concrete walls in the galleries and staircases, insulation of steam pipes, and implementation of mosquito nets on the gallery windows.

As it was already inhabited, the rents of the housing units increased in contradiction to the low-income profile of the project. Maintenance expenses and other public services depended on the complete collection of rent. Yet, neither Pruitt Homes nor Igoe Apartments were operating at full capacity during this period. Consequentially, not enough money was raised to convert them into self-sufficient public housing projects and the units could not receive the necessary services.

The resulting malfunction of the project was popularly attributed to the building's modern architectural design rather than the political and social context or policies. The fairest solution was therefore demolition. "Demolition is assumed as the solution to social problems when in reality it only moves them geographically."¹ There is an urgent need to overcome the criticism attributed to the architectural object —and the blame based on its conception as a product of modern architecture— in order to analyze the context in which it was built, inhabited, and demolished. 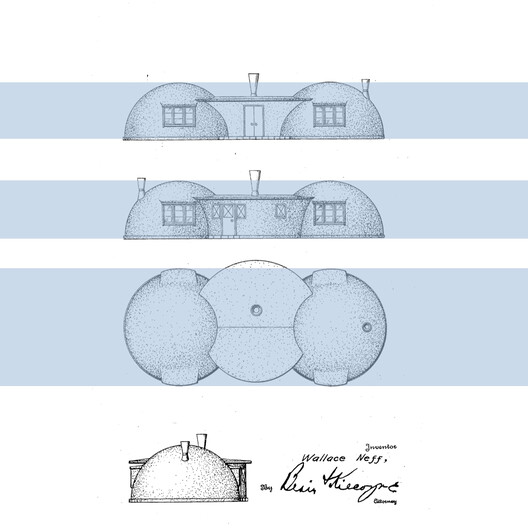