The five-bedroom residence, which has been subject to alterations over the decades and did not enjoy legal protection from demolition or redevelopment, will not only evade the wrecking ball but also be restored by its new, preservation-minded owners. Buyers Safina Uberoi and Lukas Ruecker also own the National Historic Landmark-designated Tonkens House, a rare (and remarkably intact) concrete block Usonian Automatic home designed by Wright in the Cincinnati suburbs. That home was completed 60 years after the Bagley House in 1954.

“We are grateful for all the support and warm welcome we received from the Village of Hinsdale and its Historic Preservation Commission and are excited to take over as stewards from the sellers, who took care of the Bagley House for several decades,” said Uberoi and Ruecker in a celebratory announcement of the home’s sale released by the Conservancy. “Working on the Wright-designed Tonkens House in Cincinnati taught us that a successful restoration is a community effort, and we anticipate working closely with the Village of Hinsdale and the Conservancy over the next few years to do the same here.”

When listed on the private market in July for $1.3 million, the Bagley House was instantly thrust into a troubling state of vulnerability made only more alarming by the fact that tear-downs of historic homes are an all-too-common practice in Hinsdale, much to the dismay of local preservationists. As noted by the Conservancy after the Bagley House hit the market, older homes located on the lots immediately south and north of the property had been previously razed to make for larger, modern replacements and the listing for the Bagley House reportedly made no mention of its connections to Wright or its historic significance. What’s more, in a move that set off alarm bells for preservationists, a pre-plan review demonstrating the lot’s potential for redevelopment was filed with the Village of Hinsdale.

The perceived threat to the Bagley House prompted an urgent campaign led by the Conservancy and the Hinsdale Historic Preservation Commission and Landmarks Illinois to save the home and secure a new, preservation-minded owner. That campaign caught the attention of Uberoi and Ruecker, who decided to step in and put in an offer with a preservation guarantee. That offer was recently accepted by the sellers.

Commissioned by marble exporter Frederick Bagley, the home at 121 South County Line Road in Hinsdale is a markedly revivalist design that stands apart from the more characteristic Prairie- and Usonian-style Wright residences found throughout Chicagoland. Still, it features elements that Wright, who would have been 27 or so at the time of the home’s completion, incorporated into later projects. Chief among them is an octagonal library that extends from the home; Wright’s own Oak Park Studio library, completed in 1898, took a similar form.

As Barbara Gordon, executive director of the Chicago-based Frank Lloyd Wright Building Conservancy, told AN in July, the Bagley House is one of only two Wright-executed works with fully-rendered classical details, the other being the still-standing Blossom House (1893) in Chicago. It is also the only Wright-designed home in Hinsdale.

While we were concerned about the potential risk to the Bagley House, a vital part of Wright’s canon whose loss would have been tragic for the Wright community, we are grateful for the overwhelmingly positive response and support from the Village of Hinsdale, especially its Historic Preservation Commission, and the broader community of Wright lovers in the US and abroad,” elaborated Gordon in the recent press announcement. “We are pleased that, in line with our mission to preserve the remaining built works designed by Frank Lloyd Wright, we were able to help find a preservation-minded buyer in the short time of one week. We look forward to assisting the new owners by making available our expert technical resources and services.”

Uberoi and Ruecker, as mentioned, have indicated that they plan on harnessing the nonprofit’s resources to restore the Bagley House to Wright’s original design while also “considering sensitive ways to add living space.” The progress of the restoration effort will be documented on the Conservancy website. The new owners also intend to work toward securing local landmark status for the home, and, when restoration work is completed, plan to donate a preservation easement to the Conservancy so that it is protected from demolition in perpetuity.

As for Hinsdale, there are hopes that the demolition-dodging outcome in the sale of the Bagley House will help to spur substantive change to protect older homes in a community where a previous effort to enact a temporary moratorium on the demolition of historic homes was squashed by village trustees after facing opposition from the Hinsdale Plan Commission. 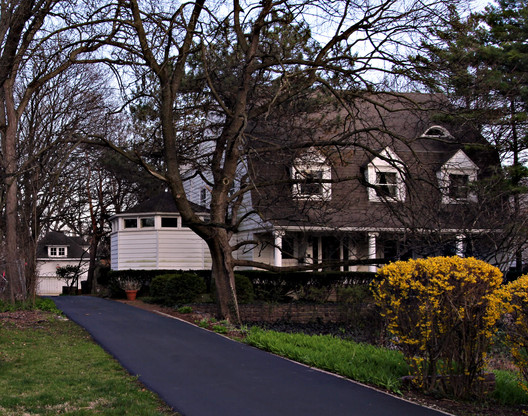