The United Arab Emirates has won the Golden Lion for Best National Participation at the 2021 Venice Biennale, with its contribution entitled Wetland curated by Wael Al Awar and Kenichi Teramoto. Selected by a jury that consists of Kazuyo Sejima (president-Japan), Sandra Barclay (Peru), Lamia Joreige (Lebanon), Lesley Lokko (Ghana-Scotland), and Luca Molinari (Italy), the winning contribution at the 17th Venice Architecture Biennale explores the local geography of the United Arab Emirates to find alternatives to cement, one of the key emitters of the world's carbon dioxide. 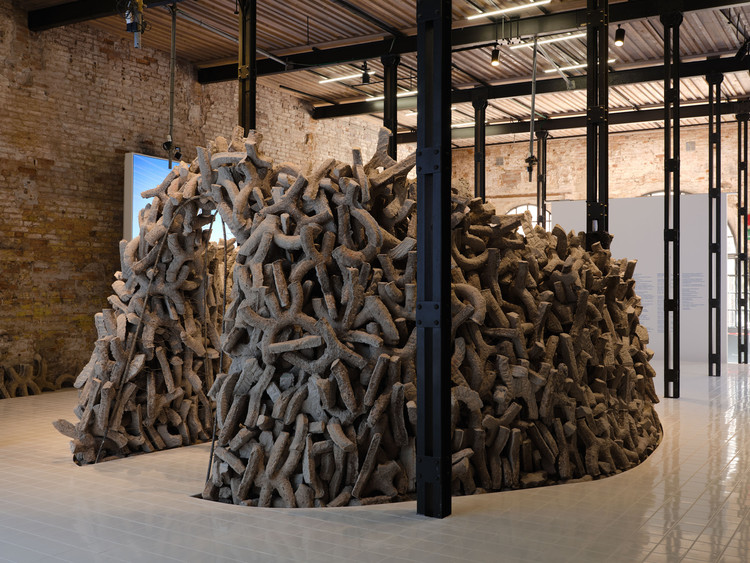 Tackling one of the recurring themes at the Venice Biennale, climate urgency and deterioration of the environment, the Golden Lion Winner of Best National Participation has managed to find a contextual solution by looking into Sabkhas, a sturdy ecosystem of natural salt flats nascent to the United Arab Emirates, to find an alternative renewable resource for construction, one that can replace Portland cement. With a group of scientists in Tokyo, Abu Dhabi, and Sharjah, the team has been working on reproducing the crystallization process of this ecosystem. In Venice, ArchDaily had the opportunity to meet with architect Wael Al Awar, one of the co-curators of the UAE Pavilion, to discuss how the pavilion's innovative material came to be and what it means for the future of architecture. Watch the Interview below.

Curated by Hashim Sarkis, the Biennale Architettura 2021 that continues until 21 November 2021, has also presented the Special Golden Lion for Lifetime Achievement, awarded in Memorium to Lina Bo Bardi to the director of the Instituto Bo Bardi.

Read on to discover more information about the 3 main winners.

Prior to the pandemic, we started looking into sabkhas, a sturdy ecosystem of natural salt flats nascent to the United Arab Emirates. This inspired us to explore a renewable resource for construction, one that can replace Portland cement. The crystallization of salt in the sabkhas offers a blueprint for an alternative to Portland cement, the production of which accounts for 8% of global carbon dioxide emissions. Together with a group of scientists in Tokyo, Abu Dhabi, and Sharjah, we have been working on reproducing the crystallization process of the Sabkha ecosystem. The results of our ongoing quest for a renewable building material is presented at the pavilion.

Silver Lion for a promising young participant in the International Exhibition How will we live together?

Foundation for Achieving Seamless Territory (FAST) (The Netherlands/USA, est.2005) with contributions by Amir Qudaih (Palestinian, b.1993) and the Qudaih family (Palestinians), Yael Berda (Israeli, b.1976), Sandra Kassenaar (Dutch, b.1982), and Malkit Shoshan (Israeli/ Dutch, b.1976)

For nearly a century, fluctuations in the Israeli-Palestinian borders have affected both humans and nature.They have also led to the formation of spaces of exception, and to environments that, at times, seem paradoxically more resilient and sustainable than others. Border Ecologies and the Gaza Strip, traces the transformation of a small farm in Kutzazh, an agricultural village situated along one of the most militarized borders of Gaza and Israel. The installation tells ten stories that highlight daily life in the farm. It links mundane objects, such as watermelons, sardines, sand and sediments, to bureaucratic protocols, Israeli-imposed restrictions, and continued violence, met by collective acts of survival, resistance, mutual aid, and solidarity.

Golden Lion for Best Participant in the International Exhibition How will we live together?

Floating University is a carefully designed place, where human-made architectures intertwine with the habitat of a multitude of other organisms. In a water basin consisting of polluted, urban, surface water, it presents a paradoxical paradise for parallel and common actions—place of ongoing surprises and encounters. The openness of the structures motivates the permeation of ideas and relationships among the different university groups, initiatives, neighbors and other Berlin inhabitants. Haus der Statistik is a German Democratic Republic office complex from the 1960s, now being transformed into a space for art, culture, social, and educational programming, run by a coalition of the civic society. It was the site for “making futures school,” the prototype for a school for spatial practice that acts as an engaged from inside an evolving situation. Looking deeper into collaborative modes of knowledge production and exchange, the architects focused on questions about architecture as a resource and architecture as a collective form. The school itself is conceived as a collaborative testbed with more than 150 participants and 500 visitors. Both projects offer complex forms for supporting emerging communities to co-create future cities. 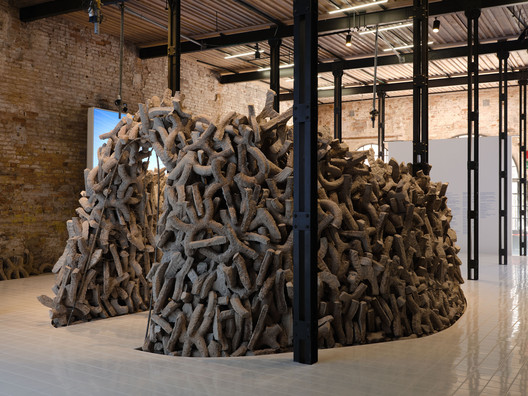