Save
Cafes and Bars in China: Examining the Spatial Routine of Drinking
Share
Or
Copy

Both tea and alcohol in traditional China were similarly aestheticized, and both influenced the language of literature and art. People used to exchange alcohol as a gift in a way that they later would with tea. Today, more and more cities in China have embraced this drinking culture that passed down from generation to generation, and reinterpreted with a new contemporary fashion, which is constantly evolving in the urban cafes and bars.

How does urban context shape the contemporary drinking culture in China? How does drinking as a daily routine fit spatially into the increasingly crowded neighborhood? To provide a focused insight into the design of bars, cafes and tea houses in China, this article will analyze a range of projects located in ten geographically different regions.

Healing Architecture in China: Through a Sensorial and Spatial Experience

From the display partition on the wall, to the movable square box, to the wine rack above the bar, FON STUDIO, in their project 3li Community Café, coherently used a square structure to reduce the complexity of the visual language. The core of the interior layout is naturally the bar operation area. Under the circular structure, the staff can take care of more customers. The seats surround it are designed in different forms to fit in with different scenarios. In an open space, people will have more freedom to enjoy their social life.

Designed by Studio MOR, Paral Bar is located in the lower city of Hangzhou. The architects divided the space into three parallel levels, a gallery at the front, a bar at the back, and a lounge area between the two.

The rest area is set between the gallery and the bar to show the "inbetweenness" in reality and fantasy. The concept of "inbetweenness" expressed through twisted shapes is inspired by Dali's expressive and mysterious surrealist work "The Persistence of Memory ". The art form on the wall comes from the geometric shape of the gallery, but it is distorted to show the difference between reality and illusion; at the same time, it reveals a kind of freedom, just like the freedom in our dreams.

The architecture firm Archseeing recently completed a bistro in a historical neighborhood in the city of Dongguan in Guangdong Province.

The design reuses the original bricks and tiles during the renovation process. To lead a new dynamic experience, a clear context of new materials is applied, connecting the gate, the bar, the stairs, the second-story wall, and the roof. In addition, the main visual aspect of the space is enhanced through local traditional handicrafts, the wangao weaving and dragon boat carvings. In this cafe, where the old and new materials boldly collide, new narratives are born.

To building up a magic lighting atmosphere within a tasting room, the interior design office GE Space Design used warm light setting and the solid wood texture. Bamboo weaving, a local art format in Chengdu, is delicately utilized in the chairs, wall decoration and light box.

Space transition between public bar area and intimate space is naturally achieved through a curved wall, which half surrounds a semi-open room for certain privacy. Elaborate seats setting allows guests to drink and chat with enough space between each table and chair. Non-fixed tables and chairs facilitate the extending of open space for social events.

Qing Studio recently completed a bar project transformed from the original air-raid shelter in the 1st Printing factory in Chongqing.

A 2.5-meter-wide front porch was added to connect the three air-raid shelters, but the plan is more like a series of cubicles connected by a corridor. To eliminate this state, the designers used a semi-circular desk to spatially “bridge” two of the air-raid holes, to make the bar plan become a radioactive space centered on an old stone wall, thus strengthening the overall sensational experience.

dongqi Architects hangs the bar tables over to the ceiling with stainless steel tubes, connecting each other by hinge joints. The vertical steel tubes are connected two by two by hinging with horizontal steel tubes at a 3-meter height above the ground. The horizontal steel tubes, sprayed red and fitted with spot lights, help to integrate and stabilize the whole structure. The shelves are also hung over by steel tubes. The facilities, machines and fridges are all hung to the table top by using L-shaped steel bars.

Everything is hung to the ceiling even including power strips. The exposed pipes, wires and equipments enhance the experience of the “back-stage” concept.

The cafe is located on the first floor. After entering the gate, people can only see the sloping roof. The cafe will be seen only when people passing through the courtyard shaded by the greenery and go down stairs.

Atelier FANZHENG designed a cylindrical space in the middle of the building axis, the lower part forms a circular static pool, and the upper part forms a roof rest platform. People can ramble around the still water pool. The three functional areas of catering, exhibition and roof terrace are connected by the pool, meanwhile they also maintain the independence of each other, forming a rich and interesting activity space.

The Architecture Office DCDSAA Dianchuan recently completed a tea room that sits beside water. Following the principle of the new landmark of local humanities, the historical features and traces of the old buildings have been preserved to the maximum extent.

The material characteristics of tea space are difficult to sustain and rich in poetry. On the wall of the white building, there are modern glass boxes and horizontal note windows, which have a lasting appeal after being transformed.

In Wangchong studio’s project of a tearoom, the architects decided to open a wide, long, tall window on the side wall. The bamboo swayed in the wind behind the window, allowing people to see behind the high wall. The dark sloping hole functions as a "picture frame". Following the slope, the light is projected on the ground of the courtyard.

Through an irregular plan with curved roof, the architecture firm odd makes the higher part of the roof welcome visitor and the lower part become sunshades underneath, helping break boredom in the space. In addition, the 120 mm-high eave with an aluminum roofing system and ultra transparent laminated glass facade creates an image of the lightness of the wind.

The widely cantilevered roof becomes sunshade, which help visitor cool down after playing in the park. Even though the indoor area is 90 m², the full-height and double-side glass facade does not put any stress on those who take a break. 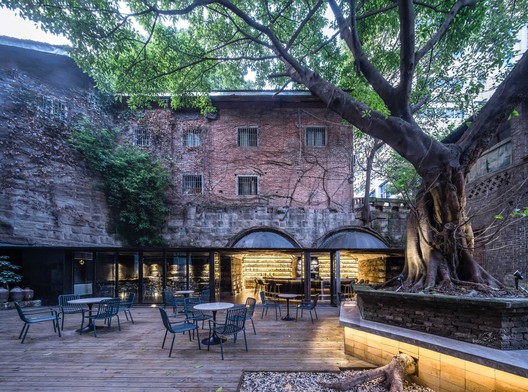