Save
Houses in Guatemala: Shade and Ventilation in Tropical Architecture
Share
Or
Copy

"Here in the tropics, it's the shade not the stove that refreshes and brings people together," says Bruno Stagno about tropical architecture.

Text description provided by the architects. Plan B Guatemala was created in response to the disaster caused by the Volcán de Fuego eruption in June 2018. The ASIAPRODE Association initiated the project to construct 26 homes in order to cover the needs of the affected communities. In an open competition, DEOC Arquitectos came up with a proposal that meets the established requirements, the user’s profile, and the natural context.

The house promotes a rural lifestyle, in touch with the outdoors, where the families can share spaces with the rest of the community, extended family and domestic animals. This is one of the reasons for a design with an open façade aesthetic, which in turn provides a more versatile use of the space. It also allows for the local lifestyle and customs to prevail and be passed down through the next generations.

The construction makes use of long-lasting building materials easy to find and work with, like concrete blocks, bamboo and steel plate roofing. Concrete blocks were used expressly in different dispositions, creating a permeable lattice that protects the inner areas from the outside, allowing for natural ventilation throughout the spaces. Even though this is a replicable housing model, the pop of color inside the concrete block holes allows for a sober yet strong statement for the families to project their personalities, giving the community a stronger sense of belonging.

Text description provided by the architects. La Cabañita, or 'Little Cabin' seeks to integrate into the natural environment of a wooded area on the outskirts of Guatemala City by questioning the idea of the proportion of spaces and trying to erase the edges between interior and exterior in a particular way. The original project was built in 1985, and consisted of a small cabin that had a cantilevered platform of large proportions. The original cabin is built by a triangular metal frame whose joist structure allowed the platform to fly over the slopes of the mountain. The cabin had only a small social area, a kitchen, and in the upper part a small bedroom.

30 years after it was built, the owners requested an extension in order to obtain more formal spaces with proportions according to their contemporary lifestyle. The forest around the original cabin grew, and the vegetation occupied an important space around the whole project. The design strategy consisted in respecting the original cabin, since the sense of space, risk and permanence of its architectural configuration was valued. In view of the need for a social area and a single bedroom, two independent modules were generated on each side of the original cabin.

An interstice was left between each of them, and the position in the floor was adjusted to the topography of the land, therefore, the 3 modules are not completely parallel to each other. The way to unify them was done through a totally transparent corridor in their two faces, to emphasize the union that exists with the forest, and to be able to contemplate the architecture of each one of the modules of different points of view during the circulation routes of home. The roofs of the two new modules were made using the same angle as the original cabin, but in the opposite direction, respecting the angle of the original cabin in one direction, and the two modules obtaining a new identity inspired by the pre-existing architectural object.

The glass corridor that unifies the different modules is covered by a thin slab of concrete to emphasize the lightness of the glass corridor and to give importance to the three habitable modules. The project was built using metal, wood and glass, and the new modules, like the original cabin, have an external platform that exceeds the internal dimensions in order to pay tribute to the environment and encourage its inhabitants to carry out their main activities in the external area of the house. The platforms are linked to each other on the outside, so that the whole project can be traversed in a cyclical way, entering and leaving from different points and allowing the inhabitants to flow into the space in a spontaneous way.

Text description provided by the architects. Guatemala is known for its culture, its great weather and its incredible landscapes. The four homes that comprise the Guatemala Beach House project are located on the site of a 1950’s beachside development on the Pacific coast of the country an area that has gone through many changes over the years as the beach has slowly expanded outwards to the sea.

In the words of architect Christian Ochaita, one of the designers of the project, “We began with the idea of making homes that would be an escape for residents whose primary homes are in the country’s busy and polluted capital, so a primary goal was to make these homes as un-urban as possible.” The project brief was to design a cluster of homes for a large extended family that enjoys spending time with one another and also appreciates each individual family’s independence. “Our solution was to design one home and then to make four variations on that home based on the distinct needs of each family,” explained designer Roberto Galvez, who is the other half of firms lead architects.

Each home has a small interior area and an expansive outdoor area facing the beach. And each has between three and five rooms, depending on the owner’s needs. At its core, the compound has a social area with a kitchen, decks, bars and a pool. Passive climate solutions are used throughout, and are augmented as needed to ensure the year-round comfort and convenience for the residents.

All the homes and social areas are elevated from the ground by between three and six feet to separate them from the hot sand. The homes are made up of two forms (front and back) to benefit from gentle crosswinds and to allow for a green space between the homes. A double roof eliminates the need for air conditioning in all but the few hottest days of the year. 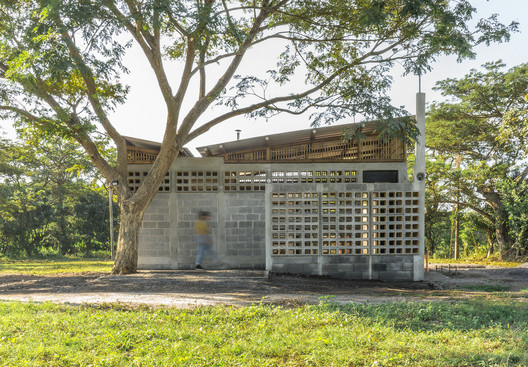