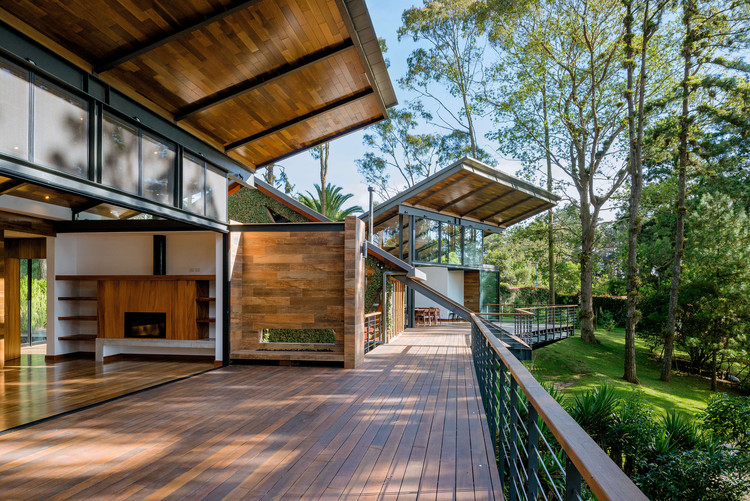 Text description provided by the architects. La Cabañita seeks to integrate into the natural environment of a wooded area on the outskirts of Guatemala City by questioning the idea of the proportion of spaces and trying to erase the edges between interior and exterior in a particular way. The original project was built in 1985, and consisted of a small cabin that had a cantilevered platform of large proportions. The original cabin is built by a triangular metal frame whose joist structure allowed the platform to fly over the slopes of the mountain. The cabin had only a small social area, a kitchen, and in the upper part a small bedroom.

30 years after it was built, the owners requested an extension in order to obtain more formal spaces with proportions according to their contemporary lifestyle. The forest around the original cabin grew, and the vegetation occupied an important space around the whole project. The design strategy consisted in respecting the original cabin, since the sense of space, risk and permanence of its architectural configuration was valued. In view of the need for a social area and a single bedroom, two independent modules were generated on each side of the original cabin.

An interstice was left between each of them, and the position in the floor was adjusted to the topography of the land, therefore, the 3 modules are not completely parallel to each other. The way to unify them was done through a totally transparent corridor in their two faces, to emphasize the union that exists with the forest, and to be able to contemplate the architecture of each one of the modules of different points of view during the circulation routes of home. The roofs of the two new modules were made using the same angle as the original cabin, but in the opposite direction, respecting the angle of the original cabin in one direction, and the two modules obtaining a new identity inspired by the pre-existing architectural object.

The glass corridor that unifies the different modules is covered by a thin slab of concrete to emphasize the lightness of the glass corridor and to give importance to the three habitable modules. The project was built using metal, wood and glass, and the new modules, like the original cabin, have an external platform that exceeds the internal dimensions in order to pay tribute to the environment and encourage its inhabitants to carry out their main activities in the external area of the house. The platforms are linked to each other on the outside, so that the whole project can be traversed in a cyclical way, entering and leaving from different points and allowing the inhabitants to flow into the space in a spontaneous way.