Save
Building on the Past: Get to Know The Work of Carl Gerges Architects
Share
Or
Copy

Last year, Archdaily inaugurated its first edition of Young Practices, an initiative meant to highlight emerging offices that pursue architectural innovation. Carl Gerges Architects is a Lebanese practice whose body of work is a careful consideration of culture, context, and heritage. Villa Nadia and Batroun Boutique Hotel are two of the studio’s unbuilt projects that showcase the assemblage of architectural tradition and contemporary design, informed by a poetic sensibility and a deep understating of the local social, environmental and historical landscape. 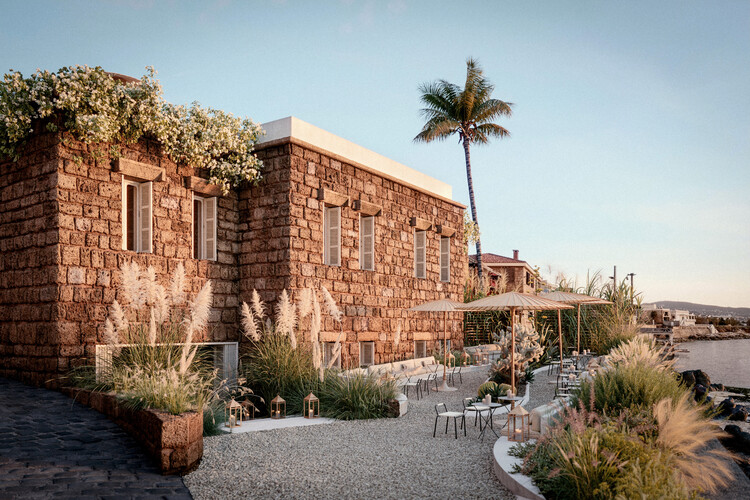 “A testament to Lebanese architectural history”, Villa Nadia is a private residence in Bei Mery, built in the mid-1800s, which now lies in a precarious state after being abandoned for 45 years. The rehabilitation project aims to highlight the historical layers while integrating the comfort of contemporary living. The design preserves the arched windows, the red-tiled roof and restores the woodwork using traditional techniques. The project reinstates the elegance of the interiors, restoring the chandeliers and the Carrara marble, preserving the timber beams, the arches, and featuring an array of staple furniture pieces.

The design of the glasshouse incorporates floral motifs “deduced from scrupulous research and analysis of traditional Lebanese ornamentation”, while the vaulted basement is transformed into a spa with earthy esthetics. At the same time, the new guesthouse is designed using timber and steel joinery, bearing the resemblance of a treehouse within the lush garden.

The Batroun Boutique Hotel project is also on intervention on existing structures, this time dating back to the 17th century. Located in Northern Lebanon, the two buildings are carefully restored using locally sourced sandstone and artisanal wood shutters, thus preserving the cross-vault architecture typical to local houses of the time. Connecting the two existing volumes is a white cement extension containing a cafe, with the interior courtyard featuring a central pond of Ottoman influence. Across the project, vegetation is used to link the different structures and frame a particular aesthetic.

In both projects, the botanical illustrations serve as inspiration for color palettes, and great attention is paid to the landscape, the choice of vegetation, which play an essential role in shaping the atmosphere of the place. The work of Carl Gerges Architects cultivates a sense of warmth, showcasing an appreciation for craftsmanship and local building traditions.