Save
MVRDV Begins Renovation of Shenzhen Tower
Share
Or
Copy

Work has begun for MVRDV's renovation of Shenzen Women & Children Centre, a mixed-use tower featuring an array of public functions, now in need of a comprehensive transformation. Constructed during the city's explosive growth following the Special Economic Zone designation in the 1980s, the building is one of the many nearing the end of their initial lifespan, and MVRDV's adaptive re-use project sets an important precedent for repurposing these buildings by bringing colour, greenery and a new layer of public spaces. 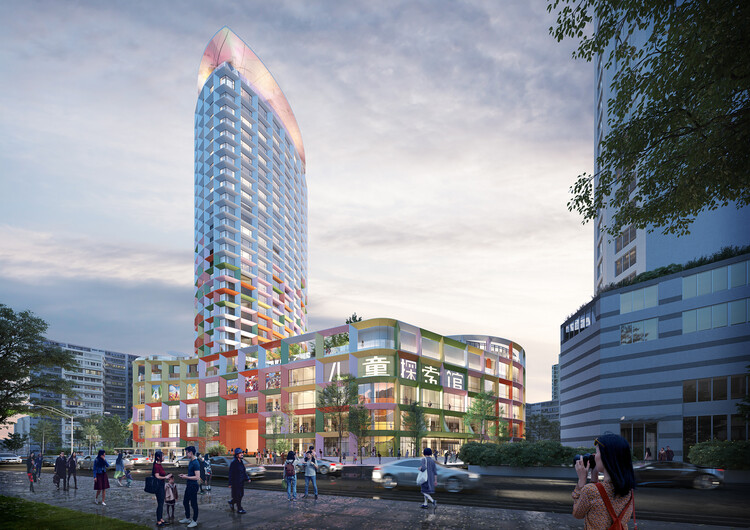 "Considering its development history, Shenzhen could soon see a devastating tsunami of unsustainable demolition – or it could ride a great wave of adaptive re-use", says project leader and MVRDV founding partner Jacob Van Rijs. "It's an important time to show how great and joyful this approach can be." The renovation introduces a new façade, rooftop gardens, new circulation elements as well as redesigned interior spaces, bringing new life to an underperforming structure.

The building's plinth hosts a series of community-oriented facilities such as a library, a theatre, an exhibition space, a family service hall, while the tower houses offices and a hotel. MVRDV adds a grid of exterior frames, whose colours communicate the interior layout, with a colourful plinth and a more restrained tower. The frames increase the façade's depth, providing additional shading.

Our design for the Shenzhen Women & Children's Centre shows what is possible in these buildings that are reaching the end of a fairly short initial lifespan. Retaining and improving a building is more sustainable than demolishing and building anew, and that is especially true when the building contains as much concrete as this one, a 100-metre tower with a voluminous plinth at its base. - MVRDV founding partner Jacob van Rijs

The inner courtyard, previously used for parking, will be transformed into a publicly accessible space with outdoor entertainment amenities for children. External staircases connect the courtyard with the roof gardens above the plinth, programmed as an event space and an educational playground, respectively. The design also transforms the two main lobbies and creates an accessible terrace on the tower's rooftop. 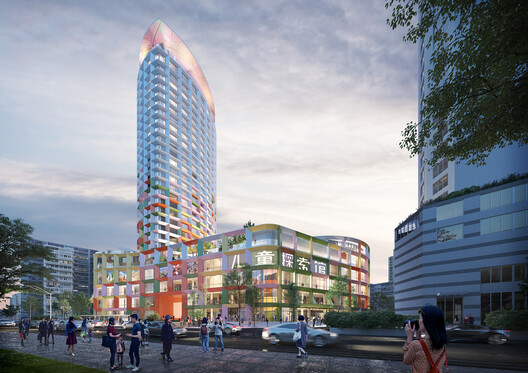