Led by Ma Yansong, MAD Architects have released their design for the Jiaxing Civic Center, a project that explores the relationship between city, nature, and people. The proposed center will be a new place of attraction for children, adults, and seniors, sitting on the city's central axis and surrounded by its South Lake, Haiyan River, and Central Park. The master plan will house three venues: the Science and Technology Museum, the Women and Children Activity Center, and the Youth Activity Center, all organized around a central green open space. The firm's latest public project in Jiaxing City, which is expected to be complete by the end of 2023, comes shortly after they unveiled their design for the Jiaxing Train Station earlier this year. 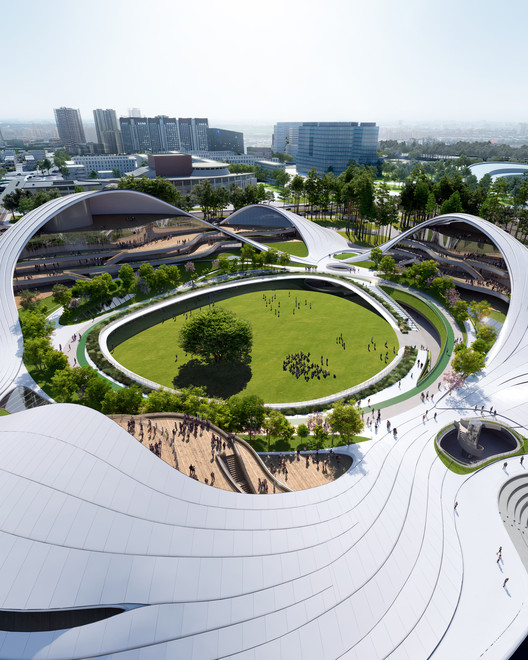 For the Jiaxing Civic Center's design, MAD Architects have developed an "artistic entity on an urban scale"; merging together architectural forms and landscapes in an area of 130,000 square meters. A large circular lawn will sit as the project's centerpiece, forming an open and dynamic new urban space and anchoring the three buildings together. This central space allows for the large architectural volumes to gradually dissolve into the landscape.

The center’s three organic-shaped venues are enclosed together by a circular roof to form one unified entity, inspired by the shape of the historic canal towns of the Yangtze River. These floating roofs form one continuous skyline, bringing a sense of uniformity to the structures. Regardless of where visitors are standing, the project's dynamic forms change the scenery with every movement.

To maintain the cohesiveness of the structures in the interior, all three venues, which serve different functions, are coherently organized under the curvy roof. The spaces for exhibition, theater, education, entertainment, and other facilities compliment each other organically. The center's first floor serves as a semi-public-semi-private space, connecting the facilities to the surrounding environment on all sides, either by bordering the municipal traffic, or connecting the central lawn with the parklands. This blurred space can be used for daily activities, or as an open-air plaza.

The terrace on the second floor creates a 350-meter-long landscape corridor, which the public can climb to as a walk or exercise, or visit the amphitheater and sunken plaza on the east side. The cascading terrace facing the central lawn in the building's interior interlocks and overlaps into multiple semi-outdoor spaces, separated by minimalist floor-to-ceiling glass.

We have created an undulating ring to serve as a garden-like living room for the city: an embrace. -- Ma Yansong

The waterfront building, which sits adjacent to the South lake, is covered with locally produced white ceramic panels. The choice of material responds to the traditional barrel tile roofs of the local village, and enhances the project's economic and energy efficiency. The original trees on the site are preserved as much as possible, complimenting the design of the landscape and forming a new natural park.