Read more
Save
“It's All About Continuing Our Cultures": In Conversation With Wang Shu On Designing Chinese Cities For Humanity

People are the purpose and scale of the city. What does a people-oriented city look like? On April 8, 2021, sponsored by "LIFE WEEK ", the first Sanlian “City for Humanity Award” Ceremony was held in Chengdu. It takes "Rebuilding Connections" as its first theme, and hopes to promote a discussion on social values and humanistic care in Chinese cities through a professional and communicative approach, such as awards at this special moment after the epidemic.

This award ceremony is the announcement of outstanding urban space design cases, and it also presents an understanding of how cities should be integrated into the environment, and carry human memories and emotions.

Here are the five award winners:

As an urban-level architectural design rooted in the local humanistic spirit and collective memory, the Xicun Courtyard has opened up a new dimension of imagination for the construction of public spaces in Chinese cities. The super-volume and the large-scale magnificence of the super courtyard form a complex contrast and interweaving with the diversified urban content, the multi-level public domain, and the meticulous management of multi-threaded social life, creating an “enclosure that includes openness and unity. The new urban spatial order, which contains richness and flexibility in regulation, perfectly interprets the core values of the award of "humanities, innovation, public, and aesthetics".

In the traditional neighborhoods of underdeveloped cities, the Lianzhou Photography Museum has created an architectural miracle with great humanistic care. While using local materials and low-cost construction methods extensively, the entire building still maintains a high level of design quality. Through exquisite boundary treatment and rich space management, the museum seamlessly connects with the surrounding residential styles and social life. It not only becomes a cultural beacon that illuminates the city but also provides a vibrant public space for the daily lives of nearby residents. It can be called China Contemporary architecture is a dual example of quality creation and social value contribution.

The Shanghai Community Garden Series is a very rare example of a successful designer changing a community or even a city through experimental urban actions: through community planting, a seemingly fragile means of transformation, using a simple method to resist and reverse the ruthless formatting process of the "real estate-oriented space" in the city, turning the unused corner space of the city into an emotional field with high social cohesion. The designer team not only provides action plans but also serves as the main body of the implementation of social activities. Gradually, it will help to establish a safeguard mechanism that is easy to learn and replicate for the implementation, promotion and sustainable development of the "community garden" concept.

In the context of China’s urbanization process, we have entered the era of stock transformation. We are facing historical buildings that conflict with the new urban planning. The architects who designed "Green Hill" regard land as a non-renewable precious urban resource that must be refined and processed. By creatively resolving the conflicts between urban traffic, landscape planning, and existing building volumes, the "Green Hill" has been transformed from an original functional structure into an ecological place that the public loves to see. It has not only become the highlight of Shanghai Yangpu Riverside Reconstruction Project, but also it provides a excellent design example for contemporary urban renewal in China.

On the basis of successfully solving the complex functional problems of the original 1,600 shantytown residents, such as the demolition of the original construction, the dredging of the water system, and the creation of a new commercial ecology, the team of architects spent 7 years completing a very rich and creative large-scale urban renewal practice. The designer has achieved the perfect balance of tradition and innovation, order and vividness through superb control ability: multi-type, diversified, multi-level buildings, public spaces, landscape facilities, and public artworks are mixed and intertwined. It seems to grow freely and naturally in the river of time. The works are rich in Eastern cultural observation and local humanistic care, and their aesthetic quality is also an outstanding model in the field of global urban design.

ArchDaily had the chance to interview Wang Shu, the judge, to discuss the issues that existed in China's urban development based on the shortlisted awards.

ArchDaily: In the shortlist, what do you think these projects have in common? And what are the obvious changes in the urban development before the Olympics and the World Expo, the 10-year project at the beginning of the 21st century?

Wang Shu: I think the biggest and most obvious change is publicity. The role of architecture as a public space has received unprecedented attention. Whether it’s the Olympics or the World Expo, in fact, few Chinese have invested so much enthusiasm for architecture before. Architecture suddenly becomes a kind of meaningful space.

You can see similar spaces being duplicated everywhere in China. What’s more, the public space of the city is no longer like the original one, which only serves local life. You will find that they all have this “want-to-be-known-globally” quality. I think this is a very big change.

ArchDaily: We realize that architects and the public have a critical attitude and negative sentiment towards the completed buildings before the World Expo and Olympic Games. However, in these shortlisted projects, we have switched to a relatively positive attitude. What is the trend? What are some of the positive demonstrations?

Wang Shu: It’s actually difficult to describe by the word “trend” because there are quite a few different trends. This is what I think is the second major change in Chinese architecture: from imitating Western fashion to beginning to reveal some thinking patterns and showing differences.

I think this kind of diversified development is remarkable. It is not just about the issue of a certain trend, but a significant improvement in design quality.

ArchDaily: The theme of this award is "2020 Theme: Rebuilding Connections". The projects currently shortlisted were built before the epidemic. In the face of the pandemic outbreak, what organic changes have been made to the shortlisted projects, and what are your observations? What is the impact of the epidemic on the selection? Will you become more stringent when you are evaluating the space?

You can find that the boundary between privacy and publicity has been broken. Some people may think that the epidemic has promoted the arrival of the digital age. In other words, the biggest problem is the emergence of a state of "unclear cultural attributes", which is very Chinese.

Chinese people like to say "I am very Chinese", but in fact, Chinese cities are the cities with the most unclear cultural attributes in the world: Chinese cities often make people wonder where they are. I often jokingly say that this is the future of mankind on the moon and Mars. Cities are losing their cultural attributes. They are simply a state and a commodity. I think the biggest problem Chinese society is facing is that all construction activities have become commodities.

Wang Shu: Public standards cannot be used as a basis for evaluation, because the popularity of the Internet tends to have a strong herd behavior. On the contrary, a group of architects should have the spirit of self-criticism and self-reflection. Today, architecture has the power to reshape living space. It can build living space or destroy it on a large scale. Architecture is not one-sided. Under such a premise, I want to particularly emphasize the continuity of culture, which is very important.

ArchDaily: So what do you think of the shortlisted project Super Wenheyou?

ArchDaily: You participated in the "Natural Construction Award" last year. How do you think the evaluation criteria of these two awards are different?

Wang Shu: Relatively speaking, the "Natural Construction Award" discusses more transcendent topics, which are about architecture itself. The “City for Humanity Award” focuses on the city, which is a particularly complicated matter.

Just by looking at the evaluation criteria of the “City for Humanity Award”, it is not difficult to understand that the "Super Wenheyou" will be selected. If it is evaluated according to the criteria of the "Natural Construction Award", this project will definitely not be selected. The two awards have different orientations and standards.

ArchDaily: In the category of community creation and urban innovation, the shortlisted projects are actually related to the decisions of operators and developers. As a designer, what advice do you hope to give decision-makers?

Wang Shu: I think the whole Chinese society has to reflect on a problem: we are too superstitious about the power of planning and design, and all these forces are actually the power of a few people from top to bottom. It ignores the power of the city itself and the power of life itself. In the long run, this will only hurt Chinese cities. 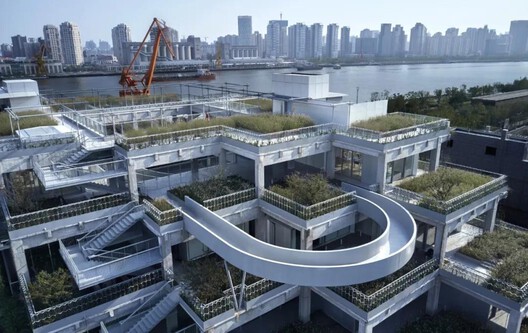