Save
An Irish Embassy in Tokyo and a Bridge Over the Nile: 11 Unbuilt Projects Submitted to ArchDaily
Share
Or
Copy

Focusing on competition entries, this week’s curated selection of the best-unbuilt architecture draws from proposals submitted by the ArchDaily Community to highlight award-winning design across the globe. Made for diverse programming, the entries each explore how to build upon the identity of local sites to win their respective competition. Together, they showcase contemporary formal, spatial and conceptual approaches.

The award-winning entries include a range of different projects: a mixed-use redevelopment proposal for a post war suburb of Antwerp, a high-rise on the site of a historic former Police HQ building in downtown Frankfurt, a leafy urban heat island proposal in Abu Dhabi, and a ‘Ireland House’ in Tokyo, which will bring diplomats and state agency personnel together under one roof. These are but a few of the best unbuilt architecture this week.

Read on to discover 11 curated projects highlighting competition-winning designs, along with their project descriptions from the architects.

The team BOGDAN & VAN BROECK and Shift A+U has been announced winner of the design competition for Veld 15a in Rozemaai. The project consists of 135 social dwellings, 30 affordable dwellings, a nursery, commercial facilities and a variety of public spaces. It is part of a large transformation of Rozemaai, a post war suburb of Antwerp. The jury, chaired by city architect Christiaan Rapp, praised the winning entry – Rozemaai at Home – for the way it relates to the fragmented urban context and in particular to the new landscape of the nearby creek valley.

The building is located on the plot in such way that it creates a narrow, yet strong, silhouette, which continuously grows larger towards east. The mass integrity lies within its ability to create a dialogue with its surrounding arrangement. The regular curving of the facade, resembling a common city framework, awakens a desired tension between ´old´ and ´new´. The shaping of the street facade, on the ground level, adapts accordingly to the need of widening the sidewalk hidden in the arcade. On the top floor the dwelling recedes, fades away from the street border and creates space for a terrace with a covered garden with spectacular views.

The historical former Police HQ building is the key point of identification in the new ensemble and defines the overall design. The integrating element is the theme of the black shimmering slate roof which is emulated in modified form in all the new buildings. The high-rise extends this theme skywards and establishes itself as the symbol of the ensemble in downtown Frankfurt. The superimposition of a contextual polygonal underlying figure and the transformation of an archetypal tower and/or roof shape gives rise to a highly varied volume.

“Leafy” steps in to address urban heat islands in Abu Dhabi. It is an artificial garden made of modular, kinetic, thermobimetal, flabellate umbrages with a shape reminding the date palm leaves- to maintain a sustainable environment for actual vegetation and plants in the near and far future, providing sufficient shade and water, along with creating awareness about the conscious use of water and reminding the legacy of planting more trees. Metals with different properties are bond together to react accordingly to the rising and falling temperatures that make the blades of leaves expand at noon, forming canopies, and contract at night allowing wind to flow through.

In September of 2019, The Department of Foreign affairs, supported by the RIAI, commissioned an architect-led team to design and deliver the Ireland House in Toyko, by means of an architectural design competition. As part of the ‘Global Ireland 2025', the government will seek to expand its presence in the Asia Pacific region. Part of this expansion will incorporate the development of ‘Ireland House’ in Tokyo, which will bring diplomats and state agency personnel together under one roof. The architectural form identifies an interweaving of the historic Irish Tower House (caisleán) and the traditional Japanese townhouse (machiya). In doing so it reflects as a strong aggregated and sculpted monolith that cradles delicate glazed timber lanterns containing the principal functions of the brief.

10 Design has won a competition to design Landmark 55 in the emerging Starlake Urban Area of Hanoi, Vietnam. Located in the heart of a prominent district, 10 Design’s proposal for this mixed use destination will become a new icon on the skyline of Hanoi. The development includes two towers that create a visual gateway and provide active pedestrian connections through the urban context. Landmark 55 provides a total of 178,888sqm of area including office, hotel, condominium hotel, retail and F&B. The two towers contain a 55 storey hotel and condominium hotel tower with a dramatic sky-lobby and a 41 storey office tower. A four storey retail pavilion is located between both towers in the middle of the site with an active F&B roof garden and a hotel amenity terrace that connect across the site. Ground level plazas and pedestrian streets activate both edges of the central retail pavilion and are lined with retail and restaurants.

Ragunan Bio Park is a masterplanning project transforming from conservative wildlife to conservation-bio park with ecocentric design approach. Restoring flora and fauna to its natural habitat is the main concern in design, as well as minimizing segregation between nature and humans. This design has won a national competition design Ragunan Zoo by Forestry and Park Service DKI Jakarta. The new Ragunan Zoo will be known as Ragunan Bio-Park, it becomes the new city identity that protects the natural environment and conserves wildlife with the Indonesian nature landscape.

The development of the Pilatusplatz site (Pilatus Square) is intended to take account of the prominence of the location and the great appeal of the project. The design is intended to strengthen the identity of the location by taking its strengths into account and highlighting them. The buildings to be developed are intended to give Pilatusplatz a spatial setting, while open spaces are to be redefined and given a new, high-quality design. The city authorities have emphasised the importance of a first-class and high-quality façade design. The central location on Pilatusplatz is predestined for the settlement of value-added-intensive companies.

Living Pedestrian Bridge over the Nile

The first-place winner for the Rifat Chadirji Prize 2020 and the People’s Choice Award is a team of five from Cairo, Egypt. The main objective of the living bridge is to maximize pedestrian exposure to the Nile, via stitching the urban fabric of the two banks together. The form was generated as a result of two main paths. Firstly, an unobstructed linear path directly linking the Egyptian Museum with Cairo Tower. Secondly, a semi-elliptical path was generated to embrace the two opposite banks; the Cultural Nile Plaza and the Elevated Garden. This path is meant to be pleasant, playful, and links successive attractions and socio-economic hubs.

Mulder Zonderland architects, in cooperation with the local office Moser Architekten, has won a competition for the renovation and extension of a church from the 1950s in the German town of Lörrach. In addition to its existing function as a church, the project will create a new heart for the neighborhood, with a café, kindergarten and space for people with social or psychological problems to receive care. Next to the church and extension, the team also has designed a masterplan for about 55 apartments on the adjoining site. 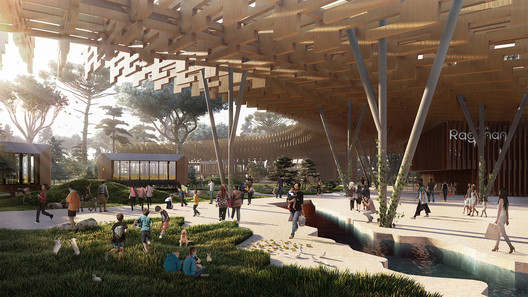