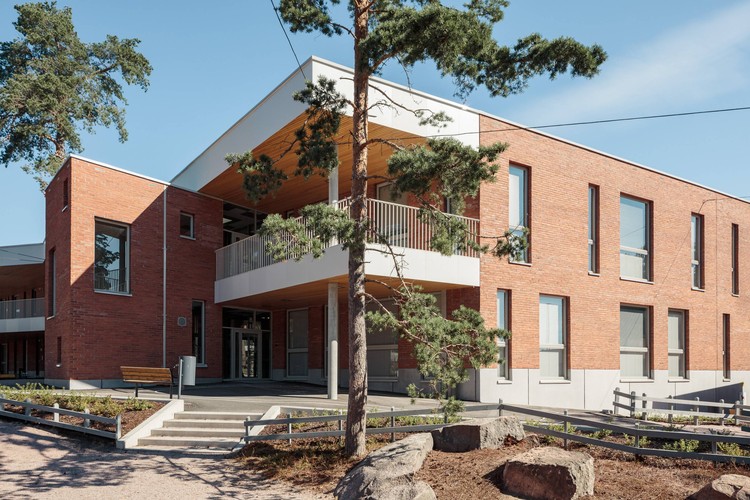 Text description provided by the architects. General Description The Lauttasaari Day Care Center is going to host places for 250 children. The functional aim for the premises is to support on the one hand the small group activities, on the other hand, to offer possibilities for spontaneous play and creative activities. The starting point for the design process has been activities in small groups, yet it is also possible to arrange activities for various group sizes according to need. The bilingual daycare center is a collective project of Early and Preschool Education and Helsinki Local Education departments. The zoning plan No. 12338 made for the plot has been ratified on 17.2.2016. The construction is planned to begin during autumn 2017 and the project is estimated to be completed in early 2019.

Surrounding disturbances The noise caused by traffic on Isokaari street partially exceeds the required maximum noise level (55 dB) close to the Isokaari street area. In the arrangement of the plot, the noise has been taken into account by aligning the building with the Isokaari street, running parallel to it and thus forming a natural barrier against the traffic noise. Natural Environment The plot is situated next to a small spruce forest connecting Myllykallio and Länsiulapanniemi districts to each other. The spruce forest has a specific significance as a connector and an ecological corridor between the forested areas of Lauttasaari.

The new daycare center does not disconnect the corridor. The Building The architecture is based on the functional targets of the building and the specific qualities of the building site. The two-storied building volume is located next to the plot border on the side of Isokaari street. Only a narrow strip for vegetation and space for service entrance for the kitchen has been left between the eastern facade and the plot border. The building frame and ancillary cold storage space at the south end are both aligned with the street and shield the playgrounds from the traffic noise. Also, the parking lot in the north is separated from the courtyard with a storage extension. The design concept aims for efficient use of space and sensible structural and technical solutions. Within the relatively deep building mass hallways to the different group areas are integrated into a meandering central corridor.

On the streetside are located multi-functional group rooms that can be joined together by communicating doors and have partial glass walls towards the central corridor. On the courtyard side are vestibules specifically designed for handling dirty outdoor clothes, bathrooms, and small-group rooms, alongside the aforementioned group rooms. Common spaces and technical rooms in the middle divide the long building: three Swedish speaking children's’ group area entities are located in two stories in the north end of the building, and five Finnish speaking children’s group areas in two stories in the south.

The evening use area in the middle of the ground floor can be separated from the children's’ group areas. The building is founded mainly on bedrock and has a crawlspace underneath. Outer walls have a concrete structure with the inside core acting as the supporting structure. The facades are brick-clad. The structure of floors, including the base floor, is formed by hollow-core slabs supported by concrete pillars.

The Percent for Art, Visual Artist Maija Luutonen The artwork has multiple parts: it spreads to the interior of the daycare center, into the stairways, and around the courtyard. The central piece is a wall textile located in the banquet hall, which is also used for sleeping. The artwork is located on a concrete wall with dimensions of three by seven meters. The topic of the artwork is a dynamic yet calm surface with changes and secessions happening within. Particles of various shapes move on the surface of the artwork and start to stand out slowly while watching the piece.

The idea is that detached particles that have started to move are blown in the air by a gust of wind and end up around the site. The wall textile is a kind of a map from which detaching particles are repeating in different forms around the plot. An important set of elements are the many glacial erratic blocks left standing around the courtyard. Yard The courtyard is located on the south side of the daycare center and has varying natural conditions of both bedrock and moraine terrain where local trees, mainly pines grow. The natural conditions of the yard are utilised in the arrangement of play areas for the children. 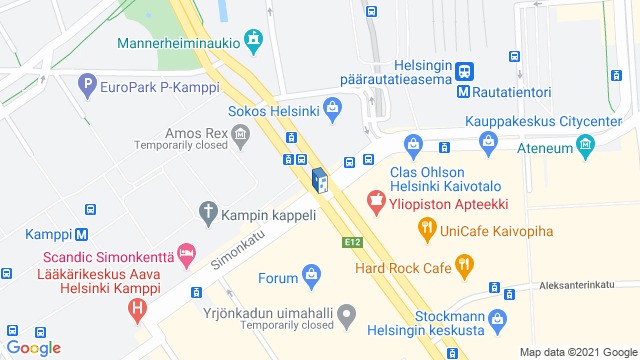