It’s a given that the coronavirus pandemic has had wide-ranging impacts on construction projects large and small over the past 10 months. So, what about the construction of new buildings that share the defining characteristic of being superlatively tall?

As detailed in an annual report published earlier this month by the Chicago-headquartered Council on Tall Buildings and Urban Habitat (CTBUH), newly completed skyscrapers experienced a global decline of 20 percent in 2020 compared to the previous year due, both directly and indirectly, to the COVID-19 crisis.

Per the CTBUH, 106 new buildings qualifying as skyscrapers (200 meters/656-feet tall and up) joined the skylines of cities across the world last year. Of those 106 buildings, 21 of them qualified as “supertalls” at over 300 meters/984 feet. In 2019, the figure was 133 new skyscrapers, which is actually a dip from 2018 when the number of completed skyscrapers reached an all-time high of 148. The 2020 number is the lowest it has been since 2014 when 105 new skyscrapers were completed. The 21st-century kicked off with a mere 23 skyscrapers being completed in 2000 and has been gradually marching upward ever since with the number breaking the 50-plus threshold in 2008 (54) and the 100-plus threshold six years later in 2014.

Last year was also the first year since 2014 that a building over 500 meters/1,640-feet-tall was not completed.

As elaborated by the CTBUH, the 2019 decline was largely a factor of the Chinese government putting the kibosh on “weird architecture” and overly conspicuous buildings, including ultra-lanky ones. This mandate “constituted a strong factor that has persisted into 2020” according to the CTBUH, although coronavirus played a new and prominent role in dragging the numbers down by another 20 percent.

In the report, CTBUH mentioned being “anecdotally aware” of nine projects in Brazil, India, and Malaysia that had their completion schedules pushed back to 2021 because of the pandemic; the report also pointed out the flurry of mandated work stoppages on construction projects across the United States throughout the first half of the year although these stoppages could not be directly correlated to any specific pushed-back completion dates for tall buildings. The report also called out quarrels over zooming and military conflicts as being the reason why some specific projects failed to reach completion.

“As tall buildings are often lagging economic indicators, any chilling effect that economic conditions or work interruptions may have had on new project starts, or projects that were under construction in 2020 and were scheduled to be completed in 2021 or later, remains to be seen,” explained the report, noting that the impact of the 2008 financial crisis on skyscraper completion dates didn’t become evident until 2010 and 2011.

Year-to-year declines aside, in 2020 a modest handful of Chinese cities (Nanning, Guiyang, Zhuhai, and Jinan) all welcomed their new tallest buildings, all of them qualifying as supertalls. Record-setting non-supertall skyscrapers were completed in several other Chinese cities as well. Melbourne and Sydney, Australia, also saw the completion of their new tallest buildings in 2020 as did Mumbai, Manchester, and Monterrey, Mexico.

Of the 106 skyscrapers completed last year, the two tallest overall— One Vanderbilt (1,401 feet) and the residential Central Park Tower (1,550 feet)—are both located in New York City, which is somewhat of a rarity according to the CTBUH. The 52-year-old nonprofit’s home base of Chicago welcomed the sixth tallest building to be completed in 2020, the 1,191-foot St. Regis Chicago. Also notable is the fact that four new skyscrapers were completed in London in 2020—a record number of the British capital—despite the economic apprehensions spurred by Brexit. The eighth-tallest building completed in 2020, the 1,112-foot Heartland 66 Office Tower, is located in Wuhan, the city in China’s Hubei province that served as an early epicenter of the pandemic.

The CTBUH predicts that the number of completed skyscrapers over the course of 2021 will rise comfortably between the 125 and 150 range with a majority of them being in China including in Wuhan. The full "CTBUH Year in Review: Tall Trends of 2020" report can be read here [PDF]. 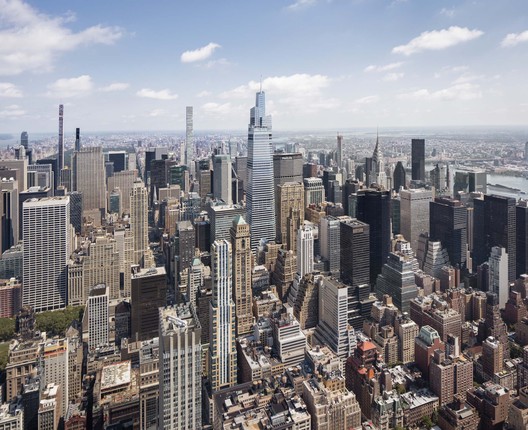