reBENT seeks to design self-supporting structures and explore complex shapes in concrete, avoiding the use of autonomous systems such as 3D printing robots. According to the team members, "our goal is to use tubular geometries, using cheap and universal materials as formwork, such as PVC pipes and reinforcing bars, under computational design explorations, managing the active bending properties of the material through generative controlled curves through polygons".

How were these explorations carried out? The team explains it to us. "To expand the geometric composition, we generate complex bending shapes in a controlled computational assembled shape. We use the structural constraints of 20mm PVC pipes to analyze different bending shapes using curve testing. We generate a simple example of active bending for testing the pipes and their assemblies. The results were promising as we were able to replicate the digital model. In this first approach, we implemented augmented reality by connecting the designed components to 'Fologram' via Rhino-Grasshopper. The implementation on our mobile devices allowed the holographic displays to guide the bending of the tubes."

"We then cataloged the design languages and retested different types of active folding examples. We looked to find a guide that could connect to previous studies, using primitive geometries. We implemented polygon explorations to find geometric shapes that would function as a computational bending framework. Furthermore, we use Karamba, Kiwi, and Kangaroo (Grasshopper plugins), to structurally test the generated geometries with specific material constraints, evaluating the behavior of pipes under certain design conditions."

Although these results were highly positive, the researchers found some structural problems, such as brittleness and lack of strength. "For this reason, we incorporated 4 mm rods to propose a construction system that offers extra strength. To join the reinforcing bars to the PVC tubes, we designed a series of 3D-printed flexible TPU joints. Their shape depends on the quantity of rebar to be joined."

The team continued their explorations with generative algorithms to produce complex curves, incorporating their structural analysis to generate a manufacturable geometry while also introducing the packaging system. "We developed computational simulations and physical explorations of concrete spraying to understand what the proposed geometries might look like after casting. To efficiently cast the tubes, we used a spray gun to cover their screens. To minimize the casting process, we sprayed glue on the pipes and then GFRC concrete, which adhered properly. A series of tests were carried out in order to specify the amount of concrete, down to 3 layers for small concrete structures and up to 10-12 layers for habitable-type structures that are structurally self-supporting. We tested this on small-scale structural objects, such as columns and architectural components, achieving a variety of possible shapes. As an example of the generative implications of this method, we based the following examples on complex shapes that are difficult to achieve without the help of holographic displays," they add.

The team used an earlier series of curved designs to implement the system, increasing the feasibility of creating a habitable structure. The system was adapted to the proposed geometry, functioning as a self-supporting structure. To wrap these habitable spaces, "we designed a method to generate surfaces throughout the substructure, using polygonal orientation to generate curves within the main structure. In addition, a substructure functions as support that joins different capsules to a single element, achieving an habitable space on a human scale."

Next, the polygonal guide was implemented for a custom fabrication where the user has the opportunity to build foundations, supports, and spaces. "The guides are shown as grids to the user, where they can continue to create different compositions. Additionally, we implement generative solutions to different compositions, allowing the user to interact with different possibilities of a single model, enhancing systems that generate other systems, avoiding architectural singularities in order to democratize the proposed designs," they add.

The team proposed three different compositions. "First, a pavilion that uses different components of our design language. Since large structures cannot all be poured at once, the components are also used as concrete chunks. The construction process for these spaces is no longer conventional because most of them need the structure to be built and molded according to the composition. And with the help of AR, the connectors and secondary structure can also be completed quickly. The initial architecture is divided into several large pieces, and it is built and molded separately for quick and easy construction. On the same principle, the pieces will be made on the ground. Then the AR will also guide the assembly in order, direction, and angle, and will re-mold them to improve the stability of the structure.

The design of the pavilion consists of a stable central structure with wings extending on both sides, which is then reinforced with the "Truss" structure, to form a complete skeleton that supports the roof with a hierarchy of five layers and two main joints used in the digital model. "Finally, we designed a habitable residence structure with the same system, promoting a stable structure that can be built with limited economic resources. The design is based on slabs that connect the structural system to each other, creating habitable and usable spaces that adapt to any design to your composition".

The pavilion and a component were tested in a real setting, with people from Ecuador who had never used AR or other mixed reality devices. The holographic fabrication of both elements was a success and they were built in just 2 days, working 5 hours on each. "The PVC tube-rod system first requires creating a guide with a single set of tubes and then 'following the shape' with the rest of the elements. Finally, the concrete spraying is a more elaborate process; after the second layer, the concrete fully adheres to the structure, allowing the remaining layers to adhere more effectively." 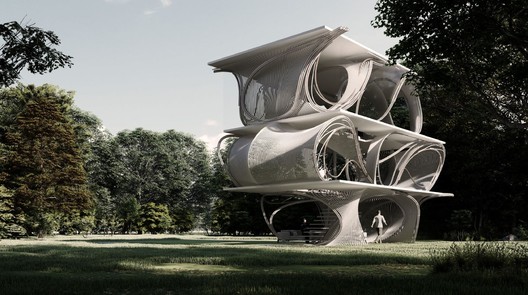