Transforming the typical artistic experience, Snøhetta proposed a design to renovate the Blanton Museum of Art at The University of Texas at Austin. The comprehensive grounds remodeling seeks to “unify and revitalize the museum campus, […] through architectural and landscape improvements”. Construction is scheduled to begin in early 2021 and conclude by late 2022. 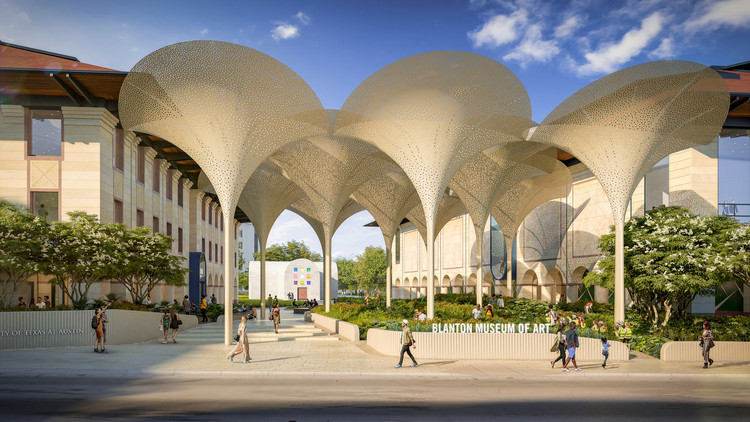 The Blanton Museum of Art, founded in 1963 and famous for holding the largest public collection in Central Texas, has just revealed plans to transform the 200,000 square feet plot that encompasses two main buildings. “Opening the museum into the city, inviting people in not just to see great art, but also to linger, gather, and be inspired before and after each visit”, Director Simone Wicha adds that the new grounds initiative will create an inclusive destination. Led by Snøhetta, the renovation works will also feature the first major public mural commission by Cuban-American artist Carmen Herrera.

Centered on the Moody Patio, a gathering space between the existing structures, the proposal generates “15 elegant, petal-shaped structures, creating a shade canopy at the southern edge of the Blanton’s campus”. Inspired by the initial vault-design of the museum, the addition will create a visual identity for Blanton. Changing the experience of visitors, the new architectural elements will highlight accesses. In addition, “to amplify the Blanton’s popular and innovative music programming, the design incorporates two raised platforms on the Moody Patio to stage live music and other performances”.

The Blanton holds a prominent place at the intersection of the new Texas Capitol Complex, and it also serves as the gateway to the university campus. Our inventive landscape and reimagined building entrances fulfill that promise. Snøhetta’s design expands the museum’s world-class art collection beyond the museum’s galleries and creates a highly visible public place of— and for—the arts and Austin. -- Craig Dykers, founding partner of Snøhetta and alumnus of the UT School of Architecture.

On another hand, the project suggests landscape improvements, introducing pathways, and gathering areas that enhance exploration and relaxation. On that note, Director Simone Wicha states that “I believe that landscape has the power to transform a community, very much in the way that great art can transform our hearts and minds”. Drawing on the unique character and resilience of native Texas flora, the proposal will introduce more than 25,000 new plants to the museum grounds, 95% of which are native to the state.

Serving university and city communities, the new grounds initiative will also enhance the northern and southern gateways to the museum site, as well as the entry points for visitors to the museum and UT. A cultural anchor in the rapidly transforming district, the Blanton project will put in place “a winding pathway landscaped with native plants will meander throughout, connecting all approaches to the museum and offering small garden areas and seating for relaxing and socializing”. Moreover, the lobbies of both buildings will be redesigned, to accommodate the overall changes of the campus. 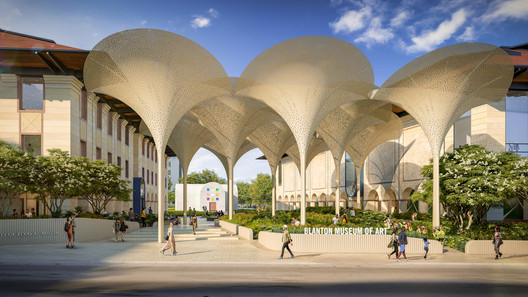