Partially inspired by the work of Jane Jacobs, who viewed neighborhoods as social connectors, the idea behind 15-minute cities was developed by Carlos Moreno, a Sorbonne professor who aimed to improve the urban quality of life. With “hyper-proximity” to amenities, jobs, government services, public parks, shopping, and a variety of entertainment only by bike or foot, the concept reconsiders how cities can be better designed to support the basic needs of residents. Within this small radius from their homes, stronger communities will be created that allows residents to feel more invested in the businesses and services in their area.

While the 15-minute city might seem like a utopian impossibility, many policymakers around the globe are already beginning to give their urban cores new life with better city planning, the decentralization of services and goods, and new laws that rezone streets to remove cars and make way for pedestrians and cyclists. One city spearheading this urban strategy is Paris under the leadership of its Mayor, Anne Hidalgo. In fact, it was one of the pillars that drove her political campaign to successful re-election. Her goal is to encourage the development of more self-sufficient communities within each arrondissement of Paris. Dubbed the “ville de quart d’heure”, or the quarter-hour city, the goal is to transform the capital into more efficient neighborhoods to reduce pollution and create socially and economically diverse areas. At her unveiling of this plan, Hidalgo insisted that this revitalization effort would incorporate other strategies as well- including a 5,000 person unarmed police force, a massive undertaking to plant more trees, and heavy fines for uncivil behavior such as littering. More notably, she stated that she wants to continue to pedestrianize the capital by putting a bike lane in every street within the next three years- all while taking away 60,000 parking spaces for cars.

4 Important Things to Consider When Designing Streets For People, Not Just Cars

Along with Paris, Melbourne has created its own take with a 20-minute neighborhood where everything is within a 20-minute commute. Copenhagen, perhaps a more well-known example, has centralized its sense of urbanism around the reliance on bicycles with a layer of proximity to desirable places. Even American cities are now taking a closer look at this method, especially with the lessons learned and self-reflection as the COVID-19 pandemic looks ahead to new futures. At a time where people often spent 1-2 hours a day just commuting to work via private transit methods, there’s been an increased focus on returning the streets to the people, finding ways to reduce the heavy reliance on cars and recreate a sense of neighborhood that has diminished with the increase of urban sprawl. Here Technologies has created an interactive map that shows which cities are already tilting the scale towards being more aligned with the 15-minute city goals. While some neighborhoods are walkable now, even more, will likely move in this direction as city planners begin to use this framework to develop their own future city concepts.

The next time you travel 30 minutes by car to your local mall, consider the time you’d save and the enhanced quality of life you’d have if it was just a 15-minute bicycle ride away instead. The 15-minute city is not just an urban trend, but a highly feasible design strategy that could soon be coming to a city near you. 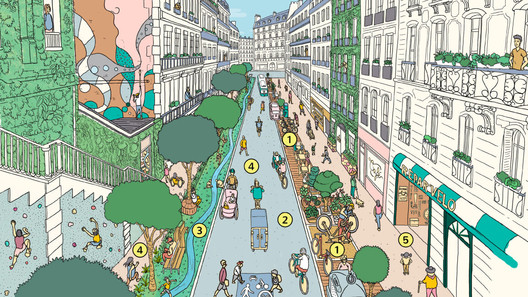