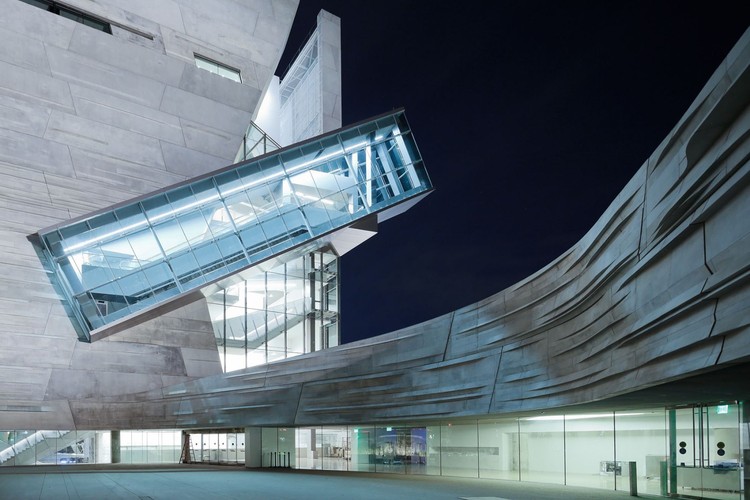 Beyond the Arts District, Dallas features numerous projects that simultaneously explore the possibilities of public space, programming and new building methods. Filled with modern projects, the city has remarkable landmarks and examples of 21st century historic architecture. Part of the largest land-locked metropolitan area in the United States, Dallas merges with Fort Worth to house works by Frank Lloyd Wright, Louis Kahn and Eero Saarinen.

Taking a closer look at the city’s emerging architecture, the following collection explores contemporary projects throughout Dallas and their approach to civic design. Created by architects and firms from around the world, the collection features bold formal moves and thoughtfully crafted experiences rooted in the dynamic, expansive character of Dallas.

While no building can ever represent the inhumane injustices that occurred during the Holocaust, it can certainly be a vessel for the meaningful presentation of the repercussions, human experiences and realities thereof to ultimately influence impactful societal change. The new Dallas Holocaust & Human Rights Museum, dedicated to teaching the history of the Holocaust and advancing human rights, is in West End Historic District of downtown Dallas.

The Dallas Arboretum and Botanical Garden’s exquisite landscape and facilities offer educational and cultural programs for all age groups, significantly contributing to the Dallas community. Phase one of their expansion, the new, eight-acre Children’s Adventure Garden extends the Arboretum’s northern end, animating a previously undeveloped and steeply sloped portion of the site.

The new Winspear Opera House in Dallas redefines the essence of an opera house for the twenty first century, breaking down barriers to make opera more accessible for a wider audience. Responding to the Dallas climate, a generous solar canopy extends from the building, revealing below a fully glazed sixty foot high lobby. This establishes a direct relationship between inside and outside, enhancing transparency.

The Dallas Theater Center (DTC) is known for its innovative work, the result of its leadership’s constant experimentation and the provisional nature of its long-time home. DTC was housed in the Arts District Theater, a dilapidated metal shed that freed its resident companies from the limitations imposed by a fixed-stage configuration and the need to avoid harming expensive interior finishes. The new theater needed to engender the same freedoms created by the makeshift nature of its previous home.

The Charlotte and Donald Test Pavilion is a 3,700 square foot multi-function space located at “A Tasteful Place” in the Dallas Arboretum and Botanical Society. The facility overlooks a 3.5-acre garden filled with fruits, vegetables, herbs, and flowers. A demonstration kitchen in the pavilion serves as a site for cooking classes, demonstrations, educational programs and special events for adults and children.

The Margaret Hunt Hill Bridge is a signature component of the City of Dallas' urban revitalization efforts, but it is also the first vehicular bridge Calatrava built in the United States. His concept of linking the City's two river banks by a series of dramatic bridges and boardwalks across a flooded lakeside environment sought to revitalize this under-used resource in the heart of the city, and create a recreational facility as important to Dallas as Central Park is to New York City.

Museums, armatures for collective societal experience and cultural expression, present new ways of interpreting the world. They contain knowledge, preserve information and transmit ideas; they stimulate curiosity, raise awareness and create opportunities for exchange. As instruments of education and social change, museums have the potential to shape our understanding of ourselves and the world in which we live.