The team led by Chilean architect Cristián Fernández has won the National Architecture and Landscaping Competition for the New Museum of Santiago (NUMU, Nuevo Museo de Santiago), a cultural project that will house the Fundacion Engel art collection in the Bicentennial Park in Santiago, Chile.

According to the Constructo-led competition, the winning proposal should merge architecture and landscape through a cultural approach. The project should be, at the same time, an architectural icon, a physical platform for contemporary artists, a collaboration space including other cultural institutions, and a place that gathers both the national and international community.

There are many reasons why this project deserved to win the contest. First, it makes a very clear commitment to the park. Almost hugging him. At the same time, it engages with the landscape behind: the buildings and mountains in the distance. But more importantly, it is the distribution of the galleries and their effectiveness in the use of space.

Official description. The word “museum” comes from the Greek word musa, the goddesses that provide inspiration to poets and artists. We understand the museum as the place where we come to seek out inspiration. This building is inviting…it signals openness towards the community that surrounds it. Qualities like transparency and welcoming spaces create the type of place where people gather together.

We propose a building that invites one to linger, that promotes the interaction between people and art, in all its manifestations. The park, its views, the external spaces, and the exhibition areas, present in the building, all create a place of congregation and stimulation that serves to inspire. Diversity is represented by exhibition rooms floating at the upper level and oriented in different directions, a swirl of air or a star or a hand whose fingers reach out in a gesture of openness and diversity. Unity is incarnated in a central open space, a large platform that ties the building together and can be filled by a variety of possibilities and events. The building is an “interface” between the scale of the park and urban fabric.

The building is rooted in the land surrounding it. Its volumes are situated in a way to highlight the peaks and landmarks that historically and geographically make up the Santiago Valley. The focus of the central courtyard is Manquehue Hill (from Mañkewe, a Mapudungun word meaning “where the condors fly”), the tallest hill in the valley, which has a significant connection to our culture’s origins and history. To the West, the image of the Virgin Mary stands framed by San Cristobal Hill, representing Spanish colonization and our half-European, half-indigenous culture. Finally, to the East, the building opens towards the heights of San Ramón. This is the great geographical scale, the Andes mountain range, which runs the entirety of the continent and hugs, within one of its folds, the greater city of Santiago. The geometry of the building is organized so that it values the most significant geographical landmarks in the Santiago Valley. This way, the building’s conceptual matrix creates a gesture of inclusion, bringing to light the worldview of the original peoples of Chile.

The building can be understood through its three levels. Each one of these levels has well-defined characteristics in terms of material definition. Below, the walkways, ramps, and stairs are made of acetylated wood, which serves to create a surface that connects the city and the park with the building and to convey a friendly, inclusive character. Above, the exhibition rooms that float above the courtyard, coated in white limestone brickwork, incorporate translucent lighting elements, allowing these spaces to be retro-illuminated. At the intermediate level sits the Lobby, connected to the street, the central patio, and the park. Here transparency (glasswork) is the main standout feature.

One enters the museum through a large ramp that leads to the “Events Courtyard” and, from there, to the Lobby. A large levitating reception desk allows for ticket sales and an information desk, as well as integrating the Gift Shop. The Lobby, the Gift Shop, the “Events Courtyard”, the Cafeteria, and the Restaurant all root the building to the “urban” lifestyle. From street-level, this living interior linking the street, the patio, and the park is transparent and open. The artworks themselves can be seen from the city and from the park. It is a generous and inclusive space.

The “Events Courtyard” is an open space designed to bring diverse artistic activities together at the heart of the building. This courtyard will be one of the main exhibition areas, alongside the galleries. It will be an open space filled with life, diversity, and art.

These three large spaces “float” within the building. They can be accessed from a central area, which looks out over the Events Courtyard. The placement of these galleries allows for different use patterns: connecting the rooms and creating a continuous exhibition space, or allowing each of them to be used separately. The interior of each room is delimited by straight and lightly curving walls; these give the greatest possibilities for interior configurations. They have a regular ceiling structure that permits flexible exhibition displays. During the day they are bathed in indirect and controlled natural light; night illumination maintains these same characteristics. The rooms have two terraces which are extensions of the exposition spaces

This is a simple space that allows at least two different, specialized configurations. It has a system of retractable theater-style seats which creates a flat space apt for performance, dance, and other similar activities, or - when the seats are in place - the space becomes a sloped auditorium - perfect for movies, conferences, theater, etc. In order to optimize these configurations, this space can be accessed from the first floor or from the lower plaza level.

This section requires a sufficient amount of independent operation so that students and the general public can meet here without passing through the museum’s interior, closed-off areas. At the lower plaza level, the education rooms and the library are organized around a patio-garden, which can be accessed from the museum or directly from the park. This patio serves as a space for workshops associated with the educational spaces.

This is a 10 x 10 meter space with an interior height of 6 meters. This subterranean space is constructed with thick cement walls built so as to provide total acoustic isolation. It includes a large access gate that completely soundproofs the space. This space can be accessed through the lower plaza, but it is mostly connected to the museum exhibition areas.

All levels of the museum are connected by a vertical circulation service space which includes a freight elevator, stairs, and internal service areas. Access for pedestrians, cars, and trucks is located in the south section of the lower plaza level. There is a space for trucks to load and unload material safely and comfortably. From here it’s easy to access the administrative areas and service departments. 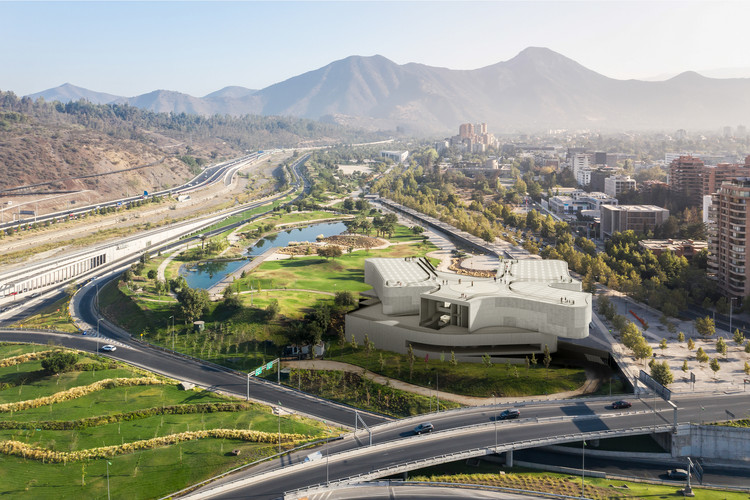 Mett all the submitted proposal teams of the NUMU competition. 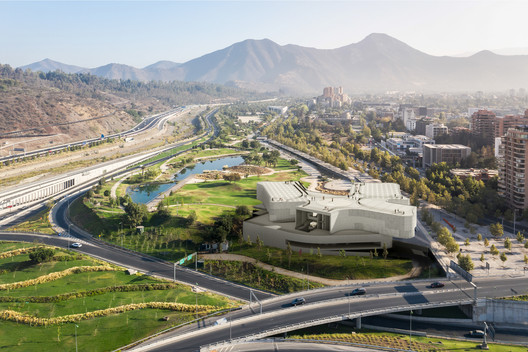