Save
Small-Scale Horizontal Properties in Buenos Aires: Building Up Rather than Out 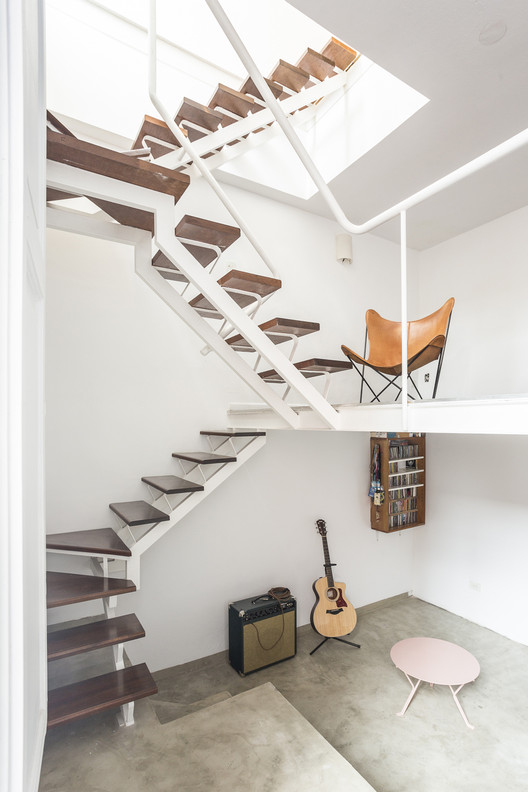 While Buenos Aires' architecture is known for its heterogenous and constantly-changing nature, within the city's low density residential sectors, it's possible to detect forms and patterns that have remained constant under the city's many transformations. One of these is the HP, or Horizontal Property, a legal concept that allows for multiple constructions on one lot, resulting in a handful of low-rise structures congregated together in a high-density layout.

The HP concept in Argentina traces its origins back to the Casa chorizo, or sausage house, that became Buenos Aires' go-to solution for housing its burgeoning population during the 19th and 20th centuries. These spaces consisted of two dwellings, situated one behind the other on narrow (8.66m) and long (sometimes as much as 50m) urban lots. The rooms of the houses were lined up in a row with patios for ventilation and outdoor space. The efficiency of the sausage house model was such that it soon became a fixture in neighborhoods throughout Buenos Aires. Of course, as styles and needs changed, the sausage house soon made way for tenement buildings and other HP layouts.

During the 1930s and 40s, HPs became the norm in part to the structural and legal ability to build onto every last square foot of a plot of land, provided that there was room left for greenspace. For the dwellings that bordered the street, light and ventilation were easily accessible. For the structures at the back of the lot, however, conditions were often cramped, dark, and poorly ventilated.

Today, with their limited space and light, these HP layouts make challenging work for the designers looking to rehabilitate and remodel them; however, this has led to new and innovative ways of utilizing space in the center of Buenos Aires' blocks.

For the designers taking on the challenge, these HPs come with their unique advantages, such as natural sound insulation and protection from the hustle and bustle of the surrounding streets. As isolated as they seem, however, they never lose touch with the surrounding landscape.

In this article, we take a look some of the creative ways that HPs are being remodeled and revamped throughout the Argentine capital and demonstrate how they respond to modern necessities without completely abandoning their classic roots.

"As the name implies, the project centers on remodeling an existing HP dwelling. The original structure adheres to quintessential Buenos Aires architecture, maintaining many characteristics from the "chorizo" houses of the early 20th century--included its limited space to build onto. To maneuver through the challenges of limited space and to preserve the original structure a best as possible, the design and building team decided to expand the structure upwards, giving the space entirely new dimensions, materials, and colors."

“The project is located in the neighborhood of Palermo, in a housing complex in horizontal property of the 40's. The PH Scalabrini Ortiz is the intervention in the last property of the series, the smallest and closest to the lung of the block. Originally conceived as the manager's home and with a total surface area of only 30 square meters, it had undergone successive transformations by the previous owners to the point of being unrecognizable. The small patio had been roofed to make better use of the surface, but had lost the possibility of expansion, light and optimal ventilation. The intervention consisted first and foremost of reopening the home's patio, understanding it as the key condition of the typology of PH dwellings. In order to recover the patio, the footprint of the building had to be taken to its minimum expression, and organized into a volume of three levels where each one absorbs a part of the program. In this way, a vertical circulation is configured where each stratum establishes a specific interaction with the courtyard and the urban landscape, graduating different situations of intimacy and relationship with the exterior."

“Set in the last unit of a long plot, PH Lavalleja coexists with the neighboring free plan, high rise residential buildings that surround it. The views from them frame the scenario in which architecture emerges, opening possibilities for public space in the interior of the block. The update consists in disassembling the existing roofs and replacing them with a continuous envelope that links the different public spaces and mediates between interior and exterior.”

“The second stage of the remodel of this HP in the Caballito neighborhood included transforming a terrace into a bedroom. When planning the expansion, the designers immediately focused on the terrace as the best starting point for adding interior space. By using a prefabricated structure, the team was able to customize and quickly insert the finished product into the structure."

"The project is located in the neighborhood of Palermo Viejo, Buenos Aires. In the last decades, this part of the city has faced a process of gentrification and intense transformation of its uses, turning a purely residential neighborhood into a cultural and commercial one, while maintaining its low density. The house is organized in 3 levels, with outdoor spaces of different scales: the access courtyard as an expansion of the living room in the ground floor, an intimate terrace linked to the bedroom in the first floor and the largest terrace as an outdoor living room in the second one. The property had undergone multiple transformations over time, leaving few traces of the original construction. Our work was not based on extending the existing area but rather on identifying and redefining connections between existing spaces through the incorporation of a new staircase in order to capture light and to frame the landscape."

"For this project in Jardín Guardia Vieja, we proposed a remodel that would return some of the original HP characteristics, namely by connecting the different parts of the house via patios. The remodel covered one of the original patios and added a staircase that allowed for the dwelling's vertical expansion, connecting the various levels of the house as well as offering optimal viewpoints of the interior space. The other patio consists of an exterior hallway that connects the first floor to the outside of the house."