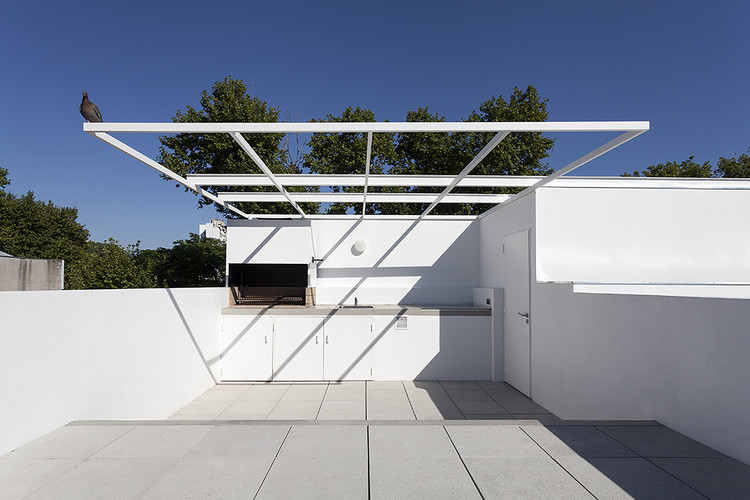 Context
The project is located in the neighborhood of Palermo Viejo, Buenos Aires. In the last decades, this part of the city has faced a process of gentrification and intense transformation of its uses, turning a purely residential neighborhood into a cultural and commercial one, while maintaining its low density. This changing process, strongly linked to the field of design, art and gastronomy, has modified the ways of occupying public space becoming a tourist and cosmopolitan area of the city.

The commercial services face the street and occupy the block’s perimeter displacing the residential uses towards the inside or above the ground floors. In this context, the commission to rehabilitate Ph Thames is presented as an opportunity to explore the way of living the center of the block caractherized by the constant presence of the sky.

Ten windows / a house
The property had undergone multiple transformations over time, leaving few traces of the original construction. Our work was not based on extending the existing area but rather on identifying and redefining connections between existing spaces through the incorporation of a new staircase in order to capture light and to frame the landscape.

The house is organized in 3 levels, with outdoor spaces of different scales: the access courtyard as an expansion of the living room in the ground floor, an intimate terrace linked to the bedroom in the first floor and the largest terrace as an outdoor living room in the second one.

The new volume of the staircase rests on a neighboring high-rise median, reducing its impact towards the patio and defining the new envelope of the house.

The project on the envelope allowed us to re-think the dialectic between view and facade, by organizing a series of spans of different but proportional sizes which solve in each case the problems of lighting, ventilation and physical or visual connection between inside and outside. Despite the small surface, the arrangement of the openings allows deep perspectives and a framed perception of the outside from all its insides.

We worked with a very limited range of materials, emphasizing the continuity of the white walls in order to increase the reflection effect of natural light. The original wood floors (pinotea) were recovered and partially reused for the construction of sliding patio doors.