With museums in Stockholm, New York, and Tallinn, Fotografiska has announced plans to launch its fourth space in Berlin. Expected in 2022 in the Kunsthaus Tacheles to be renovated by Herzog & de Meuron, the contemporary Swedish photography museum will cover over 59,000 square feet.

Initially built as a department store in 1908, before being converted into a Nazi prison during World War II, then rehabilitated as a gallery from 1990 till 2012, the Kunsthaus Tacheles has experienced multiple demolition and renovation works. An important cultural heritage, the building will take on a few new interventions. In fact, the damages caused in World War II will be kept intact, whereas the façade and some spaces will be rehabilitated. On that note, Fotografiska announced that “Kunsthaus Tacheles is listed as a cultural heritage site. It has therefore been decided in close consultation with the responsible authorities that the facade and certain rooms in the building will be restored. Damages from the war, as well as artistic choices made over the past 80 years, will be retained and even made visible”.

Kunsthaus Tacheles is part of the development scheme for the Am Tacheles site, designed by Herzog & de Meuron. Appointed several years ago, the architecture firm was facing one of the last big gap sites in Berlin's Mitte district. Incorporating the historic fabric in the re-creation of an enclosed block, the project restores the fragment’s geometrical presence. According to Herzog & de Meuron, “the basic objective behind the Am Tacheles design concept is to create a piece of the city that has due regard for human scale and emanates a certain intimacy. To create an urban structure that is robust and direct in both its constructional detailing and mix of materials. And to create an attractive, bustling urban space that serves the community and the individual alike”. Moreover, in their 2016 statement, the architects announce that the Tacheles building will be integrated into the master plan and revitalized through the planned use as a culture venue, recapturing the site's deep historical significance while continuing and developing the narrative.

Promoting constructive dialogue with the community, Fotografiska was founded first in Stockholm in 2010. In 2019, the museum inaugurated both the New York and Tallinn, Estonia, branches, and the Berlin location is expected to debut in 2022.

Simply entertaining our audience with photography is not enough to my mind: Fotografiska wants to foster and initiate changes. Innovation, inclusion, inspiration, and sustainability are core elements of our work in this regard. In the years after the fall of the Wall, Tacheles was home to a group of artists who thought outside the box. It is time to continue that effort: Fotografiska is a community open to all - just like Berlin. -- Yoram Roth. 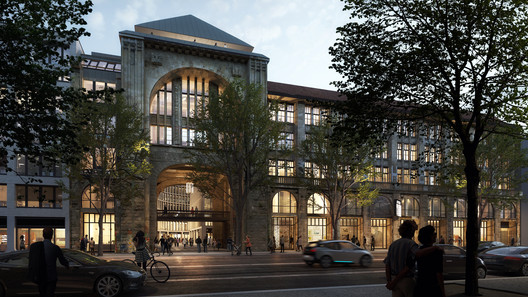